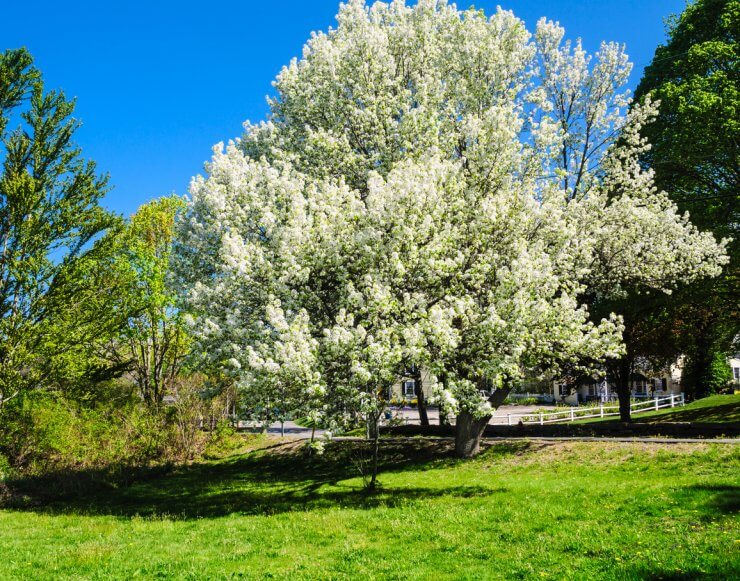 While our focus is on pear trees that bear fruit that humans can enjoy, it is worth mentioning the Bradford and Callery flowering pear trees. They’re lovely to look at, but their fruits are tiny and hard. Growers brought the Callery pear (Pyrus calleryana) to the U.S. in 1909 to help limit the spread of fire blight in pear orchards; Callery flowering pears are very resistant to fire blight.

In the 1960s, growers developed the Bradford pear tree (Pyrus calleryana “Bradford”) from Callery pear trees. It was considered an improvement in ornamental trees: the Bradford produced a profusion of white flowers, but lacked the nasty thorns of the Callery.

The original Bradford pear tree was not self-pollinating, so it couldn’t produce viable seeds. But that changed as growers developed more cultivars from the Bradford. The resulting hybrid trees had nasty thorns like the Callery and grew fast, making them hard to control. The crossbreeding resulted in viable seeds that birds scattered after eating the tiny, hard fruits from the trees.

These trees, originally promoted as landscape features, can actually be a hazard. Bradford trees can grow up to 30 feet; their weak branch structure makes them dangerous to be around. As the tree ages, the risk of falling branches increases. These trees usually fall apart under their own weight within 20 years. The long thick thorns of the Callery pear tree are impervious to traditional tractors, and these trees can choke out native trees.

Once considered helpful and/or ornamental, forestry officials now recommend you cut down any Bradford or Callery pear trees on your property, and treat the stump with herbicide to guard against any sprouting.

Did you know that some pear trees could be so hazardous? Have you ever grown or seen Bradford or Callery pear trees? Please tell us what you think in the comments below.