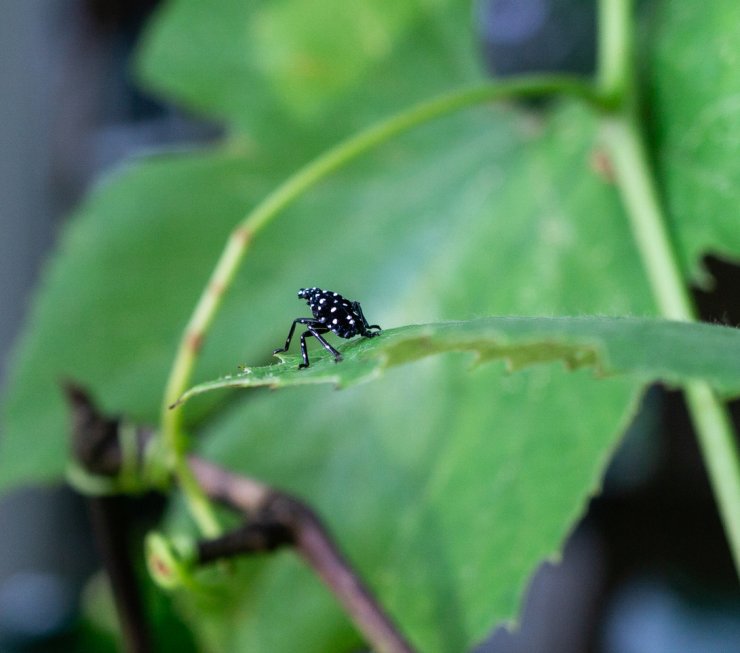 Like any plant, grapevines are attractive to a number of pests. As with disease, it’s critical that you remain vigilant about spotting invaders and dealing with them promptly. Most insect and other problems can be reduced by planting vines in a sunny location with good air circulation.

You can also combat pests with neem oil and sprays containing potassium bicarbonate. 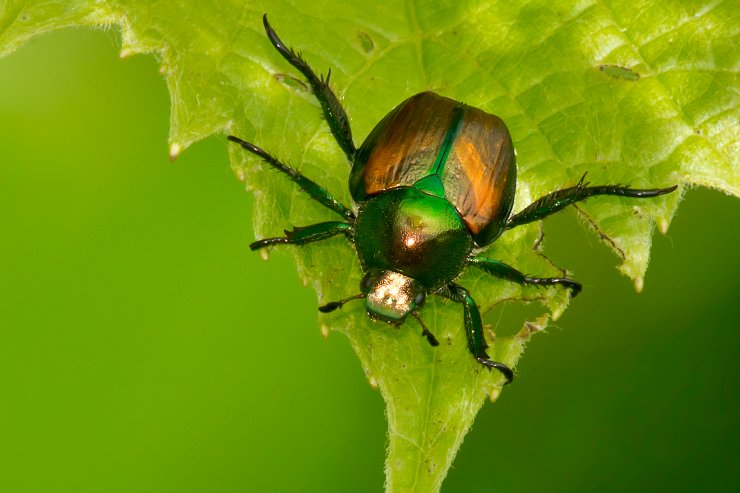 Coppery-winged Japanese beetles feed on a wide variety of flowers and crops (the adult beetles attack more than 300 different kinds of plants), but in terms of garden plants, they are especially common on grapes, as well as roses, beans, and raspberries. Here’s what to look out for:

Skeletonized leaves and flowers: Japanese beetles can devour most of the foliage on favored plants, as well as the flowers. Look for leaves that are “skeletonized” (i.e., only have veins remaining). This is a tell-tale sign of Japanese beetles. Japanese beetles are not usually far from damaged leaves, so inspect the plant thoroughly. Look for beetles and their damage beginning in late June or early July through August.

How to get rid of Japanese beetles: Having Japanese beetles on a plant attracts more beetles, so it’s important to prevent accumulation. The best control for home gardens is to check your plants often, at least twice a week, and ideally in the morning when they’re less active. Hand-pick or knock beetles into a pail of soapy water.

If hand-picking is just not doable, stick with the sprays mentioned above. (Note: Neem oil can be harmful to aquatic life, so limit its use near bodies of water.)

You can also shake off the beetles onto a drop cloth in the early morning when they’re most active. Always drown beetles in soapy water. Another alternative is Japanese beetle traps, which can be effective, but can also attract beetles into your garden. Place them far away from your grapevines so you don’t exacerbate the problem instead of solving it. 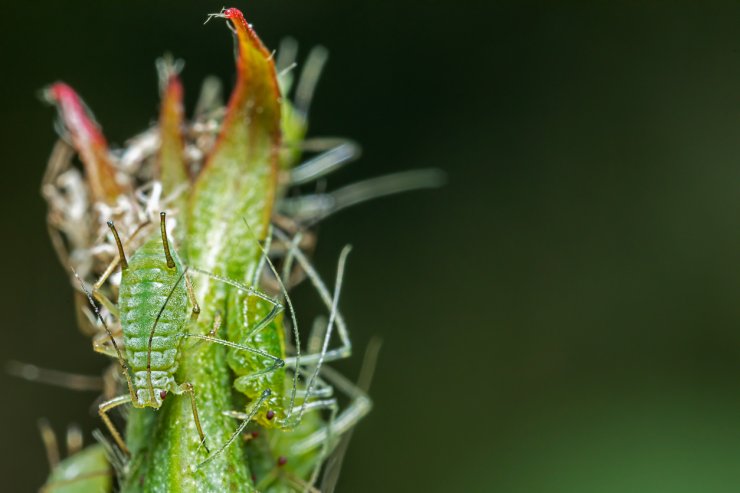 Aphids on a plant.

Aphids are also fond of grapevines. Aphids seem to find their way into every garden. They are small, soft-bodied insects that feed by sucking the nutrient-rich liquids out of plants. In large numbers, they can weaken plants significantly, harming flowers and fruit.

Aphids multiply quickly, so it’s important to get them under control before reproduction starts. Many generations can occur in one season. The good news is that they tend to move rather slowly and aphid control is relatively easy.

Aphids are tiny (adults are under 1/4-inch), and often nearly invisible to the naked eye. Various species can appear white, black, brown, gray, yellow, light green, or even pink! Some may have a waxy or woolly coating. They have pear-shaped bodies with long antennae; the nymphs look similar to adults. Most species have two short tubes (called cornicles) projecting from their hind end.

Nymphs and adults feed on plant juices, attacking leaves, stems, buds, flowers, fruit, and/or roots, depending on the species. Most aphids especially like succulent new growth. Here’s how to identify aphid damage:

Leaves: Look for misshapen, curling, stunted, or yellowing leaves. Be sure to check the undersides of leaves; aphids love to hide there.

Leaves or stems: If the leaves or stems are covered with a sticky substance, that’s a sign that aphids may have been sipping sap. This “honeydew,” a sugary liquid produced by the insects as waste, can attract other insects, such as ants, which gather the substance for food.

Flowers or fruit: These can become distorted or deformed due to feeding aphids.

Aphids may transmit viruses between plants, and also attract other insects that prey on them, such as ladybugs.

How to get rid of aphids

Try spraying cold water on the leaves. Sometimes all aphids need is a cool blast to dislodge them. Typically, they’re unable to find their way back to the same plant.

If you have a large aphid invasion, dust plants with flour. It constipates the pests.

Neem oil, insecticidal soaps, and horticultural oils are effective against aphids. Be sure to follow the application instructions provided on the packaging.

You can often get rid of aphids by wiping or spraying the leaves of the plant with a mild solution of water and a few drops of dish soap. Soapy water should be reapplied every two to three days for two weeks.

Diatomaceous earth (DE) is a non-toxic, organic material that will kill aphids. Do not apply DE when plants are in bloom; it is harmful to pollinators, too.

Isopropyl alcohol (also called isopropanol or rubbing alcohol) works fine and is easy to find, but be sure it doesn’t have additives. Ethanol (grain alcohol) seems to work best. Alcohol usually comes in 70 percent strength in stores (or 95 percent strength purchased commercially).

You can also add alcohol to a soapy emulsion to make it more effective. For example, in a spray bottle, combine 5 cups water, 2 cups alcohol, and 1 tablespoon liquid soap.

How to prevent aphids

If you find you have a long-term problem with aphids, try these methods for preventing infestations.

Beneficial insects, such as ladybugs, lacewings, and parasitic wasps, will feed on aphids. Supplemental populations of these insects can be ordered online and should help keep the aphid populations controlled from the start.

Companion planting can be very helpful to keep aphids away from your plants in the first place. For example, aphids are repelled by catnip. 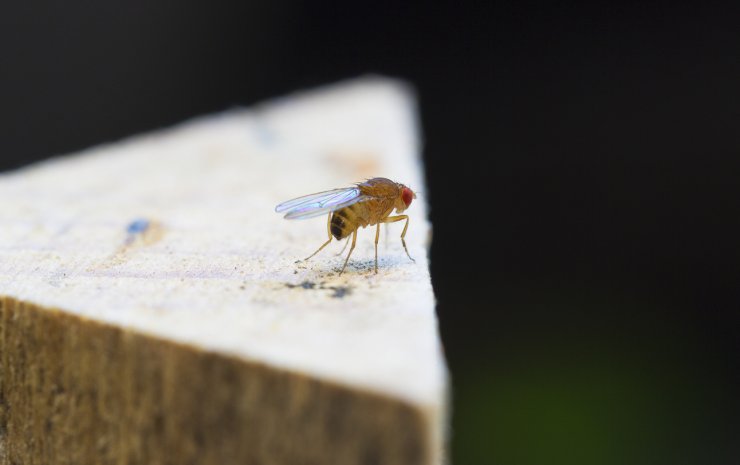 Spotted wing drosophila on a piece of wood.

This invasive fruit fly prefers strawberries and raspberries, but also feeds on grapes. This pest can do significant damage in large numbers and is monitored by many states. Consult your county extension service if you believe you’re seeing it.

Fruit: SWD deserves notice because, unlike its relatives, which lay eggs on over-ripe or rotting fruit, it can lay eggs inside fresh fruit, often before harvest. After only a few days, the fruit skin becomes dimpled or wrinkled, forming craters in the fruit.

How to handle SWD

Excellent sanitation will reduce SWD populations. Fruit should be harvested frequently and completely to prevent the buildup of ripe and over-ripe fruit.

Infected fruit should be removed from the field and either frozen, “baked” in clear plastic bags placed in the sun, or disposed of in bags off-site. This will kill larvae, remove them from your crop, and prevent them from emerging as adults.

Canopy and water management will make the environment less favorable. Prune to maintain an open canopy, increase sunlight, and reduce humidity. This will make plantings less attractive to SWD and will improve spray coverage. Allow the ground to dry before irrigating.

Insecticide sprays will kill SWD adults and thereby reduce egg laying. Treatments should be applied at least every seven days and repeated in the event of rain. 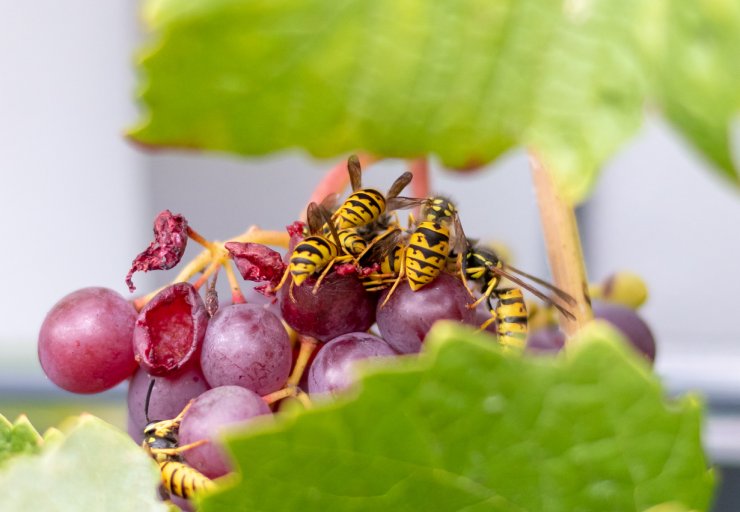 Yellow jackets and multicolored Asian lady beetles may feed on ripening grapes, damaging the fruit and promoting fungal disease infection. The best prevention is harvesting grapes as soon as they are ripe. 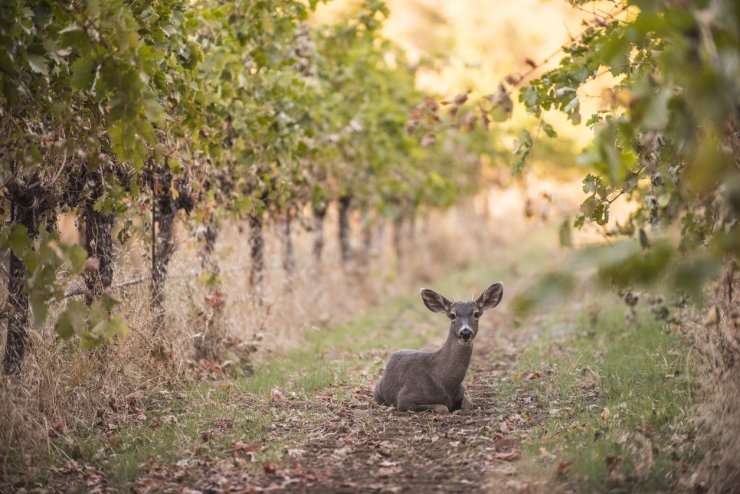 Birds are attracted to the ripening berries and can eat them all before you are ready to harvest. The only foolproof method of protection is netting to cover the ripening fruit on the vine.

Deer and raccoons may need to be kept out with a fence if they prove to be a problem.

Have you had pests infesting your grapevines? Please share with us your successful methods for dealing with pests.