If you can’t already tell from my How to Throw a Backyard Pizza Party from Your Garden video tutorial in our August 2021 issue, I am, like most people, a big fan of pizza—specifically homemade and loaded with garden veggies.

And according to the Disney/Pixar movie called WALL-E, you can grow your own pizza garden. If you haven’t seen the movie, it’s really adorable and fun. The film centers on the adventures of a small waste-collecting robot stranded on earth hundreds of years after humanity has covered the planet in garbage and left to live on a massive spaceship. I won’t go into details that might give away the plot, but the humans are so far removed from nature that when they eventually return to earth, they believe they can plant a literal pizza, and it will grow.

Indeed, I can appreciate the sentiment. It would be nice to plant a slice of that unforgettable New York pizza and have it grow in my garden. Imagine! Thin crust pizza straight from the garden! Obviously, you can’t do that. But you can get pretty darn close.

You may still have to make or buy your own crust. And you can’t really plant cheese in a garden. Everything else, though, you can pretty much harvest straight from your garden. You can grow the ingredients you need for sauce and many of the toppings you might want.

It’s the perfect food for a garden/pizza party. Invite your friends over, have them pick their favorite toppings from the garden, and start cooking. Here’s what that might look like. 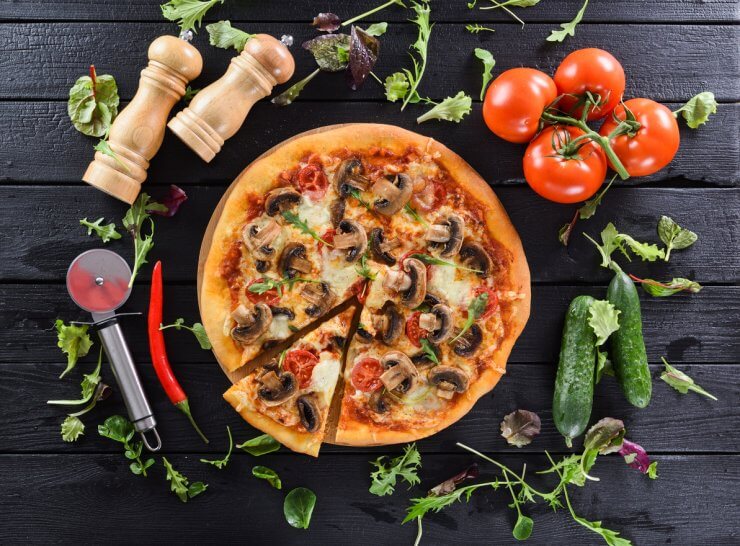 Grow your own pizza garden and enjoy the best pizza ever

If you want to grow your own pizza garden, start by thinking about what you need to make pizza sauce and what topping you want on your pizza.

The essentials are tomatoes, onions, garlic, and herbs like oregano and basil. From there, you can add other vegetables like green and red peppers or spinach. You could even go with eggplant or butternut squash. (Seriously, roasted butternut squash and sage on pizza is heavenly!)

The potentially tricky ingredient when you grow your own pizza garden is garlic. Because it takes so long to mature, you need to think ahead. That said, it’s also incredibly easy to grow. You just plant your cloves in the ground in the fall and forget about them. Then in late spring, you have fresh garlic.

On the other end of the spectrum, most herbs are very forgiving and easy to grow. Basil is a great companion plant for tomatoes, while oregano has a well-deserved reputation for deterring garden pests. I usually have rosemary and thyme in the garden, too. They don’t take up much space in the garden, and they make an excellent addition to sauces or just to sprinkle on pizza before it goes in the oven.

So what is all of this going to look like? You don’t actually need many plants to grow your own pizza garden. Three or four tomato plants, two basil plants, one oregano plant, three or four onions, and a garlic plant is probably your minimum, but you can plant as much as you want.

The nice thing is that you can grow all of these plants in containers or in a small raised bed, so you don’t even need a lot of space. So while you can’t put a slice of pizza in the ground and have a hot pizza 90 days later, you can get pretty close with these vegetables.

And if you haven’t yet watched my How to Throw a Backyard Pizza Party from Your Garden video, do that now. I have a dough recipe that is grill-friendly and a delicious array of flavor combinations for toppings!

What do you think? Have you tried to grow your own pizza garden? I’d love to read your story in the comments.