Harvesting and Pruning your Tomatoes 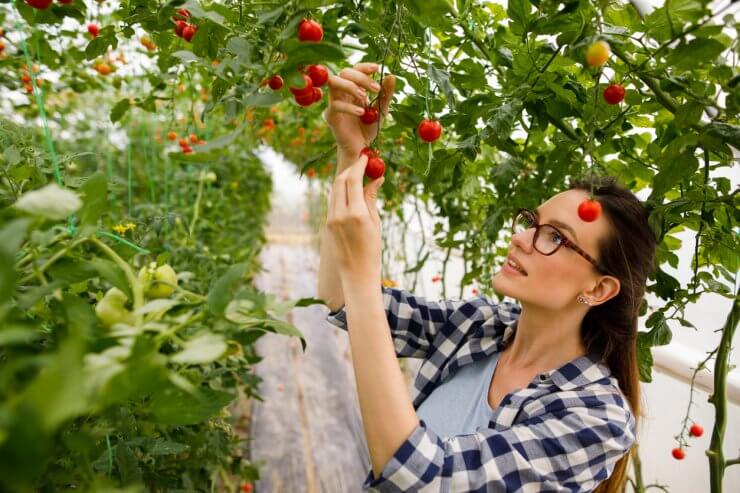 One of the fun things about tomatoes is that you can harvest them before they’re actually ripe; those are the green tomatoes that you so commonly see in southern cuisine, battered in cornmeal and fried, or pickled, or even turned into salsa. Every tomato starts off green and then ripens to its intended color like red, yellow, orange, and sometimes even green, like Green Zebra.

When you do go to pick your perfect tomato, don’t just yank it off the plant; that may damage the plant and could jeopardize future ripe fruit. Use a knife or garden scissors to make a clean cut, separating the stem of the fruit from the plant. If you harvest some of your tomatoes, your plants will keep producing flowers to set more fruit, so pick away!

If you have frost in the forecast and your tomato plants are in the ground or in raised beds, pick any tomatoes that look remotely ripe, then protect the remaining plants with a row cover. Row covers can increase the heat around your plants and protect them until the temperature drops below 25 degrees F; then growing season is definitely over.

Tomatoes can stay fresh on the counter for a week or so, and green tomatoes can be placed on the counter upside down for a few weeks until they ripen. They’ll ripen fastest in a warm room, and slower in a cold room.

As mentioned above, green tomatoes can turn ripe in a couple of weeks if you bring them inside and leave them on a windowsill or countertop.

Eating hard green tomatoes isn’t the best idea. All nightshades, like tomatoes, eggplants, and peppers, contain solanine. You probably already know not to eat green potatoes because of this alkaloid, but most seem to avoid the subject when it comes to tomatoes.

Solanine is one of the ways nightshades protect themselves and attempt to keep from being eaten. As tomatoes grow from green to red, the levels of solanine reduce almost completely.

There are two major toxic alkaloids in tomatoes—solanine and tomatine. Solanine (the most potent toxin) is in the fruit, while tomatine (less potent) is in the leaves and stems.

The good news is that even if you eat a hard-as-a-rock green tomato, you’ll probably survive. You may not even get a bellyache—but you might. The thing about toxins is that they accumulate in your body and take time to flush out. So if you were busy having fried green tomato parties every afternoon for lunch, you might notice symptoms, but it would still matter just how unripe the tomatoes are. Or if you already have arthritis or another type of inflammation, you may also notice it more than, say, a spry teenager.

How can you tell if a green tomato shouldn’t be eaten? Well, is it hard? Is it bitter? If so, it’s probably high in the poisonous alkaloid solanine. Is it turning yellow or red? If so, it will have a considerably lower concentration. Chefs that make fried green tomatoes aren’t using the hard green tomatoes or they’d taste terrible, they’re using ones that are just starting to turn.

You might also wonder when you can eat green varieties like Green Zebra (my favorite) or Limetto. The good news is that just like red tomatoes, they’ll be tender to the touch when they’re ready.

The most important thing you need to know about how to prune tomato plants is how to identify the “suckers.” These are the branches of your tomato plant that can either drain energy when left to grow, or give it to the tomatoes when they’re trimmed off.

To find the suckers, look at your tomato plant. You have the main stem, and then you have a regular branch. At the axis between the stem and branch, an extra branch often pops up, which is called a sucker. These are easiest to identify when the plant is still young. If you let them grow, they’ll just grow flowers and tomatoes, so they’re not a danger. But if you prune them off, your plant will have better aeration and will grow bigger and better tomatoes on the rest of the plant. 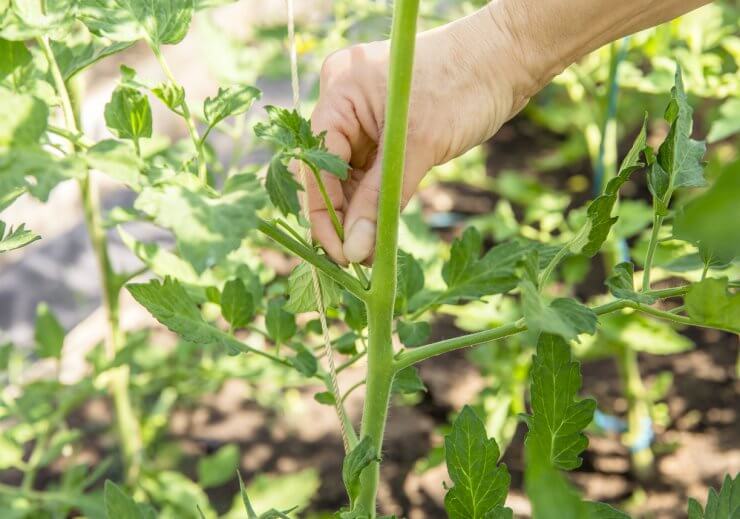 Ideally, prune early in the season, before the plants start getting unruly, when you can easily find the suckers and differentiate them from the central stalk.

Done correctly (aka not killing them) pruning will give you bigger, better tomatoes. If you’re wondering how to prune tomato plants for maximum yield, follow the tips above.

But first, if you’re pruning multiple plants, make sure to clean your pruning shears with alcohol in between, so that you don’t spread any disease from one plant to another!

When do you harvest your tomatoes? Do you wait until they’re perfectly ripe or let them ripen on the counter?