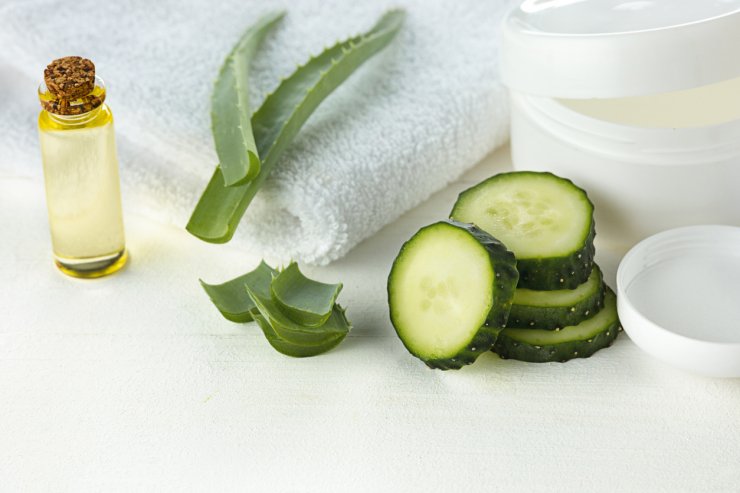 You’ve seen it in movies and on TV a hundred times: whenever there’s a scene set in a spa, they show a woman with a towel wrapped around her head, a thick beauty mask on her face, and cucumber slices on her eyes. It’s a cliché, but it’s true: cucumbers do help reduce skin puffiness. But they have so much more to offer for your health and beauty!

Heart disease, including heart attacks and strokes, is the number one cause of death in the United States. The antioxidants in cucumbers have been linked to lower blood pressure. They also show benefits against inflammation.

Cucumbers are also high in vitamin K. Vitamin K is a fat-soluble vitamin that makes proteins for healthy bones and normal blood clotting. According to the Harvard School of Public Health, vitamin K helps produce four of the 13 proteins needed for blood clotting. If you are taking blood thinners, medical professionals often recommend you take in a steady supply of vitamin K.

Several test tube and animal studies have indicated that cucumbers may help reduce blood sugar and prevent some of the complications of diabetes. In one study, mice were induced with diabetes and then fed cucumber peel extract. The cucumber peel reversed most of the diabetes-associated changes and caused a decrease in blood sugar.

Cucumbers have a reputation as the perfect diet food, and it’s easy to see why: they are low in calories, provide freshness and flavor to salads and sandwiches, and their fiber makes them filling. In addition, the high water content in cucumbers keeps you hydrated, which can promote weight loss.

Cucumbers provide your body with water and fiber, two nutrients that are essential to preventing constipation. In particular, pectin, the type of soluble fiber found in cucumbers, can help increase bowel movement frequency. A study on humans showed that pectin not only sped up the movement of intestinal muscles, it promoted beneficial bacteria in the gut.

Studies have noted links between the compounds in cucumbers, such as cucurbitacin B, may slow the growth and spread of prostate cancer cells. One study also showed that these compounds could target brain tumors, though more research is needed.

The cucumber skin has been known to suppress an enzyme in the body known as TOR, responsible for regulating the cell growth and dividing cycles. Cucumber seems to be one the foods that can turn the enzyme down. presumably helping protect against cancer.

Cucumbers are considered beneficial for skin health and anti-aging. The cucumber’s cooling properties have been used topically for centuries to decrease skin inflammation, reduce fevers, and treat skin redness and sunburn.

As noted above, cucumber peel contains the enzyme TOR that regulates cell growth and division—aging, in other words. So, be sure to eat the cucumber peel for its anti-aging properties!

Cucumbers contain vitamin A which has been shown to promote skin and eye health. And not only do cucumbers contain water that hydrates your body, including your skin, they contain polysaccharides, which help the skin attract and retain moisture.

While some further medical studies might be required to confirm the health benefits of cucumbers, eating your own home-grown varieties is a great way to control what you eat, ensure a healthier diet, and look better, too!

Did you know that cucumbers can be so healthful? Please tell us about healthy ways you use cucumbers.