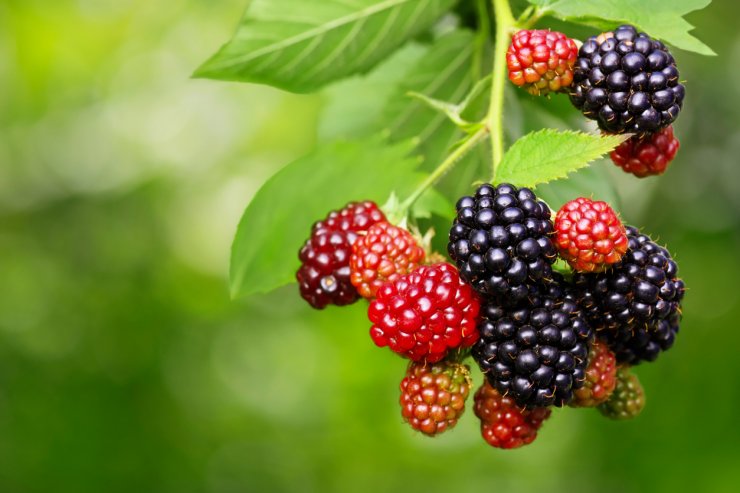 This delicious native berry, closely related to raspberries, is so easy to grow, it’s known as an invasive nuisance in many parts of the country, growing wild in fields, farms, and forests. Many people pick wild blackberries to get this luscious fruit.

But if you don’t have access to wild berry bushes, this guide will show you how to grow them in your backyard—keeping them contained in one place so as not to lose the whole garden to them—as many gardeners do. The blackberry is a long-lived perennial, meaning a plant will last you 15 to 30 years or so, with a modest amount of work involved.

And you’ll find yourself picking fruit every couple of days, so abundant will your harvest be! A single healthy blackberry plant can supply up to 10 pounds of berries per year.

The blackberry is, of course, the star of cobblers, pies, jams, and jellies. But it’s also perfect to eat as a stand-alone snack, and perfect in salads, marinades, syrups, breakfasts, and other desserts. Their sweet yet tart taste delights the tongue anytime you eat them.

And the blackberry is so abundant, it’s mixed up its taxonomy over the centuries, meaning there are more than one species due to cross-pollination and hybridization. Some blackberries are Rubus canadensis, while others are Rubus fruticosis, and so on. You’ll more often find them mentioned simply as Rubus spp. as a way of referring to the many different species all at once.

Interestingly, blackberries as a genus are a member of the family Rosaceae, which means they’re related to roses!

Because they are native to North America, they are adapted to the soil and climate here, and are frequently found growing wild in USDA Plant Hardiness Zones 3 through 10. They are especially abundant in areas with warm summer days, cool nights, and plenty of moisture.

In fact, blackberries grow in their native state on every continent except Australia and Antarctica—so you know you’ll be able to grow them successfully in your back yard.

Wild blackberries have annoying thorns (as do some hybrids), but there are many varieties that have been bred today without thorns, so you don’t have to hurt yourself picking your crop. Blackberry hybridization was largely initiated by Luther Burbank, the legendary horticulturist in the early part of the 20th century.

Most cultivars of blackberries, again like raspberries, are self-fruitful and do not require pollinators. That’s one reason why they’re so pervasive in our wildlands and in the garden. You’ll have to maintain vigilance to keep your blackberry bramble contained to its spot, snipping off suckers around the main bush and corralling the branches, or canes, to a trellis.

Just remember, the ease of growing blackberries makes them a rewarding plant to have in your garden. Don’t be afraid to give them a try—you’ll be glad you did.

A Brief History of Blackberries 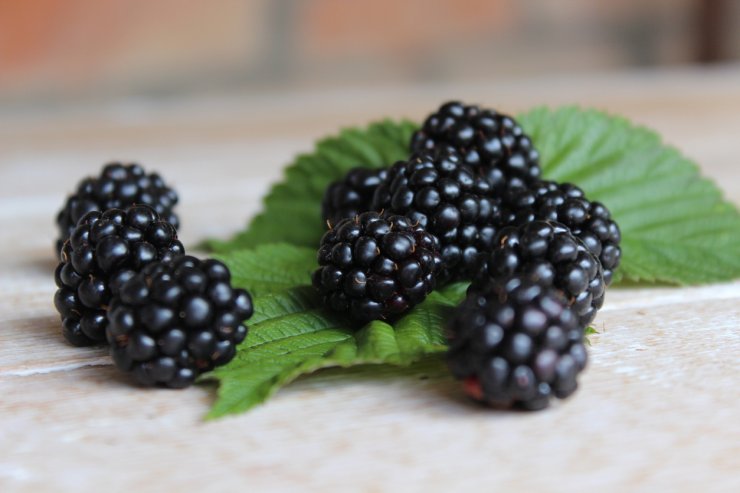 Blackberries are native to Asia, Europe, North America, and South America. Blackberries have been used in Europe for over 2,000 years, for eating, medicinal purposes, and as hedges to keep out marauders.

Blackberries were perceived by the ancient cultures as being a wild plant, and not many historical accounts for blackberry culture exist. But the Greeks used the wild blackberry as a remedy for gout, and the Romans made a tea from the leaves of the blackberry plant to treat various illnesses.

One of the earliest known instances of blackberry consumption comes from the remains of the Haraldskær Woman, the naturally preserved bog body of a Danish woman dating from approximately 2,500 years ago. Forensic evidence found blackberries in her stomach contents, among other foods.

The use of blackberries to make wines and cordials was documented in the London Pharmacopoeia in 1696. As food, blackberries have a long history of use alongside other fruits to make pies, jellies, and jams.

In Western culture, the use of blackberry plants for medicinal purposes has a long history. Native Americans along with other European peoples chewed the leaves or brewed the shoots into tea to treat mouth ailments such as bleeding gums and canker sores.

Tea brewed from the leaves, roots, and bark was also used to treat pertussis. In fact, the roots, which have been described as an astringent, have been used for the treatment of intestinal problems such as dysentery and diarrhea. The fruit, which has a high vitamin C content, may have been used for the treatment of scurvy, and there is a 1771 document that recommends brewing the leaves, stem, and bark for stomach ulcers.

Blackberry fruit, leaves, and stems have been used to dye fabrics and hair (the color is actually a deep purple), and Native Americans have been known to use the stems to make rope. Thorny blackberry shrubs have even been used as barriers against enemies and wild animals.

As far as modern development of the blackberry goes, it began in America with a Judge Logan of California in 1880, who introduced the hybrid loganberry.

Did you know that blackberries had such a diverse history? Tell us if you find this information interesting. 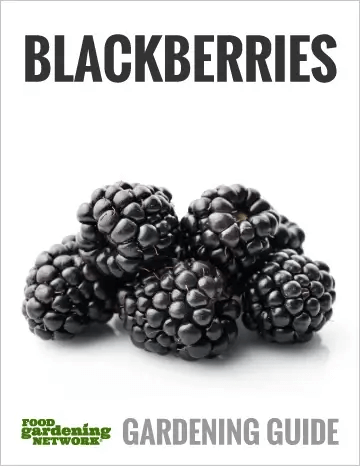