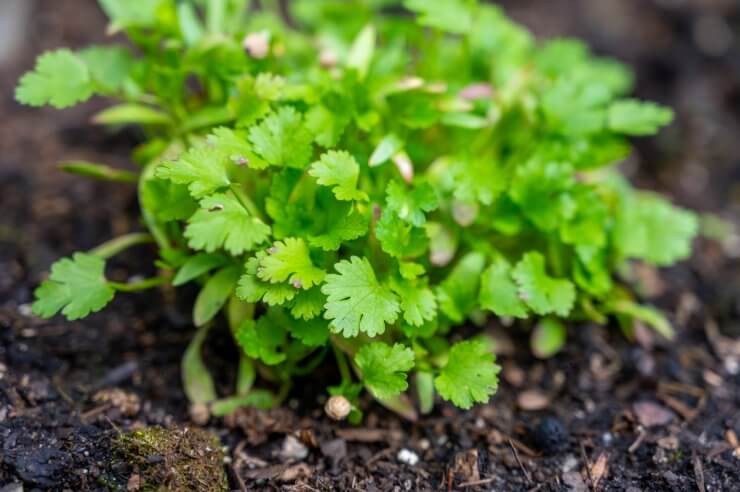 Growers break cilantro into four categories: leaf, seed (called coriander), Vietnamese, and culantro—which is not actually the same plant. All cilantro plants have both leaves and seeds, but some varieties are better for producing one or the other.

Leaf cilantro. Resembling parsley with flat, toothed leaves, leaf cilantro has a pungent flavor and also goes by Chinese parsley or Mexican parsley. If a long harvest of cilantro leaves is your goal, make sure your cilantro has partial shade during the hottest days, or choose varieties that are slow to bolt (shoot up and go to seed). Long Standing and Leisure are two varieties known for not going to seed in the warmer months. Calypso is another slow-to-bolt cultivar. Use leaf cilantro to make salsas, soups, salads, main dishes, and as a garnish.

Coriander. Coriander is not a different type of cilantro; it is the seed of the cilantro plant and is considered a spice rather than an herb. Its flavor is more earthy and spicy than the leaf form. If a plentiful supply of seeds is your goal, allow your plants to bolt or choose a variety that is not bolt resistant. Santo is a prolific variety that begins to produce seeds about 10 days earlier than slower bolting types. Use whole coriander seeds to pickle foods, or grind them to add piquancy to baked goods, roasts, and stir-fries.

Culantro. Culantro is not the same plant as cilantro, but a botanical cousin, with a significantly more pungent aroma and flavor. While cilantro is a delicate herb often added at the very end of cooking, culantro can handle high cooking heat. Culantro looks quite different from cilantro, with long, serrated leaves that grow like lettuce. Cook with it in almost any recipe where you would employ cilantro, but use it far more sparingly.

Which type of cilantro have you grown? Do you have a preference? Please share your opinion.