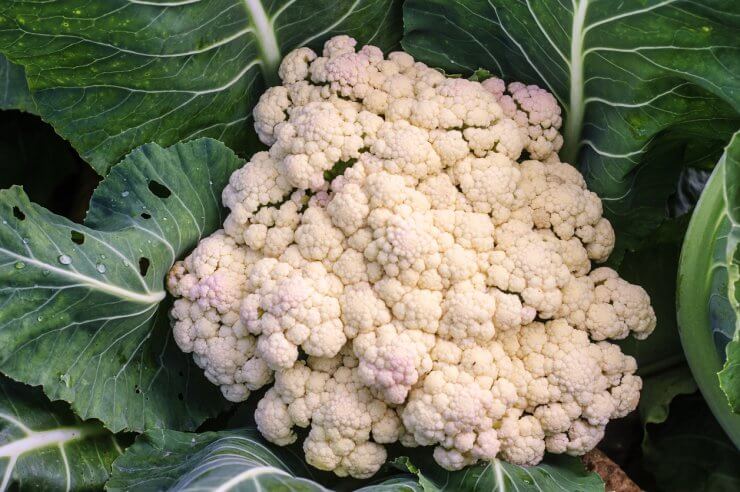 Because cauliflower is so sensitive, there are a number of common problems to watch out for in the head of the plant. Unfortunately, these problems can leave you without an edible head, so pay attention to prevention and treatment advice. 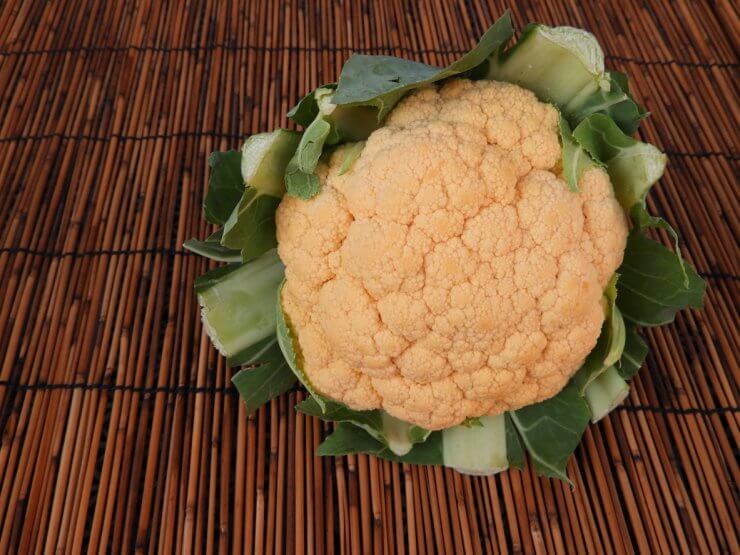 If you’re not growing a colored variety and are expecting a nice white head, but you get color anyway, there are several possible reasons. Browning of the head indicates a lack of boron in the soil. This can be prevented by mixing in enough nutrient-rich compost when you plant. If you get browning of the head anyway, drench the plant with 1 tablespoon of borax in 1 gallon of water. (Don’t get the boron on other plants.)

Alternately you can apply liquid seaweed extract immediately, repeating every two weeks until the browning disappears.

You may also see some pinkish hues creeping into your heads. This is usually because of too much sun exposure or temperature fluctuations. Stay on top of this by using your floating row covers to even out high and low temperatures and provide shade.

You may get some pink or purple on a white head, which can be due to stress or low soil fertility. Prevent this by using compost and fertilizer, maintaining temperatures with row covers, and providing continuous water. Heads that blush due to environmental conditions may become more bitter, though there are those who say that a little bit of color makes them sweeter!

Other measures to prevent head discoloration include choosing only plants that are suited to your region, and planting so that heads mature either before or after summer’s heat.

Blanching helps shield cauliflower curds from direct sunlight. There are varieties that are self-blanching, but even they may require some help. For more on blanching, see the article titled “Blanching and Harvesting.” Failure to blanch may lead to curds that turn green or yellow. You may also see brown scorched patches, which you can cut off while still eating the remaining part of the head. 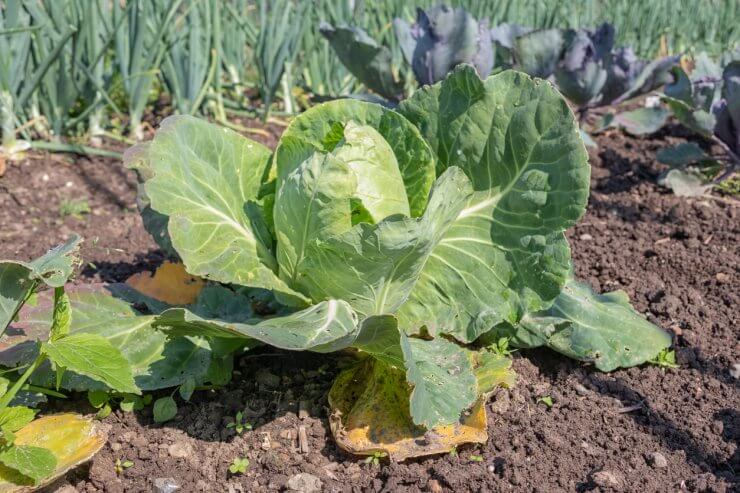 There are diseases such as bacterial soft rot, cauliflower mosaic virus, and powdery mildew that can cause not only head discoloration, but symptoms such as a brown, black, or gray fuzzy, weepy, or dusky appearance. These diseases usually affect the leaves too, and are often ushered in by insects or extended wet weather.

Discard any curds that have blemishes from diseases, especially if there’s a bad smell and/or a mushy consistency.

This is a condition in which there is no head, despite the plant having plenty of leaves. It’s can be caused by genetic deficiencies in the seed, or by physical damage to the central growing point by disease, animals, or insects. It can also be caused by temperature extremes.

Be sure to select good quality seed that is not known be prone to blindness, and use floating row covers to protect from environmental stressors. Choose plants that are suitable for your growing zone, and don’t start them too early or too late. 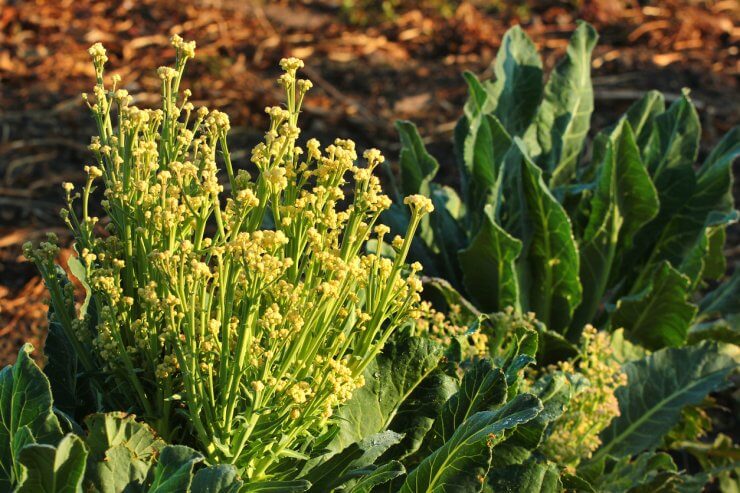 Bolting is when the plant runs to seed and stems instead of forming a head. It often happens during the early vegetative stage. Once a center stalk has formed, flowered, and set seeds, there will be no head.

Bolting occurs when there’s a sudden fluctuation in temperature early in the plant’s development, and is especially likely to occur if seedlings are transplanted to the garden too early in spring.

To avoid bolting, make sure the seeds you sow or the starters you plant are suited to your zone, making sure the days to maturity match the length of your growing season, whenever that is for you.

Starting seeds indoors helps protect plants from a late-spring freeze, and you can use floating row covers and mulch to protect against temperature extremes. Also make sure that plants don’t dry out during heatwaves.

A cauliflower head that has “buttoned”]

Plants that encounter a stressor when it should be putting on foliage can shift to head development prematurely. This leads to separate, button-like florets instead of a whole head of florets.

Other causes of buttoning include a lack of nitrogen in the soil, transplanting too long after the seedling stage, or improper hardening off. Putting seeds or seedlings into the ground too soon in spring or too late in fall may also cause buttoning.

Another cause could be a plant that dries out or becomes oversaturated, or insects and diseases that cause stress.

All of these things can be avoided, starting with checking the nutrient content of your soil in the first place and using a well-balanced fertilizer. Plant when appropriate and acclimate plants to the outdoors. Again, choose varieties that are suitable to your region, and avoid short-season, early-maturing varieties that lack a long vegetative period. 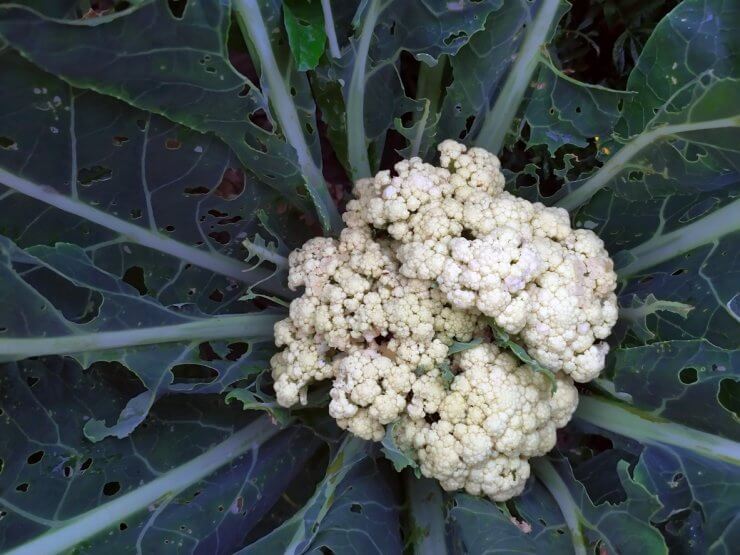 Obviously an ideal head is a compact group of florets with tight curds. However, sometimes the head will split into separate florets if it has been stressed. A wet spell during the final maturation stage can cause head splitting, as will waiting too long to harvest.

To avoid this, make sure your soil drains well and you’re not overwatering, and pay attention to harvest schedules for the variety you planted. 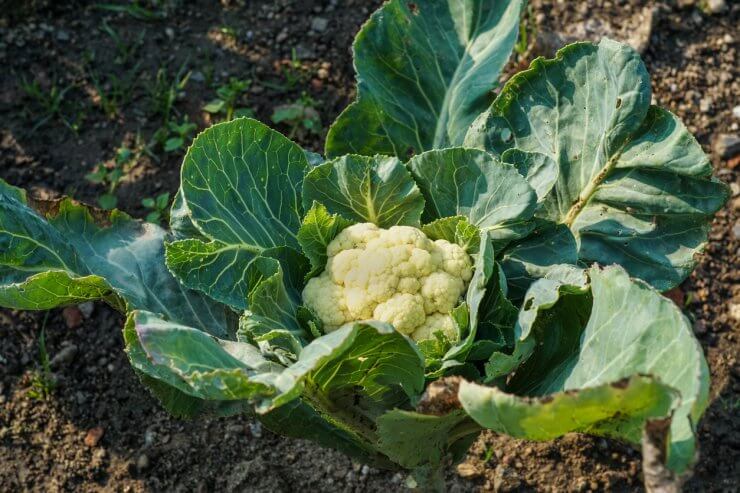 Cauliflower with the beginnings of leaf tipburn

This is a condition that starts with leaves and can move on to cause head damage. Inner leaves turn brown on the edges, leading to discoloration of the florets. This makes the plant vulnerable to disease.

Leaf tipburn can be caused by a lack of calcium or too much nitrogen in the soil, high temperatures, and/or lack of watering. Again, a soil test and remediation, such as the application of lime, is your best bet at prevention. Shade row covers can help protect against high temperatures, and proper watering is helpful.

As with other conditions above, plant only varieties recommended for your region. 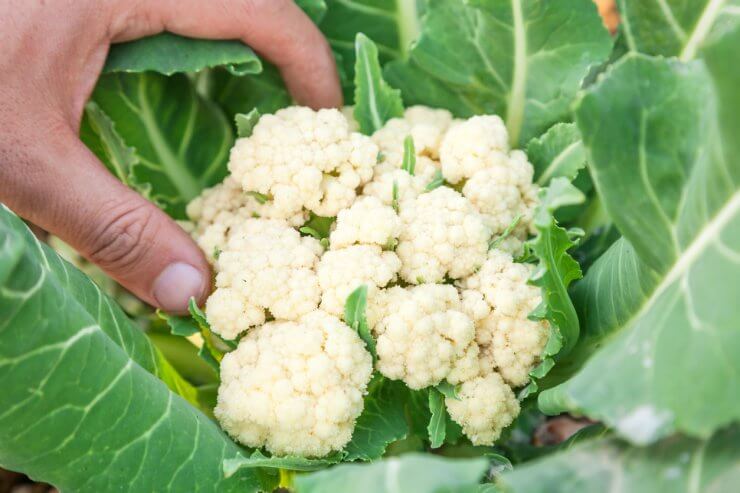 Sometimes the curds separate slightly and have leaves intruding into the head. This can be caused by a spike in temperature or waiting until maturity to harvest, which stimulates vegetative growth when there should only be reproductive growth. Use shade row covers in the event of a heatwave, plant varieties suited to your region, and harvest as recommended by the seed packet or starter instructions. 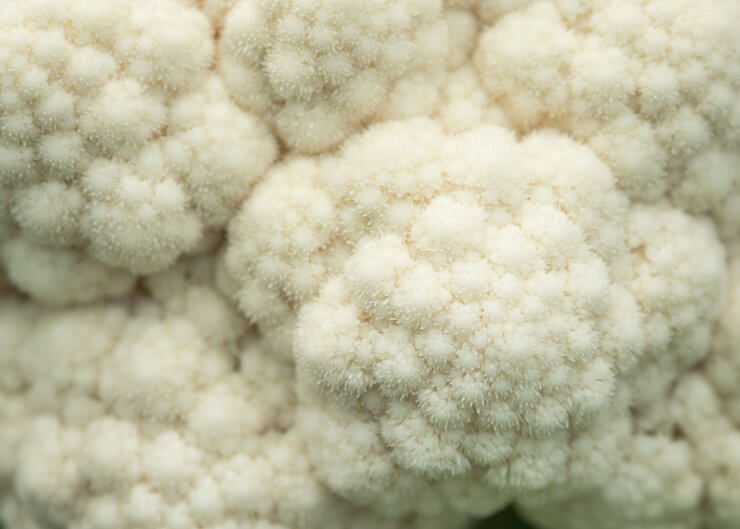 Ricing, a condition involving white fuzzy mold or a grainy cooked rice appearance, occurs when there’s too much humidity between plants, there’s a wet spell, there are temperature spikes, or the soil contains too much nitrogen (probably from over-fertilization).

Space plants properly and provide consistent watering to minimize growth spurts. Cut back on watering during wet spells, and grow varieties suitable to your region. 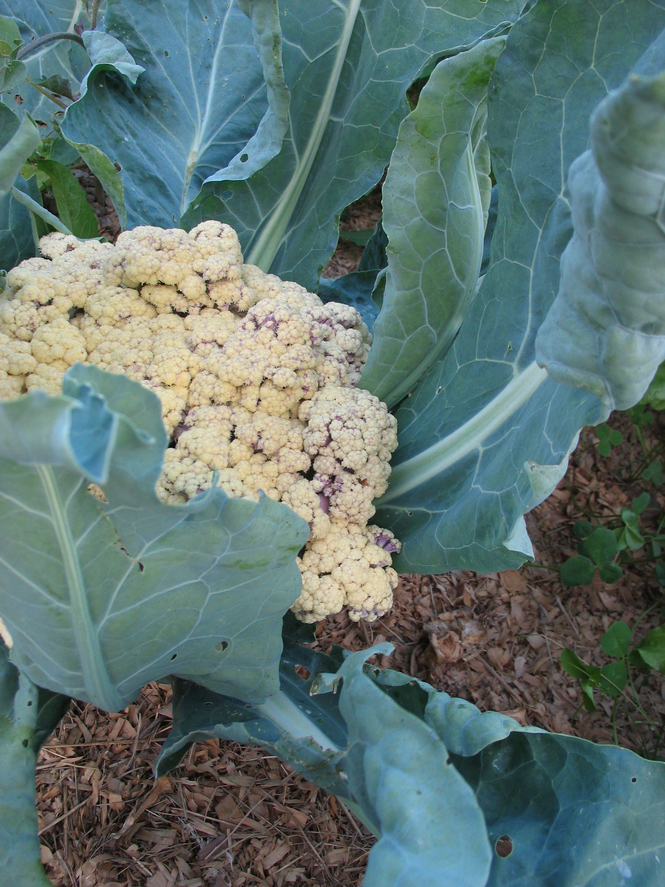 Whiptail in a cauliflower

This is a result of a nutrient deficiency that prevents the plant from forming a head. Leaves will be yellowish around the edges, whitish, or lack typical vein formation.

It can be caused by a lack of the micronutrient molybdenum or soil that’s too acidic, below a pH of 7 or so. Again, a soil test and remediation are your best friends.

In summary, you can prevent these problems by following best practices:

Have you experienced any of these cauliflower problems? Let us know how you dealt with them.