Planting Cilantro in the Ground 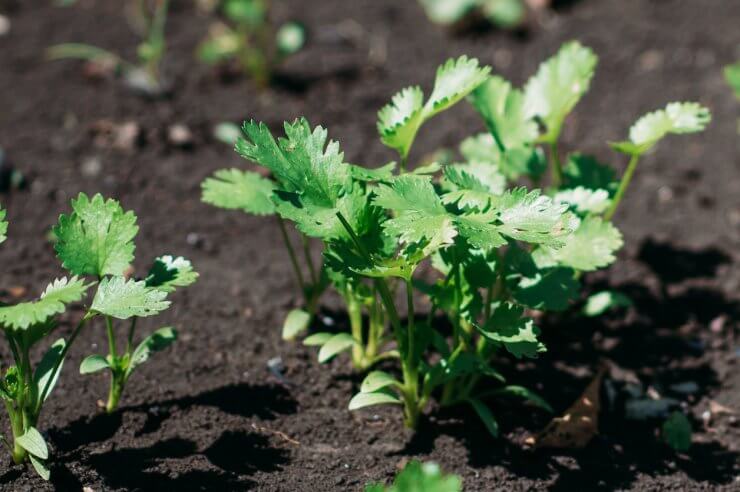 Cilantro growing in the ground in a garden

Cilantro plants need six to eight hours of sunshine in order to thrive. Cilantro is more heat sensitive than many other herbs, so it’s a good idea to plant it where it can receive partial shade during the day. It also needs well-drained, loamy soil with a pH of 6.2 to 6.8.

If you’re planting cilantro in open ground, till the soil adding organic material such as aged manure. If the soil is heavy, mix in some sand or shredded leaves to promote drainage. Cilantro likes moist soil, but it shouldn’t be soggy.

In general, space your mature seedlings about 6 inches apart with 12 inches between rows. Because cilantro grows quickly but also turns to seed quickly, if you want fresh cilantro leaves all season you should plant new plants or seeds every three to four weeks starting in late spring. So, plan your cilantro plot accordingly.

Cilantro also has a tendency to reseed itself. Some gardeners prefer to leave some room between cilantro and other plants to give the volunteers space to grow. Others like to plant cilantro among other plants, such as tomatoes and spinach, where cilantro’s flowers can attract beneficial insects.
Soil

Cilantro thrives on loamy, well-drained soil with a neutral to slightly acidic pH, 6.2 to 6.8. When planting cilantro in the garden, prepare your soil with organic matter such as manure or compost. Cilantro does not need much fertilizer, but you can add a little liquid fertilizer when your seedlings are about 2 inches high.

Cilantro does not need pruning per se, but you will encourage bushier plants if you pinch or snip off some of the top leaves from the main stem as soon as they appear to be developing flowers or seedpods. This will direct plant energy back into leaf production. 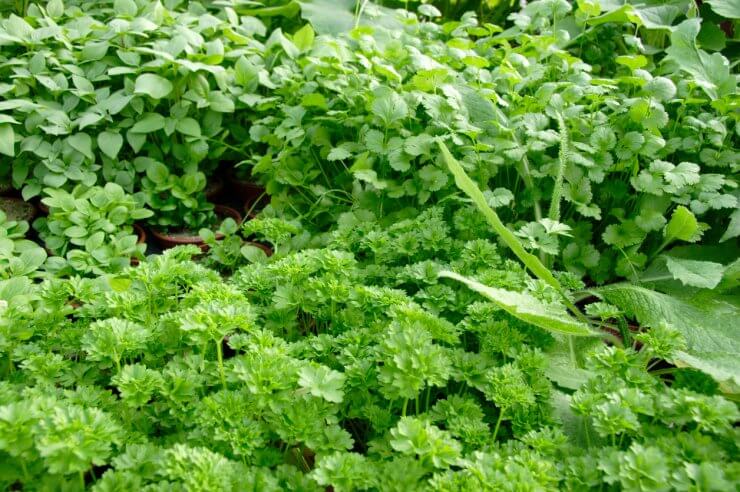 Cilantro is a friendly garden plant. Its delicate white and pink flowers attract beneficial insects that are not only beautiful, but protect your plants by eating pests. In turn, bushy plants such as tomatoes—or even tall flowers like cosmos and zinnia—can give cilantro the partial shade they need to thrive.

You could also consider planting a salsa garden; tomatoes, onions, jalapenos, and cilantro combine for a fresh, spicy treat.

Basil, mint, yarrow, dill, and tansy all work well with cilantro. But keep fennel and cilantro apart—in fact, fennel is best grown apart from most other plants. Aphids tend to pester cilantro, so plant sweet alyssum, coreopsis, and chervil, which all deter aphids, to minimize damage.

How do you plant your cilantro? What criteria for site selection has worked for you? Do you include companion plants with your cilantro? Please share your ideas with us.