How to Grow an Indoor Spice Garden 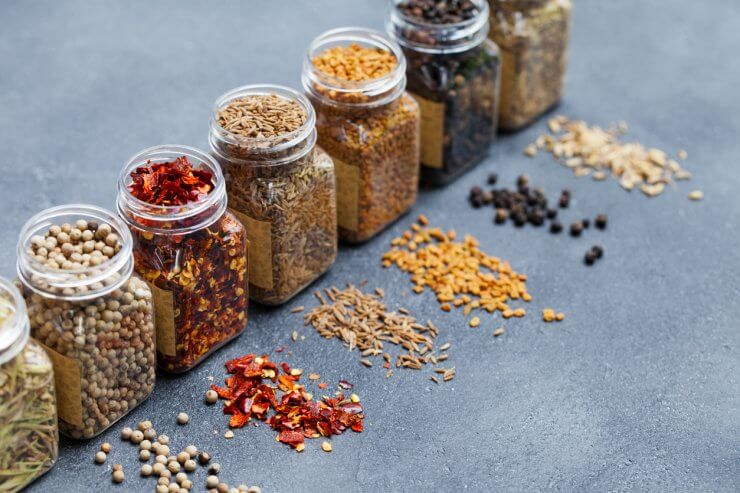 Herbs and spices. Spices and herbs. Anyone else grow up thinking these two words were interchangeable? ::sheepishly raises hand:: For some of you, I’m about to blow your mind. Herbs and spices are different things. In simplest terms, herbs are strictly the leaves of the plant and the spices come from the seeds, roots, and bark. This should settle the big debate on cilantro (leaves) and coriander (seeds) once and for all! Now that you’ve recovered from that bombshell, let’s talk about growing spices. Specifically, how to grow an indoor spice garden.

Unlike an indoor herb garden, indoor spices take a little more time and upkeep. With deep flavors and fresh spices at your fingertips, the effort is well worth it! Here are some spices you can plant in your indoor spice garden. 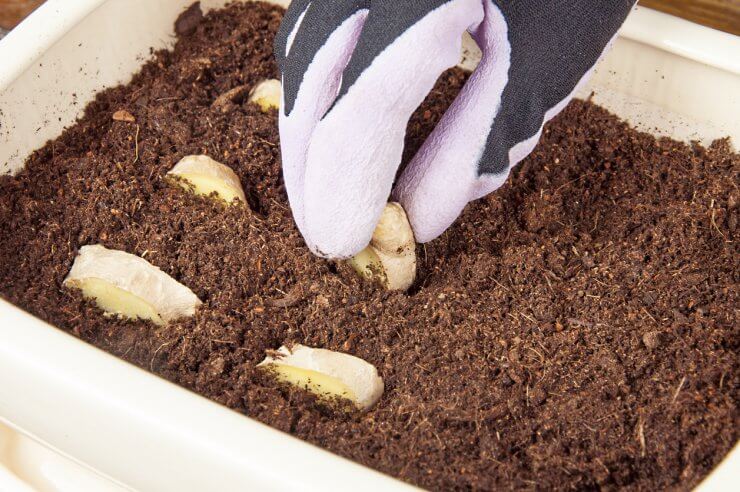 Ginger is featured in many recipes, especially Asian, Indian, and Morrocan-inspired dishes. You’ll be more successful by planting roots (more accurately, rhizomes) from a garden nursery or a cutting from someone else’s ginger plant, rather than a grocery store ginger rhizome. While not impossible, grocery store ginger may be too dry or have been exposed to other chemicals that can inhibit growth.

Ginger is a tropical plant so when growing indoors, it requires a little extra warmth in the form of a heat mat or lamp. Ginger plants need a wide container of at least 12 inches with room for the roots to spread. Coconut coir is a great medium to add for proper drainage. Soak your ginger rhizome overnight and then cut into sections making sure there is at least one eye per section. Plant sections in your container filled with potting soil. Cover each section of rhizome with another couple of inches of soil. The sections will sprout in three to eight weeks. You can start harvesting small pieces in about four months. 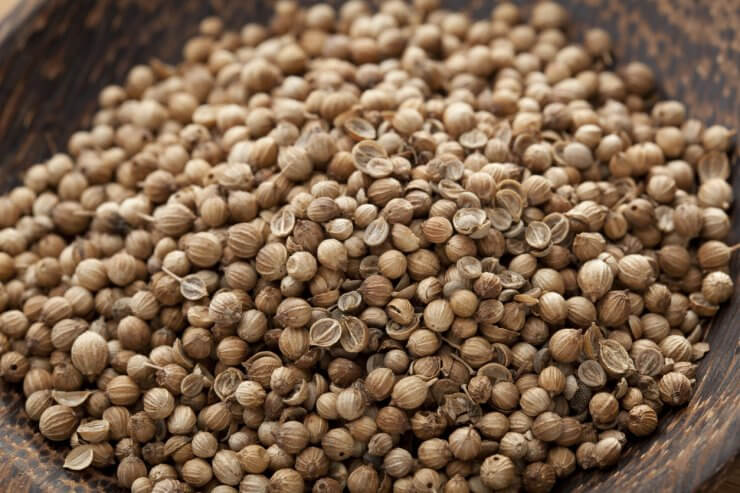 Coriander seeds come from the cilantro plant that can be grown indoors or in your outdoor kitchen garden. Growing cilantro/coriander is like getting two plants for the price of one since you can use the leaves in Mexican and Indian-inspired dishes and the coriander seeds in many Asian-inspired recipes. Cilantro also has great antimicrobial properties.

When you plant the coriander seeds in your indoor spice garden, you’ll see the cilantro sprout quickly and within a month you can begin to harvest the leaves and use the cilantro herbs. Once you stop harvesting the leaves, the plant will grow tall and the leaves will become smaller as the plant flowers. Green seed pods will form below the flowers. Let the stems and leaves dry out along with the seed pods until they are light brown in color. You can either pick the pods by hand or cut the stems and hang them upside down in a paper bag where the seeds will drop.  You can use coriander seeds in many Asian-inspired recipes. 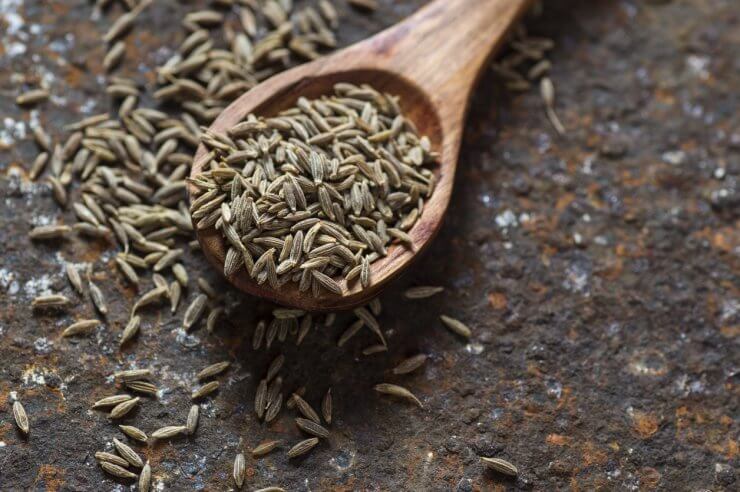 Cumin is the star of many Mexican, Morrocan, and Indian-inspired recipes. Growing cumin indoors will take a little while as their growing cycle is 120 days.

You’ll know when it’s time to harvest when the plant’s seed heads are visible but haven’t fallen yet. Cut the entire stem and let it dry upside down in a paper bag or some other container that can catch the seeds. If you’re keeping your cumin plant indoors full time, you’ll definitely need a grow light since these plants require full sun. 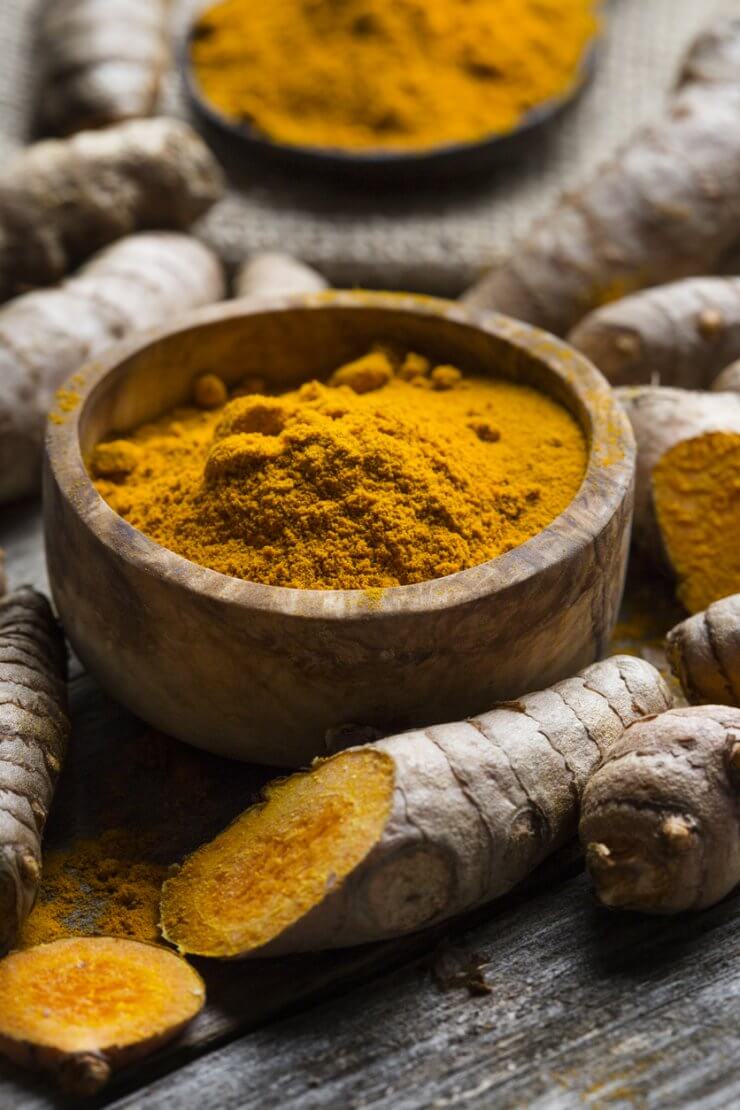 Turmeric, like ginger, comes from the root (rhizome) of the plant. Turmeric is featured in many Thai and Indian-inspired dishes. Like other spices, turmeric takes several months to mature and is usually ready for harvest at the ten-month mark. Just like ginger, you’ll get a better crop from a turmeric plant rhizome cutting from a nursery or online, but you can use a grocery store turmeric rhizome (often found in Asian cuisine or Indian cuisine specialty grocery stores).

Turmeric likes to have plenty of space to spread out, so get a pot or container that’s at least 14 inches wide. Similar to ginger, cut your rhizome into sections based on where the eyes (or nodes) are located. Plant using the same techniques as ginger. To sprout turmeric, place it in the warmest area in your house, or use a heat mat (85-95 degrees). Once sprouted the heat mat can lower to high 70s to low 80s. You may need to transplant to a larger container in a few months. Keep soil moist to the touch but not soggy and mist the leaves to reproduce a humid environment.

To make your own turmeric powder, harvest the turmeric rhizomes, cut the stems off, and boil for an hour. Drain the rhizomes and dry them in an electric food dehydrator or low oven until they become brittle and snap. Grind up the dehydrated turmeric using a spice mill or coffee grinder. 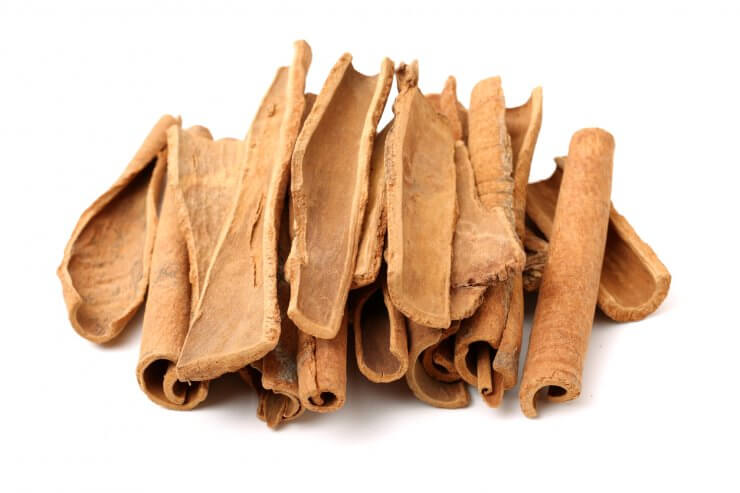 Cinnamon is a staple spice in Moroccan and Indian-inspired cuisines. Growing cinnamon requires playing the long game since you’ll have to wait at least two years before you can harvest the bark off of your cinnamon tree. You can successfully grow a cinnamon tree indoors if you have a very sunny location (12 hours a day) or are willing to use a grow lamp.

You’ll need a pot that is at least 24 inches wide and 20 inches deep. Cinnamon loves acidic soil so be sure to check the pH and adjust your soil as needed. I recommend planting a young tree from a nursery, but you can start a cinnamon tree from seeds. If you go that route, plant more seeds than you’ll need and thin out the plants as they grow so you can get the strongest plant from the bunch.

After two years or so, the bark will become dark and leaves will have a tough exterior. Cut about four or five stems off your tree using a downward 30 degree cut toward the trunk. Score the bark in four-inch segments and peel. Let the peeled bark dry for four or five days into cinnamon sticks. You’ll need to wait another two years before your next harvest otherwise you can deplete the tree. But a little cinnamon goes a long way. 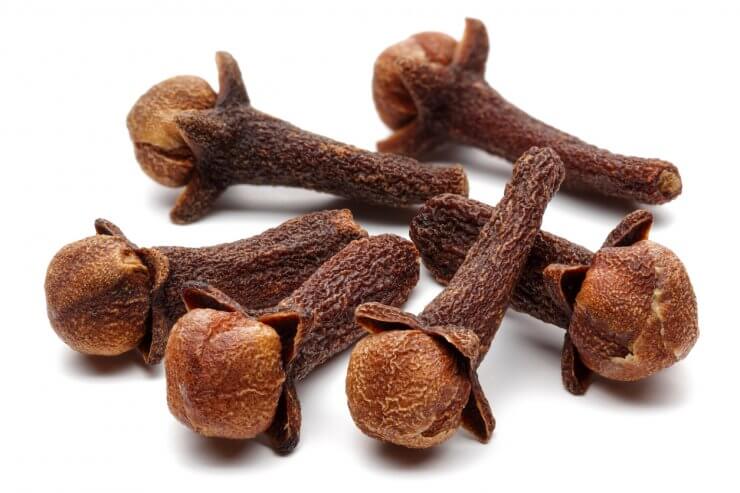 The aromatic clove spice is prominent in many Moroccan-inspired recipes. Clove trees require even more patience than the cinnamon tree and can take five to ten years to produce anything and upwards of 20 years for a full yield. The fragrant clove spice comes from the unopened flower bud of a clove tree. The unopened buds are harvested and dried in the sun.

If you’re ready for a commitment, add a clove tree to your indoor spice garden. Plant pollinated seeds in damp soil by placing the seeds on the surface. There’s no need to cover the seeds. Once the seedlings sprout to about an inch or so, transfer them into a larger pot. Years later, (like, actual years) when the buds are a reddish-brown hue, pick them before they fully mature (turn pink). Dry them in an airtight container until they turn dark brown and then use whole or ground up into a powder. 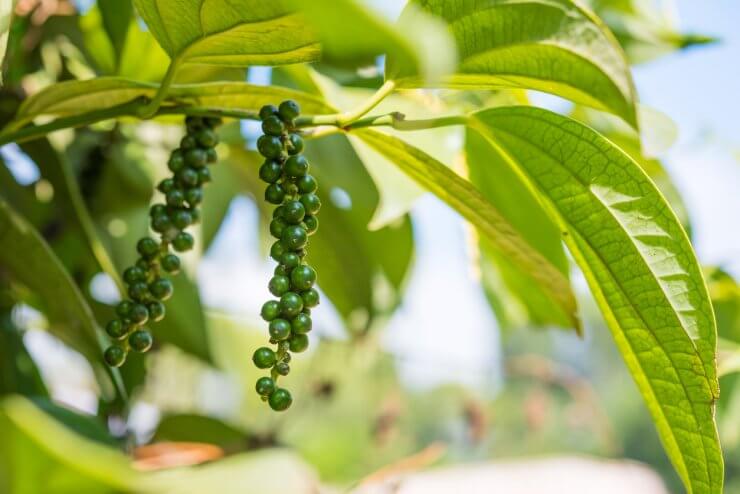 Used in nearly every style of cuisine, peppercorns are a workhorse spice that helps other flavors shine while providing a bit of heat. The pepper spice is grown as a flowering vine that fruits little peppercorns. Found naturally in tropical climates, peppercorn plants will need the help of heat mats and regular misting.

Depending on when the peppercorns are harvested, they can be black, white, red, or green. The pepper plant, piper nigrum takes three to four years to bloom. But after that, a mid-size plant will yield hundreds of peppercorns at a time, making it a great addition to your indoor spice garden.

These plants prefer a daytime temperature above 70 degrees so a heat mat is needed for most indoor growing environments. Occasional direct sunlight is okay, but more moderate light is best. Peppercorn plants don’t require large containers and will do fine in as little space as an eight-inch pot. Because this plant is a vine, adding a trellis or other climbing structure to the pot will be useful as it grows. Once the clusters of peppercorns begin to turn red, it’s time to harvest. Peppercorns can either dry by the sun or by using a food dehydrator.

Do you grow any spices indoors? What tips and tricks have you learned about your indoor spice garden? Let us know in the comments!