Why Do Onions Make You Cry? 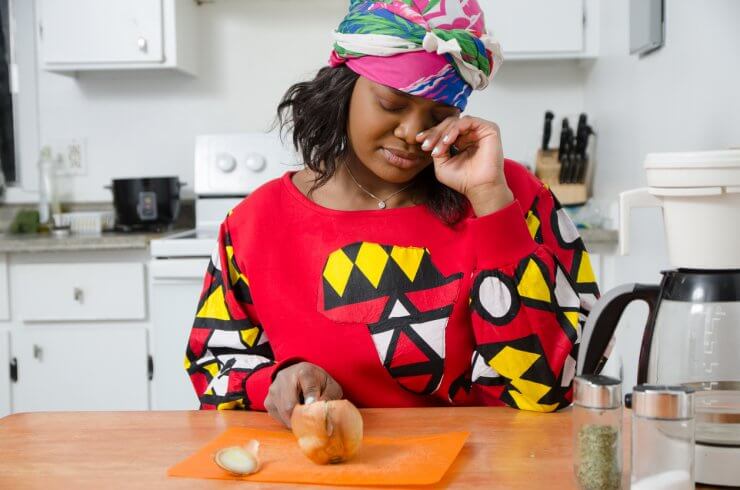 Some of us dread having to chop onions; the vapors coming off the onions can make our eyes water like crazy. But why?

As members of the Allium family, onions absorb sulfur from the ground; this helps the plants form molecules called amino acid sulfoxides. When you cut into an onion, the plant releases a compound called propanethiol S-oxide. This sulfur compound is very volatile, releasing a gas that irritates your eyes. Your eyes watering is just your body’s way of relieving the irritation.

Luckily, if you can get past the chopping/slicing/crying stage, onions don’t make you cry when you cook them—heat neutralizes the sulfoxide.

But can you do anything to stop the release of that irritating compound before blade touches bulb? You’ve probably tried a few techniques—running the onion under cold water; cutting the onion under water (awkward!); burning a candle nearby to burn off the sulfoxide; running your stove vent; chewing gum while you’re cutting; wearing swim goggles (awkward, but effective).

So what’s a cook to do? The secret lies in knowing one end of the onion from another. The cone shape at one end is the top of the onion; the button-like shape at the other end is the root end. It’s the root end that’s the root cause of your crying, so you need to remove it if you really would rather not have your eyes water while you’re cutting onions.

You need a sharp paring knife. Cut around the outside edge of the root end (about a half inch) at an angle to cut out a cone-shaped piece of the onion. Cut about one-third of the way up/into the onion, cutting all the way around until you can remove the cone. You should see a couple spikes making up the end of the cone—that’s the part of the onion that makes you cry. Toss that part into your compost bin or into the trash—but never into the garbage disposal! You could also decide to save the irritating part of the onion for last when you’re cutting.

With practice, you’ll get better at cutting out the bulb section. This may seem wasteful to some people; it depends on your tolerance to the sulfoxide. If it really bothers you to compost or throw out the bulb, you can put it into some potting soil. At the very least, you’ll get some onion greens from it; it could even form a new bulb! Experiment and see what works for you.

Did you already know the scientific reasons for what makes you cry when cutting onions? What methods do you use to stop onions from making you cry? Please share your experiences in the comments below.