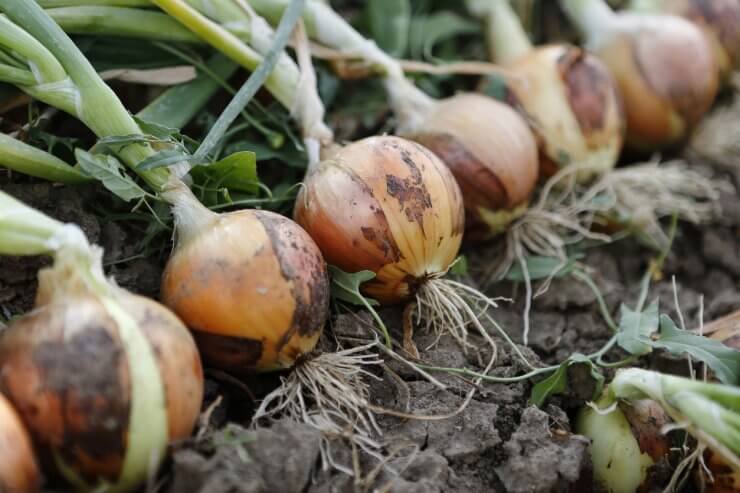 Onions. Sweet. Savory. Pungent. They make us cry (but they don’t have to). They garnish our burgers, put zing in our salads, and spice up our soups. We grill them. Fry them. Bake them. Chop, caramelize, slice, and dice them. We can even make ice cream with them!

Onions are the third largest vegetable crop grown in the United States, the second most consumed vegetable in the world, and the most widely traded raw vegetable on the planet. On average, Americans eat 20 pounds of onions a year! They’re No. 4 on the American fresh vegetable hit list, right behind potatoes, tomatoes, and sweet corn. Onions are easy to cook, easy to store—and easy to grow!

Onions are part of the genus Allium—which is part of the lily family. Allium cepa L., or the garden onion, is what’s known as a bulb onion. But these onion bulbs don’t grow fully underground; in fact, two thirds of an onion grows above the ground.

Bulb onions come in three basic colors: yellow, red, and white. Their flavor can range from sweet to tangy and pungent. Some store well for up to a year; others have a much shorter shelf life. There are two basic onion seasons: spring/summer and fall/winter. Their taste, texture, and general use will vary from color to color and from season to season. Whatever you’re cooking, there’s an onion to go with it!

This collection features nine popular onion varieties—plus two shallot varieties—giving you eleven total varieties that will provide some diversity in your harvest and help supply your kitchen with different onions for different recipes.

All onions fall into these scientific hierarchy classifications:

Shallots are also members of the Allium family. They’re layered like onions, but each shallot separates into two or three cloves, much like garlic does. The two most well-known varieties of shallots are the French shallot, Allium oschanini, and the Dutch shallot, Allium cepa var. aggregatum. Shallots have a pungent flavor when they’re raw; but when you cook them—ooh-la-la!—they are sweet, rich, melt-in-your-mouth delicious!

A Brief History of Onions 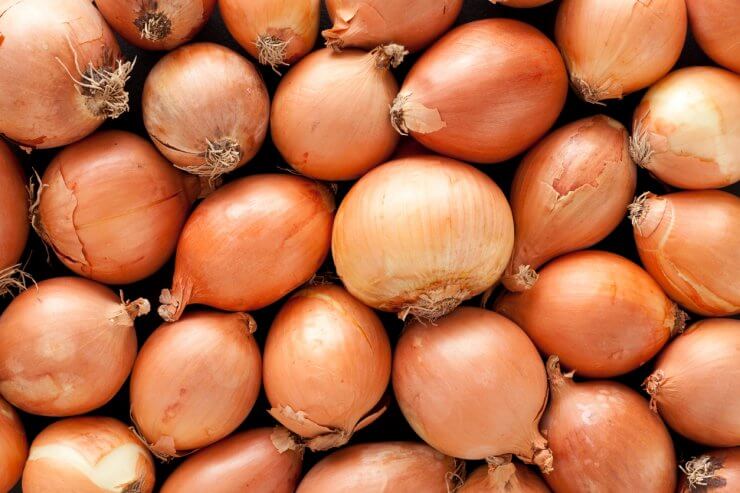 Onions have been with us for thousands of years; they sustained early hunter-gatherers by providing sustenance in a convenient portable package.

Onions may be one of the earliest cultivated crops because of their convenience: they were less perishable than other foods available to early humans, they were easy to grow and easy to carry, and they thrived in a variety of climates. Onions prevented thirst and, while early humans didn’t know it, provided lots of essential nutrients.

No one’s exactly sure how long humans have been cultivating onions, but their domestic history appears to reach back about 5,000 years. Researchers think they originated in Asia or in the Babylonian culture in what is now Iran and West Pakistan.

We love onions for their taste; the ancient Egyptians revered onions for their symbolism. These multi-layered orbs held circles in circles in circles—the Egyptians saw them as a symbol of eternity. In fact, archaeologists have found onions in ancient Egyptian tombs—real onions in the eye sockets of King Ramses IV, and paintings of onions on the inner walls of pyramids, depicted at banquets, ordinary meals, and as offerings to the gods. Onions also played an important role in the Egyptian mummification process.

It’s hard to know exactly how long humans have been cultivating onions; they don’t leave much of a trace behind—except in Pompeii. Pliny the Elder, author and naturalist, wrote about onions and the Romans’ beliefs about the vegetable’s ability to treat vision problems, induce sleep, and treat mouth sores, dog bites, and dysentery. The eruption of Mount Vesuvius buried Pliny the Elder and other residents of Pompeii. Centuries later, archaeologists discovered evidence of onions in Pompeii gardens.

Not everyone loved onions in ancient times. In India, orthodox Brahmins, Hindu widows, Buddhists, and Jains gave onions a wide berth and considered them forbidden vegetables because of their strong smell and reputation as an aphrodisiac.

Throughout history, onions have been a food staple for many cultures. Sailors learned that onions could ward off scurvy. In medieval times, onions featured heavily in people’s diets—they grew almost anywhere, had lots of flavor, and were easy to store over the winter. Onions were considered so valuable, some people used them to pay rent while others gave them to newlyweds as wedding gifts!

There are onion festivals all over the U.S. and even in Germany. One of the most popular is the Vidalia Onion Festival in Georgia. Have you ever been to an onion festival? Please tell us about the unique ways you celebrate onions!