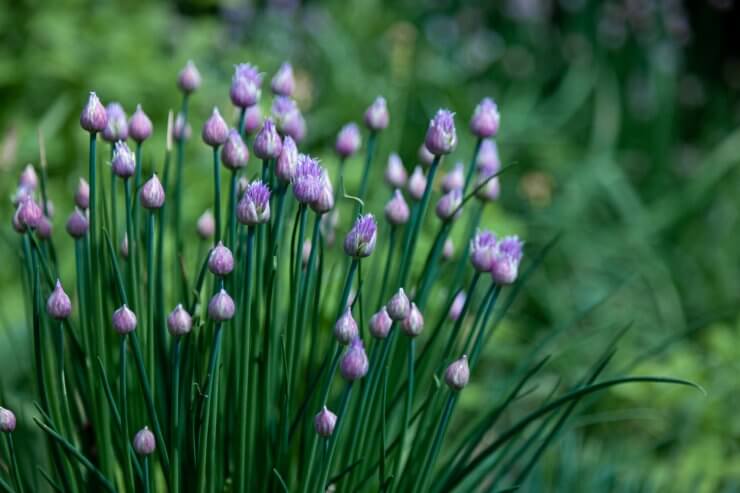 There are four main species of chives grown throughout the world:

Common chives and Garlic chives are what you are most likely to find growing in the U.S. Siberian chives are rarer, but sometimes available from specialty seed companies or at farmers’ markets.

All these species are classified as members of either the lily family (Amaryllidaceae), or the onion family (Alliaceae), depending on the precise method of classification and the botanists you consult. One thing everyone can agree on is that chives are part of the Allium genus that includes onions, which they most closely resemble. Botany, like many other branches of science, is not a static system. Research and discovery uncover new connections, and family plants are often rearranged.

Here’s an overview of the four types of chives:
Common chives (Allium shoenoprasum)
These are the chives with which we are most familiar. The plants have slender, hollow leaves and clusters of purple flowers. These chives tend to have a slight onion flavor.

Giant Siberian chives (Allium ledebourianum)
These chives have blue-green leaves, lavender ball-shaped flowers, and an onion flavor. They closely resemble Common chives, but grow much bigger: the leaves can grow to 24 inches and the flowers can stand as high as 3 feet. This species is not native to North America, but is sometimes available by special order.

Siberian garlic chives (Allium nutans)
Also called Blue chives, this species comes from western and central Siberia, and is taller than Garlic chives. It may have gotten “garlic” in its name because it has similarly flat leaves like Garlic chives, but it doesn’t taste particularly garlicky. Its flowers are rosy violet; they’re often grown for their ornamental value.

In general, you will find many more varieties of Common chives and Garlic chives available from seed companies and growers in North America.

Which type of chives have you grown? Do you have a preference? Please share your opinion.