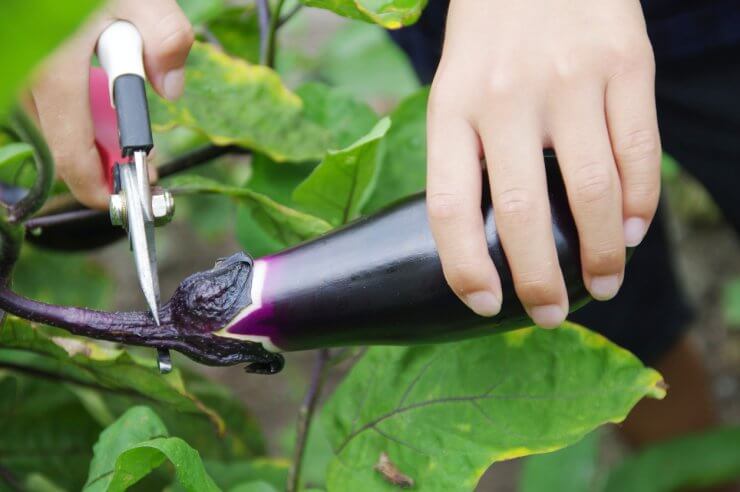 First things first: wear gloves because eggplant vines have spines and can cause mild allergic reactions in some people.

One of the fun things about eggplants is that most gardeners agree that you can never harvest them too early, because baby eggplants are tasty too! You can harvest as soon as they’re one to two-thirds of their expected full size.

Even though you might love the color they offer your garden, leaving them on the vine too long will make them bitter with thick skin and large seeds, very much how cucumbers react to being left on the vine.

You’ll know your eggplant is ripe when the skin is in color, glossy, and thin. Most importantly, the inside flesh will be white or cream colored. The fruit itself will be somewhat firm and the seeds will be barely visible. You’ll need to cut into the plant to check, but eventually you’ll know when eggplants are ready to be harvested without cutting into the fruit.

If the skin on your eggplant is dull, it’s likely over-matured. If the flesh inside is yellow, or has black seeds, it’s also over the hill.

To harvest your supple, colorful, glossy, thin-skinned eggplant babies, put your gloves on. Don’t pull, which will damage the plant. Instead, use a pair of bypass pruners to cut the eggplant stem about an inch above the cap. Treat the eggplant gently as you do this, because it can bruise easily.

The best part about harvesting eggplant is that the more you harvest, the more will grow!

What are your tips and tricks for harvesting eggplant? Is there a special technique or tool you use?