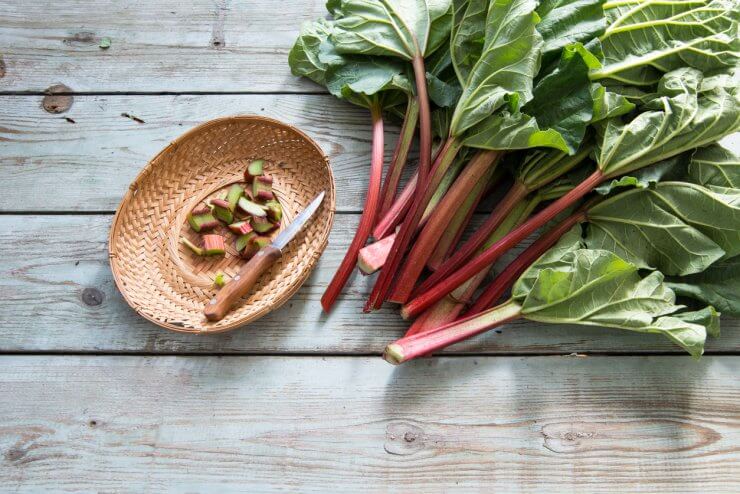 Rhubarb—fruit or vegetable? Well, rhubarb pie notwithstanding, rhubarb is actually a vegetable that we treat as a fruit—despite its usually sour disposition. It’s long been known as the pie plant, since that’s how it’s most commonly used.

Rhubarb is a hardy cool-weather perennial that will supply you with tart stalks for as long as 10 to 20 years or more! But you have to be patient; rhubarb needs time to mature and develop a hardy root system. So don’t plan to start harvesting from newly planted rhubarb plants until at least the second year after planting—and then, just sparsely. Starting in the third year, you can begin to harvest regularly.

Red rhubarb is not always the tastiest. In fact, Victorian rhubarb, considered by many gardeners to be the best rhubarb around, has stalks that are usually mostly green, not red. The color can vary depending on soil, water, and weather conditions.

The enormous, sprawling leaves of the rhubarb plant are pretty to look at—and poisonous to eat. They contain oxalic acid in amounts that can cause swelling, shortness of breath, and death. But you can go ahead and compost the leaves as you harvest the stalks; the leaves make fine compost, and the oxalic acid breaks down as the leaves decay.

Rhubarb is a member of the buckwheat family (Polygonaceae); the garden variety of rhubarb is Rheum rhabarbarum. Although it’s a perennial in USDA Plant Hardiness Zones 3 to 8, it is possible to grow rhubarb as an annual in zones 8 and up. You’ll only get one harvest, but those stalks will be tender. Remember: harvest rhubarb only for its stalks. The leaves are toxic to humans.

Rhubarb prefer loose, sandy, well-drained soil with a pH between 6.0 and 6.8, although most rhubarb growers will tell you that these plants are pretty flexible in the pH department. Not sure what your soil pH is? The best thing you can do for anything you plan to plant in your garden is to test your soil. You can do this yourself or contact your local extension center for guidelines on how to sample your soil and send it in for analysis. This is one step that many gardeners skip and regret later. So, don’t guess—get your soil tested! You—and your garden—will be glad you did.

A Brief History of Rhubarb 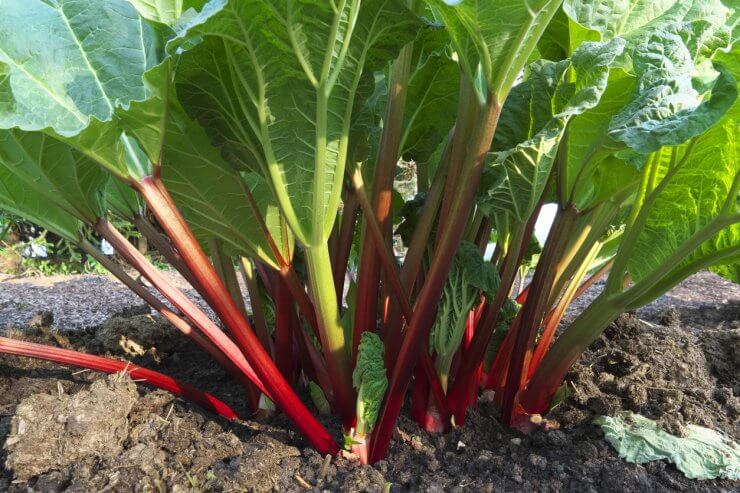 Rhubarb growing in the garden

Rhubarb’s roots go back as far as 5,000 years to Asia, where it was originally grown for its medicinal benefits of treating intestinal issues. Rhubarb root was used to treat constipation and inflammation.

The ancient Romans brought in rhubarb from parts unknown, beyond the river known as Rha—and that’s what the Romans first called it. The civilized Romans were acquiring rhubarb from people they considered barbarians, and so the plant became known as Rha barbarum, and later just rhabarbarum. And that’s how we got the name rhubarb.

The ancient Greeks knew about rhubarb’s power as a laxative, and wrote about it extensively. But much of what they wrote was destroyed by the invading Romans. Luckily, Arabic scholars had visited Athens before the Romans got there. Some manuscripts made their way back to Damascus and Baghdad, and their translations contributed to Arabic medicine between the ninth and 14th centuries.

From about 1600 to 1800, Russia held a monopoly on rhubarb. It was illegal to export rhubarb seeds, so Russia could control the rhubarb market. Russia had complete control on the dried rhubarb root market; Catherine the Great used proceeds from the sale of rhubarb root to fund her military campaigns in Finland, Poland, Ukraine, and Crimea. At one point, rhubarb seeds were worth more than their weight in gold!

James Mounsey had an adventurous life that took him from Edinburgh to London to St. Petersburg to France and eventually to Moscow. He was by this time a doctor, and the Russian Empress Elizabeth appointed him as First Royal Physician. She died, and when Peter III came to power, he kept Mounsey on—and even promoted him to the highest level in medical service in the Russian kingdom. Peter III did not reign for long; when he died in 1762, Catherine II, aka Catherine the Great, came to power.

Mounsey knew that when Russian rulers died, their close associates ran the risk of exile to Siberia. So Mounsey appealed to Catherine II to let him return to Scotland under the pretense of “ill health.” What Catherine didn’t know is that when Mounsey left, he smuggled out several pounds of rhubarb seeds with him. Gardeners in the UK can thank Mounsey and his daring escapade for the rhubarb that flourishes in home gardens there.

It would be the 1800s before rhubarb was commonly cultivated as a food in western Europe; Victoria rhubarb is named in honor of Queen Victoria, who ascended the English throne in 1837. We can thank Benjamin Franklin for introducing rhubarb to America as early as the 1770s, when he sent some rhubarb seeds to a friend in Philadelphia. And while rhubarb is technically a vegetable, in the 1940s American rhubarb growers successfully lobbied to have it classified as a fruit, which let them market it for higher profit.

In the world of theater and film, one time-tested way to create the overall sound of a crowd talking is to have people say rhubarb, watermelon, or soda water bottle over and over or in sequence, but all at different rates. The result is an active background noise that gives the impression of conversation. Try it at your next family gathering and see what it sounds like.

Did you know about the history of rhubarb? Are you excited to try growing it? Let us know what you think.