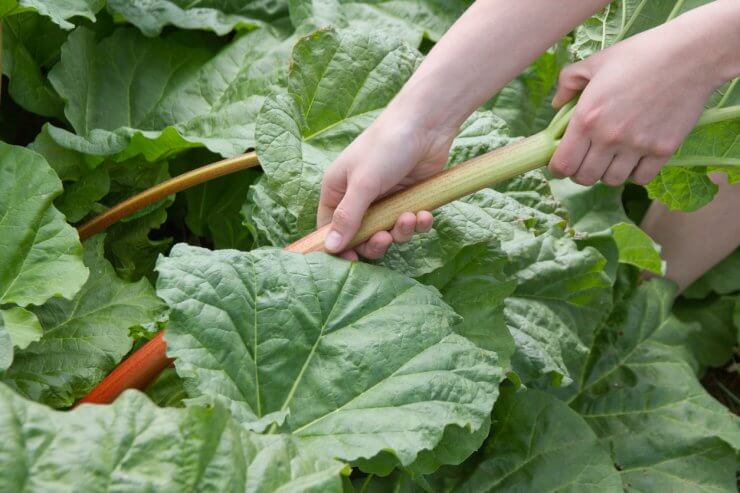 The rule of thumb for harvesting from your rhubarb plants is to take no more than a third of the stalks from any one plant at one time. You want to leave plenty of leaves on the plant; they’re feeding the root system, which needs to stay healthy and strong to survive the winter and be ready to push out new buds in the spring.

The best time to harvest is in the spring, before hot weather sets in. You’ll need to check the specifics on the variety you’re growing, but in general, once the stalks are a foot or more long, they’re ready to harvest. Some varieties produce stalks upwards of 2 feet long, so it will depend on the cultivar you’re growing.

Some gardeners like to be very fastidious in their harvesting methods; we all have a good set of garden shears or a sharp garden knife, don’t we? But harvesting rhubarb is no time to be neat. In fact, harvesting your rhubarb by slicing or cutting could open the plant to disease. Don’t leave open cuts on your plant.

To harvest your rhubarb stalks, grab the stalk near the root, hold it firmly, and twist it off as close to the root as possible. Harvest only three or four stalks from a plant at a time.

Before you take your rhubarb into the kitchen, get out your garden shears or sharp garden knife and trim off the base of the stalk and the big leaf at the top. Remember: Rhubarb leaves are toxic to humans and animals. Their high level of oxalic acid can cause a wealth of health problems. You can, however, toss the leaves on your compost pile. The leaves are still full of other nutrients, and the oxalic acid isn’t an issue for the soil.

Harvest season for rhubarb tends to last until the end of June. Once you hit that point, you should allow your plants to keep all their leaves so they can help the plant build up its reserves for the next growing season.

Can you pick a few stalks after June? Sure; just don’t overdo it. And when your rhubarb plants send up seed stalks, cut them off right away. You don’t want your plants wasting energy they could otherwise use to strengthen the plant for the next spring.

Store freshly cut rhubarb in a crisper drawer in the fridge. Use refrigerated rhubarb within a week. We discuss longer-term storage in Storing and Preserving Your Rhubarb.