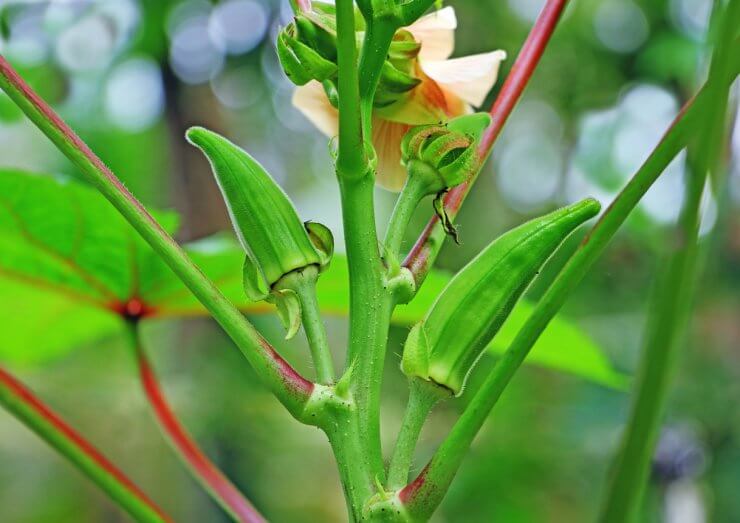 Okra is a frequent guest at the Southern dinner table; there’s something comforting and familiar about it; sometimes it’s called lady’s fingers because of its long, slender pods. It shows up cooked whole; as part of jambalaya; dried; pickled; grilled; roasted; and of course, in gumbo.

The word gumbo is the Bantu word for—you guessed it—okra. This delicious, versatile seed pod vegetable isn’t technically a vegetable at all, even though that’s the way we treat it. It’s the fruit of the plant—a pod packed with flavorful seeds that you don’t need to remove before eating. But you can use the seeds and press them for a rich oil that lends its flavor to homemade breads.

Okra is a warm-season crop, a member of the mallow family—which includes hibiscus and cotton. It’s easy to grow, versatile to cook with, and if you don’t manage to keep up with the harvest (it happens!), you can use the long, mature seed pods as decorations—and even for making paper and rope.

Technically, okra’s growth habit is considered to be that of a forb or herb—a shrub. Of course, if you’re thinking small shrub, think again. While some okra varieties top out at 2 to 3 feet, others can grow to 6 feet! Keep that in mind as you choose the okra that’s right for you. If you’re not especially tall and you’re not fond of ladders, look for a shorter variety. And you can be sure there are plenty to choose from.

There are dozens of species of okra. The pods are either red or green, and when you cook the red pods, they usually turn green (unless they turn purple). Here’s just a sampling of the varieties of okra available:

The variety you plant will depend on where you live. Okra is a warm season plant, and it likes warm soil. Okra likes heat and humidity. If that’s what your summers are like, okra may be a good fit for you and your garden. Technically, though, you can grow okra in all USDA hardiness zones—with a little planning.

We usually associate okra with Southern, Creole, or Cajun cooking; it grows well in the south, so it makes sense that much of the okra-focused cuisine would come from there, too. As people open up their palates to explore more foods, they will be pleasantly surprised to discover the versatility of the lovely little okra.

Okra is most popular in Africa, Greece, Turkey, the Middle East, India, the Caribbean, South America, and the Southern U.S. But you won’t have to travel far to get fresh okra—as long as you have (or can create) the right growing conditions: hot and humid.

A Brief History of Okra

A bounty of okra

Okra has apparently been around for thousands of years. While we can’t be exactly sure of its origin—countless generations of selective breeding have changed the plant—scientists think it originated somewhere in or near Ethiopia, where it had been growing for centuries. The tasty little seed pods made their way through Africa and the Middle East, where the seeds were toasted and ground and brewed like coffee. There’s evidence that the Egyptians were growing okra as long ago as 2,000 B.C.!

Okra eventually wound up in the Caribbean and the U.S., and then traveled eastward into Western Europe and made its way back to the Americas again. It’s been a long-time food staple in many southern states, but its popularity continues to grow because of how easy it is to grow and how fun it is to cook.

It used to be that outside the southern states, people considered okra good for no more than thickening soups and sauces. Well, times have changed, and people’s palates have, too. Okra could soon be a staple at your table.

Did you already know about the history of okra? Let us know any additional facts you know about okra by commenting below.