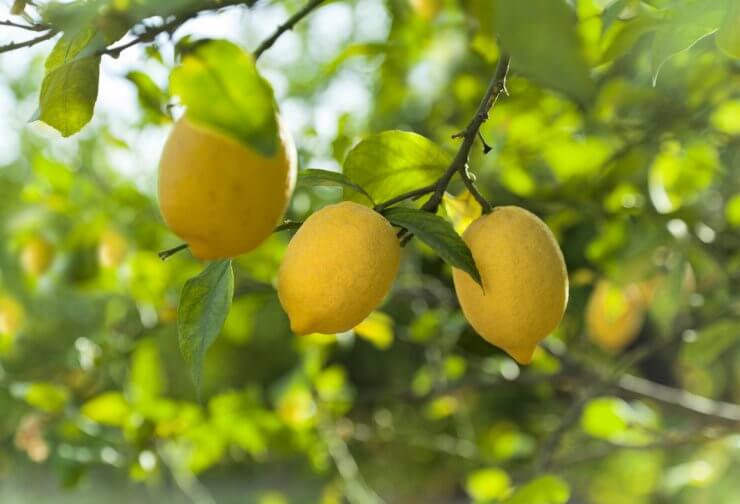 Beautiful lemons on a tree

Beautiful lemons on a tree

Ah, the lovely lemon. Tart, mouth-puckering, but oh-so-sweet in food and drink! It works as a garnish, as its own drink (lemonade and limoncello), and in soups, sauces, and desserts. This little fruit packs a lot of flavor and is incredibly versatile in the kitchen—and beyond.

Dip a slice of lemon in salt and use it to clean copper-bottom pots. Lemon peel oil shows up in furniture polish, detergent, soap, and shampoo. It’s also a key ingredient in the perfume industry. Lemon has been used as a medicinal treatment for centuries—as a laxative, as treatment for the common cold, and, of course, to prevent scurvy.

The lemon tree is an evergreen subtropical plant native to Asia. In addition to green leaves year-round, the lemon tree produces fragrant flowers, and it doesn’t require as much heat as other citrus varieties in order to produce ripe fruit.

The lemon, USDA botanical name Citrus x limon (L.) Burm. f. (pro. sp.) [medica x aurantifolia], is a member of the rue family. The lemon is part of the genus Citrus, which also includes lime, grapefruit, and—sometimes casually—kumquat, although the USDA has reclassified kumquat into its own genus (Fortunella Swingle).

You’ll hear discussion about “true lemon” trees versus other lemon trees. Trees considered to be true lemon are what you typically think of as a lemon—juicy, sour, and acidic, like what you find at the market. Eureka lemons and Lisbon lemons are considered true lemons, even though some botanists consider true lemons to be a hybrid species; the rest of those citrus called lemons are often hybridized with other citrus, but are still considered lemons.

Lemon plants have lovely white flowers with purple edges or undersides, and often have thorny branches. The aromatic fruit is oval, with a prominent nipple on the blossom end. While the skin of the fruit is usually yellow when it’s ripe, there are some varieties with variegated skin.

There are dozens of cultivars of lemon trees, although not all of them are available in the U.S. You’ll find lemon trees in countries with subtropical climates around the world, from the Americas to Australia to the Mediterranean, South Korea, Japan, and South Africa.

Lemon trees thrive planted in the ground in USDA Plant Hardiness Zones 8 to 11; they do quite well as container trees in zones 4 to 11—just bring them in before temperatures drop and make sure you place them in a warm, sunny, draft-free spot for the winter.

Lemon trees are self-fertile, which means you only need one to keep the lemons coming year after year. Keep in mind that the lemon tree’s flowers do need to be pollinated. If you keep your tree indoors year-round, you’ll have to facilitate pollination yourself—with a soft paintbrush, going from flower to flower.

California and Arizona produce the bulk of commercially available lemons in the U.S., with some production in Texas and Florida. If you live in one of those states, you’ll have to purchase your lemon tree from a local or regional nursery because of disease control regulations.

If you keep in mind that plenty of sunshine and not too much water are essential for your lemon trees, you’ll be well on your way to fresh lemonade and more!

The French Riviera is full of wondrous things—including the Menton Lemon Festival. The city of Menton has been famous for its lemons for centuries. In 1928, a hotel owner presented an exhibition of local lemons and flowers. The citrus theme took hold, as people built lavish decorations and displays decorated with lemons and oranges. Now, each year, the exhibition garden features lemon-and-orange-built structures up to 30 feet tall! Other highlights of the Menton Lemon Festival include the Garden of Lights, the Golden Fruit Parade, and, of course, delicious treats made with the world-famous Menton lemon!

A Brief History of Lemons 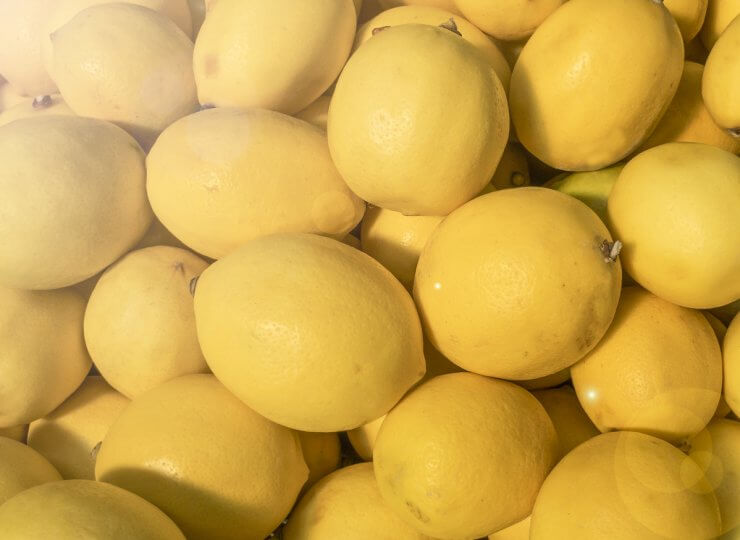 A bounty of lemons

Citrus trees have been with us for millions of years. A fossil leaf discovered in China dated back about eight million years! And in recent years, scientists have traced the DNA of citrus trees back to the same time and region—somewhere around northeast India or southwestern China the lemon developed.

We know from a decorated ceramic tile in the Roman city of Pompeii that citrus trees were common in the region before Mount Vesuvius erupted in 79 A.D. And the lemon tree shows up in official Italian records around the year 200. We don’t know the exact route that lemons took, but we know they were introduced throughout the Mediterranean and Middle East between 700 and 1100 A.D., eventually making their way to the Americas with Christopher Columbus in 1493 as seeds.

In 1747, James Lind experimented with sailors to see if he could help them avoid developing scurvy. Adding lemon juice to their diets helped keep scurvy away—even cured them if they had it. Let’s hear it for vitamin C! And even though the sailors were eventually dubbed “limeys” for their regular citrus intake, they were actually using lemons. It’s said that incorporating lemon juice into British sailors’ diets helped change history—giving the British navy enough sailors to defeat Napoleon. To this day, the lemon tree is the symbol of the British Institute of Naval Medicine.

By the 19th century, lemons were regularly cultivated in Florida and California—still two of the best states for growing this citrus fruit. California is the lemon-producing leader of the states growing lemons, which also include Florida, Texas, and Arizona. Florida’s lemon industry has taken several hits since the 1880s because of freezes, but it keeps bouncing back.

For many years growers have been working to develop new varieties of lemon that are cold-hardy below freezing. Some do pretty well withstanding low temperatures—but to be on the safe side, you’ll definitely want to bring your lemon trees inside before a cold snap. They’ll be much happier.

Did you know about the history of lemons? Are you excited to try growing them? Let us know what you think.