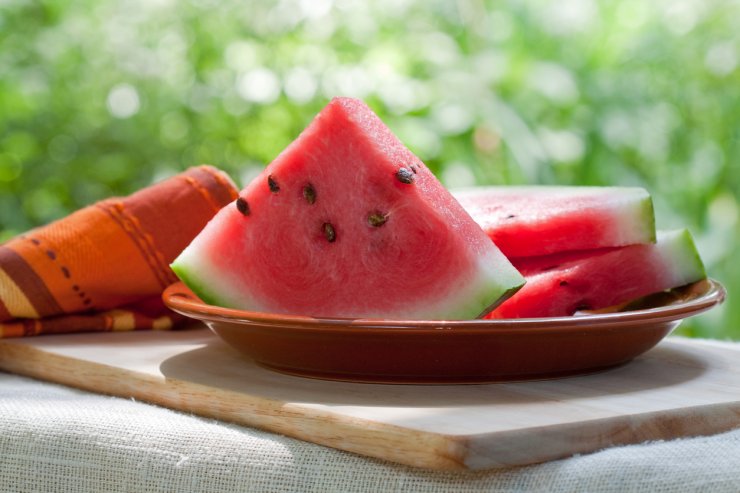 Is there any food that says “summer” more famously than watermelon? No one can think of sweet, juicy watermelon without conjuring up fond summer memories—picnics, supper on the porch, camping out, all with slices of watermelon at the ready as a handheld dessert.

And plenty of seeds for spitting, too, if you’re of a certain age!

Watermelon’s scientific name is Citrullus lanatus, and as a member of the Cucurbitaceae family, it’s related to cucumbers, squash, and pumpkins. Numbers wise, there are more than 1,200 varieties. China leads the 96 countries of the world where it’s produced, growing about two-thirds of the global supply, and the United States places seventh.

However, it was in Japan where cube-shaped watermelons were invented, grown in glass cubes intended to make stacking and shipping easier. As charming as these are to look at, you won’t often find them in your average market, as they now command a premium price mostly suited to high-end urban supermarkets.

In both China and Japan, by the way, watermelon is considered a thoughtful gift to bring to a host!

Above all, of course, watermelon is outstanding for its high content of water: 92%. No wonder it’s so refreshing on a hot summer day!

A Brief History of Watermelon

Watermelon originated in West Africa, where it still grows wild. There is hieroglyphic and seed evidence from places such as Pharaoh Tutankhamun’s tomb showing that it was grown and enjoyed in Egypt as long as 5,000 years ago. It was placed in burial tombs to nourish the soul of the departed.

Watermelon spread as a crop throughout the Mediterranean region, and was introduced into Europe by the Moors in the 10th through 13th centuries. From there it was spread to the New World by slaves and European colonists. It is essentially grown everywhere the climate is conducive to it.

Watermelon has been crossbred only, with no genetic modification required, to create the many varieties available today, including the ever-popular seedless type. You can grow everything from mini “personal” watermelons to those weighing in at hundreds of pounds. The Guinness Book of World Records lists the largest ever at 350.5 pounds, grown in Tennessee in 2015!

While most people simply cut open a watermelon and enjoy in slices—the world’s easiest dessert—there are hundreds of different things you can do with it, including the rind! Try out our easy Recipes for salads, juices, and more. You’ll never look at watermelon the same way again.

Pro tip: You should always wash your watermelon before slicing in, despite its hard rind. You don’t know what’s on that rind that you could be carrying to the flesh with your knife. And be sure to wash your hands before handling it!

Did you know that watermelon originated in West Africa? And have you ever seen Japanese-originated cube-shaped watermelons? Do you know any cool facts about watermelons? Please tell us what you know by commenting below.