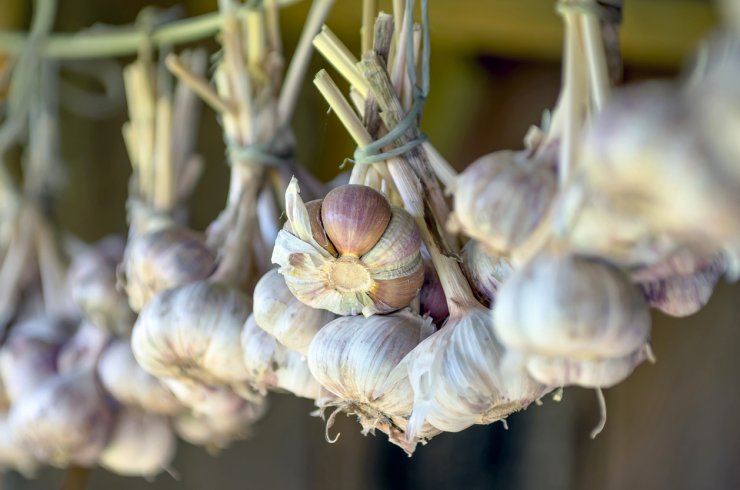 Garlic is a staple in cooking throughout the world. In Asia, thought to be the birthplace of garlic, it’s still used heavily in almost all cuisines. Most Middle Eastern and European cooks use it daily and it’s definitely a mainstay in Chinese cuisine. Although sparingly used in northern Italy, garlic is an important ingredient in many of the southern regions of the country.

In Mexico and South America, garlic appears as a side dish (roasted), an ingredient, and pickled as a garnish. North American cooks consider garlic as a pantry staple that’s used—raw and cooked—in a huge variety of dishes.

There are even festivals dedicated to the wonders of garlic. Founded in 1979, the Gilroy Garlic Festival takes place annually in Gilroy, California, where garlic is celebrated by chefs, artists, performers, and festivalgoers from all over the world. Over four thousand volunteers come together to host the three-day festival, which draws several thousand guests each summer. All the garlic used in the festival is grown in California.

If you love garlic, the Gilroy Garlic Festival is a must-attend event; there’s garlicky fun for the entire family!

Garlic’s longevity is a testament to its versatility, easy cultivation, and of course its delicious flavor. It is thought to be descended from a wild strain of Asian garlic, Allium longicuspis, but its origins have never been proven.

One of the planet’s earliest cultivated crops, garlic is believed to have been brought from Asia to the Middle East, Northern Africa, and Europe, eventually crossing the Atlantic with Spanish, French, and Portuguese settlers.

Garlic has been around since the beginning of recorded history and was found in the artwork and writings of ancient Egypt, Greece, Babylonia, and China. It’s even referred to in the Bible: “We remember the fish we ate in Egypt that cost nothing, the cucumbers, the melons, the leeks, the onions, and the garlic.” (Numbers 11:5.) Garlic appears in ancient medical texts; Hippocrates, an ancient Greek physician, prescribed garlic to treat a variety of conditions.

A functional food, garlic has been used for centuries in the prevention and treatment of diseases and in home remedies for everything from toothaches to arthritis. Some people even think it will protect them from vampires!

It’s interesting to note that many early civilizations without any contact with each other used garlic in similar methods, both in cuisine and to promote health. And we are still using it in many of the same ways today.

Did you already know all of this history about garlic? Have you ever attended the annual Garlic Festival in Gilroy, California? Please tell us about the unique ways you celebrate garlic!