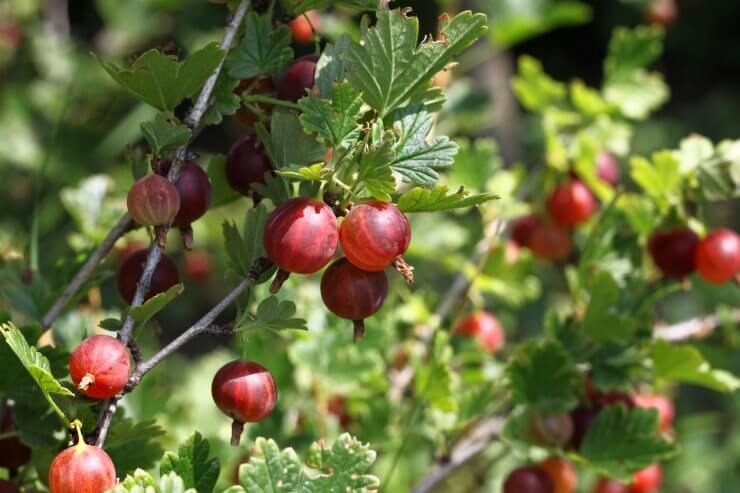 Ripe red gooseberries in the summer

You may also come across jostaberries, which are a cross between currants and gooseberries. They’re almost black when they’re ripe, and are a good candidate for making fresh juice, as well as pies and preserves.

Virtually all gooseberry shrubs cultivated in the U.S. are mildew-resistant, and most of them are resistant to white pine blister rust. The fungus that causes white pine blister rust isn’t a real problem for gooseberries; it’s when they pass it on to white pines or other five-needle pine trees that the damage is done. In the early 1900s, gooseberries were banned in the U.S. because of the risk they posed to the lumber industry. Even today, there are states that have banned this plant altogether; in some other states, you need a special permit to grow gooseberries. So, before you start planning which cultivar you want to grow, check with your local extension center to see if it’s a possibility.

If you’re in the clear to plant gooseberry bushes (or shrubs, if you like), you’ll have lots of choices. Growers have developed a wide variety of cultivars with flavors ranging from sweet/tart to sweet, and in colors ranging from pale white to deepest purple. Here’s a sampling of some of the varieties available which have good or better resistance to powdery mildew—a common ailment of gooseberries, and the fungus that causes white pine blister rust (ripe berry colors in parentheses):

All gooseberry bushes require a certain number of chill hours—that’s the number of hours that the temperature is below 45 degrees F during the winter so it can grow successfully in the spring. In general, gooseberry bushes need at least 1,000 chill hours over the winter; that’s 42 days. They don’t have to be consecutive, but the hours need to add up.

One caveat about planting gooseberries: the fresh green leaves of the plant contain small amounts of hydrogen cyanide, which can be fatal to humans, pets, birds, livestock, or wildlife that eat the green leaves. Now, granted, you would have to eat a lot of gooseberry leaves to get sick. It’s not concentrated like you see in crime thrillers, where the victim perishes in a matter of minutes. But there are reports of chickens and other livestock falling ill from eating the leaves. In its natural form—in gooseberries, apple seeds, almonds and other plants—hydrogen cyanide protects the plants from nibbling herbivores. The bitter taste is usually enough to send foragers looking for something else to eat.

Which type of gooseberries have you grown? Do you have a preference? Please share your opinion.