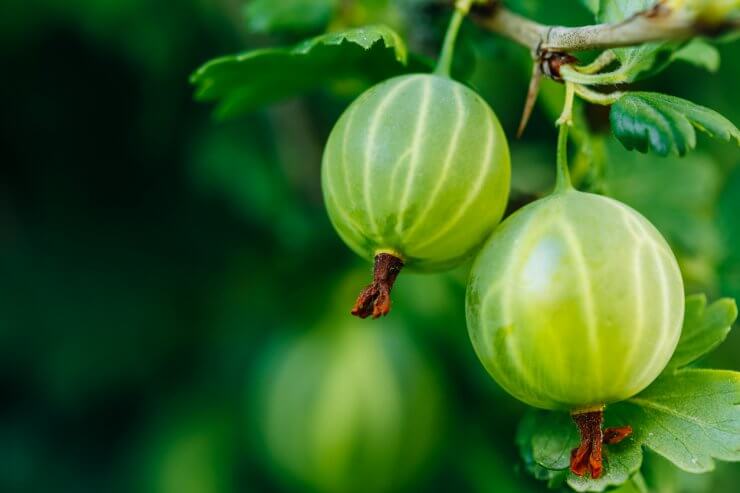 Gooseberries. They hang like little round jewels from the stems of the usually-thorny bush. Ranging in size from a plump blueberry to a medium-size plum, gooseberries are making a comeback in the United States. Once considered a cultivation pariah in North America, new disease-resistant cultivars are making it possible for home food gardeners to enjoy this juicy fruit.

Gooseberries are shrub-like, growing canes that can be pruned to grow along a wall or trellis. Most varieties sport sharp spines that deter most mammals from munching on the growing berries—although birds are quite adept at swooping in to grab a few berries for lunch. Keep your netting handy!

Don’t let the prospect of a spiny shrub bearing berries deter you from growing these; all you need are gloves, long sleeves, and to proceed with caution when picking or pruning. It will be worth the effort!

The flavor of gooseberries ranges from sweet/tart to sweet. The berries are most commonly baked in pies or made into preserves. The sweeter varieties are delicious eaten fresh. You can dry them, juice them, freeze them, or puree them.

Gooseberries are more popular and more common in Europe than in the U.S. And in Europe, they take their gooseberry growing quite seriously. The Egton Bridge Old Gooseberry Show—the oldest such in the world—has been holding competitions since 1800. In 2019, a Yellow Millennium Gooseberry grown by Graeme Watson made it into the Guinness Book of World Records with a whopping weight of 64.83 grams—about 2.2 ounces. That’s pretty big for a gooseberry!

In the U.S., the folks in Trenton, Missouri celebrate all things gooseberry with their Gooseberry Festival. It’s an annual weekend affair, including a cooking contest where contestants can show off their skill at making gooseberry pies, jams, jellies, and more; an art show; and road races and other sports competitions—even an atlatl and archery tournament (an atlatl is a prehistoric tool used to throw spears and arrows great distances).

Folks in Watseka, Illinois also hold an annual Gooseberry Festival in the summer. There are plenty of gooseberry pies to sample and buy while you’re there.

A Brief History of Gooseberries 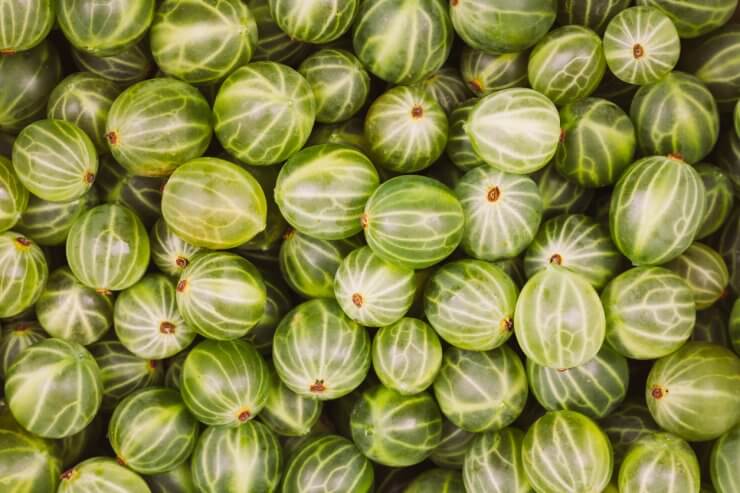 Gooseberries are native to the Northern Hemisphere and can grow almost as far north as the Arctic Circle. The European variety developed in northwestern Africa and southwestern Asia and has been cultivated in the U.K. since the 15th century. Their North American counterpart has been growing on the continent for hundreds of years.

Early settlers brought the European gooseberries with them, and eventually hybridized them with native North American species. The very first North American hybrid, Houghton, made its first appearance at the 1847 meeting of the Massachusetts Horticultural Society.

In the early 1900s, growers realized the relationship between gooseberry bushes and white pine trees. The lumber industry, as you might imagine, was quite alarmed at this and tried to eradicate gooseberries in their harvesting areas. A federal ban on gooseberry plants went into effect, and remained until 1966, when the responsibility of restrictions shifted from the federal to the state level.

There are still states that forbid the import or growing of gooseberry plants—even having them in your possession can be illegal. For instance, gooseberry growing is banned in most of Maine, where white pine is a central part of the state’s economy. In Massachusetts, there’s a list of communities where there’s an outright ban; for communities not on that list, you usually have to get a permit to grow gooseberries.

Bottom line: before you pick out a spot for your gooseberry bushes, check with your local extension office to find out if gooseberries are welcome in your neighborhood.

Did you know about the history of gooseberries? Are you excited to try growing them? Let us know what you think.