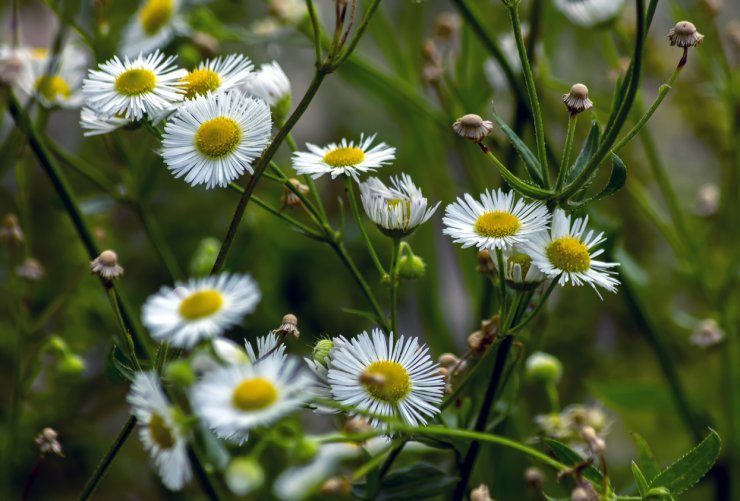 The chamomile plants we commonly use for tea and other herbal uses come in basically two varieties. Actually, they’re two different species in the daisy family. Chamomile is classified as a forb/herb; for gardening and culinary purposes, we’ll stick with herb.

Roman chamomile is a perennial. It grows 3 to 6 inches tall (sometimes up to a foot tall) and it spreads out to form a mat of foliage. Gardeners beware: Roman chamomile does tend to creep and spread, so keep an eye on it. It’s not as enthusiastic as, say, mint—but it does like to spread out and get comfortable.

If you’re not sure you want to make chamomile a permanent part of your garden (or a spreading, persistent part of your yard), consider planting your chamomile in a container. You can also plant it in an area with barrier borders, like a patch of soil between your driveway and sidewalk or a circle of bricks or rocks.

Roman chamomile’s tendency to spread out is appealing for people who would like a little foliage between paver stones. In England, some people plant it as an alternative to grass: it doesn’t grow very high, and you can mow it like you would grass—but not nearly as often. Of course, you’ll want to pick the flowers first.

German chamomile produces a lot more flowers in a season than Roman chamomile and is the more common source of chamomile tea. German chamomile has fern-like foliage with flowers that grow up to 2 feet high. While it’s native to Europe and Asia, it’s grown commercially around the world, and it’s a favorite of home gardeners.

Some say German chamomile tends to be slightly sweeter than Roman chamomile; others say just the opposite. Maybe you’ll plant both and conduct your own taste test—just be sure to let us know how it turns out!

German chamomile is an annual that self-seeds—as long as you leave some flowers on the plants. So, at the end of the season, don’t harvest your flowers completely. The remaining flowers will drop their tiny seeds, and you’ll have new plants in the next growing season.

The flowers on German chamomile are fairly tiny—just over an inch across. But what they lack in size, they more than make up for in profusion; German chamomile plants produce prodigious piles of flowers.

German Chamomile grows well in poor soil, and while it thrives in open, sunny locations, it won’t complain if there’s a bit of shade during the day. Both the leaves and flowers are edible. In fact, you can brew yourself a hot cup of chamomile tea using fresh flowers. Drying them gives you a ready supply for the future; but during harvest time, try using the flowers fresh!

There are other varieties of chamomile throughout the world, but the Roman and German varieties are the one most commonly grown in the U.S. For the ultimate chamomile tea experience, tea connoisseurs recommend Egyptian chamomile, which is actually a variety of German chamomile. The secret to Egyptian chamomile’s flavor is the soil it grows in, in the lush valley along the Nile; nothing in the world tastes quite like chamomile grown in Egypt.

M. discoidea, sometimes called pineapple weed, is a close relative of German chamomile. Pineapple weed has a distinct characteristic that will help you spot it in the wild: the golden flowers have centers, but no petals. When you crush the flowers, they smell like pineapple.

There’s another variety of chamomile that at first glance may look like pineapple weed—until you smell it. It’s called stinknet chamomile. It’s not quite considered a weed, but it’s definitely not something you want to plant if you’re looking for fresh tea.

Other varieties of chamomile, such as corn chamomile, golden chamomile, and tall chamomile, are a different species. Other than golden chamomile, which is sometimes blended with other herbs for tea, these chamomiles are often considered weeds. So, keep in mind that even if a plant is commonly called chamomile, it may not necessarily be the plant that’s good for making tea.

Some varieties of chamomile are toxic to dogs and can be dangerous for cats: varieties include Roman chamomile, Manzanilla, Corn Feverfew, Barnyard Daisy, Stinking Chamomile, and Turkey-weed. Check with your veterinarian if you have concerns about plants that may be hazardous to your pet’s health.

Do you grow different varieties of chamomile? Which ones do you grow? Do you make tea? Potpourri? Please tell us how you use your chamomile harvest.