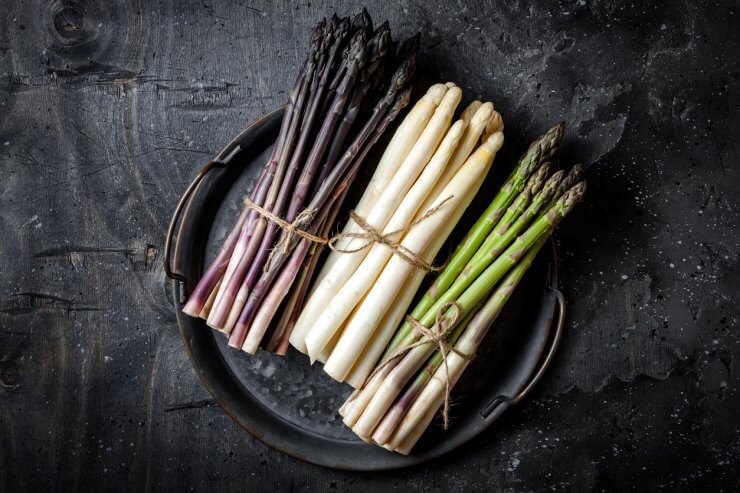 Green asparagus is by far the most popular type of asparagus plant and it grows almost anywhere. It is characterized by bright green stalks with pointed tips that are often purple. A bit grassy in flavor, green asparagus is considered the most nutritious type and has the most fiber. Popular green asparagus varieties include Jersey Giant, Apollo, and Mary Washington.

Purple asparagus was developed in Italy and is relatively rare in the U.S. It gets its color from high levels of anthocyanins, which are high in antioxidants. Purple asparagus is somewhat nuttier and sweeter than green asparagus because it has about 20% more sugar. Despite its ‘royal’ skin, purple asparagus is green or white inside the stalk and will turn green when cooked. To enjoy its original color on your plate, eat it raw or lightly steamed. Popular purple asparagus varieties include Purple Passion and Pacific Purple.

Heirloom and hybrid varieties of asparagus each have different advantages. Heirlooms are old-time varieties, open-pollinated, and saved and handed down through multiple generations of families. Usually, they cost less than hybrid seeds. Many gardeners believe the fruits of heirloom plants taste better. Hybrids, on the other hand, are created by crossing two selected varieties, sometimes resulting in vigorous plants that yield more than heirlooms. Many hybrid varieties have also been developed to resist pests and diseases that can affect the plants and make them hardier in adverse climate or growing conditions.

Asparagus plants come in male or female types. Because the females use energy to produce seeds, they generally yield a smaller crop. Most gardeners, therefore, prefer male plants, and some varieties have been hybridized to produce only male plants.

Different types of asparagus plants have slightly different flavors and textures. Green asparagus—the most common—has a slightly grassy flavor with a high degree of fiber and superior nutrition. Its flavor and texture goes well with butter, lemon, eggs, salads, and most seafood, poultry, and meats. White asparagus tends to be more fibrous, with woody stems that should be trimmed before cooking. Because of its density, white asparagus takes longer to cook than other types and lends itself to grilling. It is most often served whole with melted butter or hollandaise sauce. Purple asparagus has a sweet, nutty flavor owing to the higher amount of sugar in it than other varieties. This type will turn green when cooked, so it’s best served raw in salads or lightly steamed to preserve its unusual color.

To grow white asparagus, gardeners have to keep it in the dark, so it doesn’t photosynthesize. Typically, the plant is covered with dirt or a black tarp as it grows. This added step means more work for the gardener, but lovers of white asparagus say it’s worth it!

Have you tried growing different types of asparagus? Which do you prefer? Please share your opinion in the comment section below.