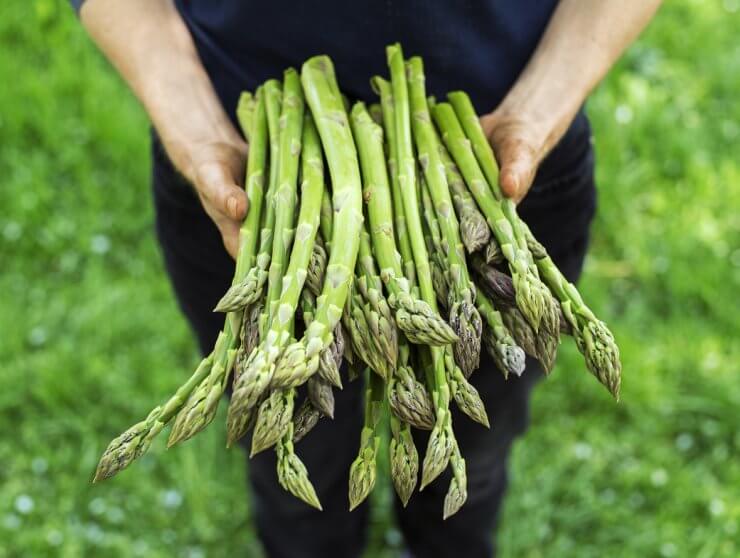 A beautiful fresh harvest of asparagus

If you’ve ever been tempted to pick up a stalk of cooked asparagus with your fingers and bite into its crisp, delicious flesh—you’re in good company! Asparagus is considered a finger food—so long as it’s not covered in sauce—in England and many other countries. With its bright green (or white—or even purple) stems and flavor like no other garden vegetable, asparagus is a welcome sign of spring. Asparagus goes so well with other foods and it doesn’t need anything to improve it—though a little lemon juice and butter is always welcome to enhance the flavor. That’s why it’s so satisfying to grow your own asparagus. With very little effort, you can have hundreds of fresh asparagus all spring and even into the summer.

Botanically speaking, asparagus (Asparagus officinalis) is an herbaceous perennial with feather foliage, related to the lily. Plants are male or female, and the females produce red berries that are toxic to humans. Here’s another asparagus fact you may not know—asparagus was long considered to be an aphrodisiac!

Asparagus comes in three colors: green, purple, and white. This collection features six popular varieties that will give you some diversity in your harvest to help supply your kitchen with different asparagus for different recipes.

All asparagus fall into these scientific hierarchy classifications:

A Brief History of Asparagus 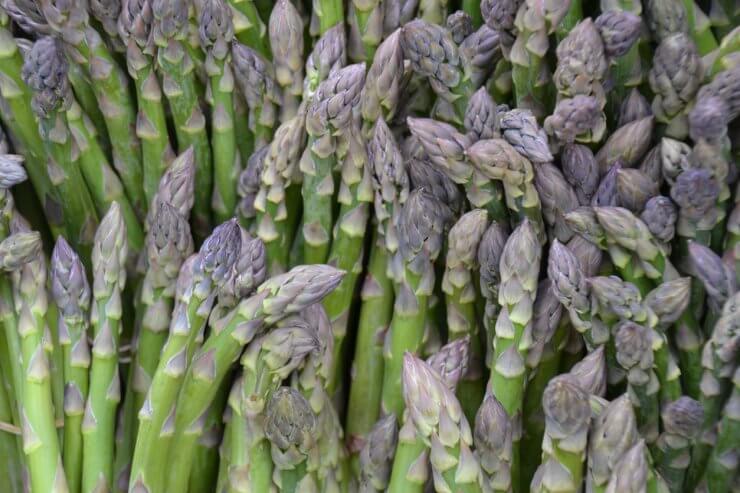 Asparagus has been prized as a vegetable, a diuretic, and a purported aphrodisiac for millennia. Egyptians pictured it as an offering to the gods in 3000 B.C. and it was known in ancient Syria and Spain. The Greeks and Romans ate it fresh in season and dried it for use in winter, while Roman Epicureans froze it high in the Alps for the Feast of Epicurus.

Asparagus has long been associated with royalty. Emperor Augustus created the “Asparagus Fleet” for hauling the vegetable and coined the expression “faster than cooking asparagus” for quick action. The Greeks associated it with fertility and the goddess of love, Aphrodite. Starting in the 16th century, asparagus was served in the royal courts of Europe and in the 17th century it was cultivated in France for Louis XIV who was, apparently, very fond of it, deeming asparagus “the king of vegetables.”

Dutch and English settlers brought asparagus to North America as early as 1655. In 1685, one of William Penn’s advertisements for Pennsylvania included asparagus in a long list of crops that grew well in the American climate.

Today, China grows the most asparagus by far, followed by Peru and Mexico.
The United States is one of the biggest importers of asparagus worldwide, though Michigan, California, and Washington are large producers. In fact, asparagus is so popular in the U.S. that festivals are held in California and Michigan to celebrate the noble spears. Cities in England and Germany—also top asparagus producers—hold festivals to appreciate asparagus and asparagus queens are crowned.

Have you ever visited the Asparagus Festival in the self-proclaimed Asparagus Capital of the World, Oceana City, Michigan? Please tell us about the unique ways you celebrate asparagus!