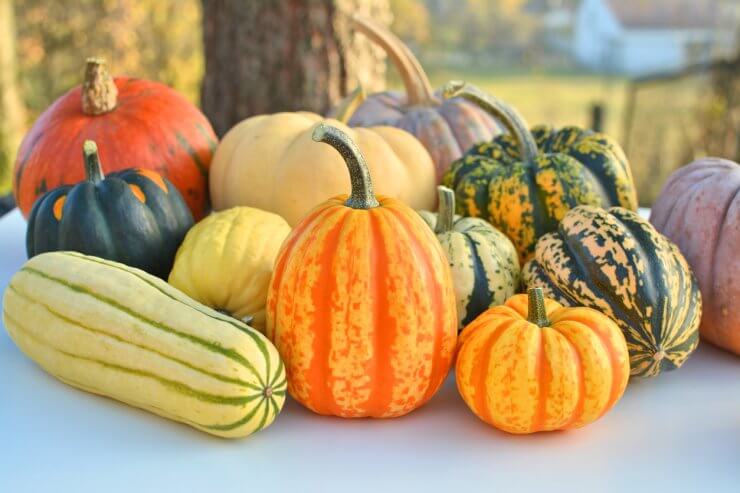 There are almost as many ways to categorize winter squash as there are varieties of winter squash. Some grow on long vines; some grow on short vines; some grow more like small bushes with hardly any vine at all. Some ripe winter squash can fit in your hand; others may weigh 10, 20, even 30 pounds! Some have skin tender enough to eat; others have armor-like exteriors that require a hammer to help you get a knife started to cut the squash open.

Once you’ve gotten your squash open, the color can range from almost white to pale yellow to vibrant orange. And the taste! Mild and sweet, deep and earthy—there’s a broad range available. Textures can vary from creamy to stringy. There’s a taste and texture here for every palate!

Winter squash are members of a much larger family—Cucurbitaceae—also known as the gourd family. This includes cucumbers, summer squash, watermelon, decorative gourds, and—of course—pumpkins. Well, since cucumbers, summer squash, watermelon, and pumpkins have scads of varieties of their own, we invite you to peruse those collections when you get a chance. We’re going to keep our focus on winter squash.

OK, first off: why is it called winter squash? We can’t traditionally grow hefty garden crops in the winter. So why the winter category? Well, it’s like this: summer squash, like zucchini, is harvested (and usually eaten) in the summer. The fruits (yes, technically, they’re fruits, even though we treat and eat them like vegetables) have tender skin and few seeds. Summer squash are harvested while the fruit is immature so those seeds that have developed are still in the soft stage. And unfortunately, summer squash doesn’t tend to store well: use them or lose them.

Winter squash usually have a tough skin and fully developed seeds. Because most of these varieties are so sturdy, they tend to store well. We harvest them late in the season—September or October, before the frost—and they can last through the winter. Hence, winter squash.

There are three main species in this family of cucurbits that comprise a bewildering array of squash: Cucurbita pepo, C. moschata, and C. maxima. Within those species you will find squash ranging in colors from white to yellow to orange to red to blue—yes, blue. The variety of flavors and textures is fantastic. There’s a winter squash out there waiting for you!

Winter squash prefer loose, loamy, well-drained soil with a pH between 6.0 and 6.8. Don’t know your soil’s pH? It’s your first best step in planning for a productive garden. The right soil is everything to a plant, so you want to make sure your soil is welcoming and nutritious for the plants you plan to grow. Get your soil professionally tested. Contact your local extension center for guidelines on how to sample your soil and send it in for analysis. This is one step that many gardeners skip—and regret later. So, don’t guess—get your soil tested! You—and your garden—will be glad you did.

A Brief History of Winter Squash 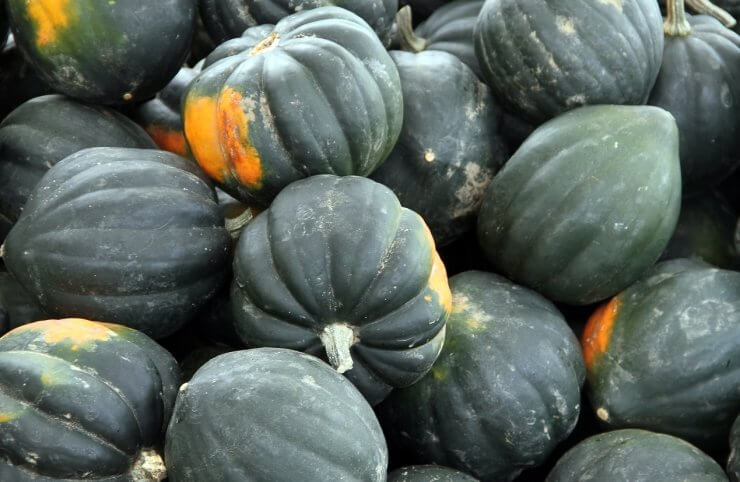 The history of the squash goes back more than 11,000 years, to the dawn of the Holocene Epoch. Archaeological sites in Mexico show signs of our earliest squash ancestors—wild vines with bitter fruit and edible seeds. Gradually, the tough gourds became containers, and people used them to store the nutrient-rich seeds.

Gradually, the Indigenous peoples of the Americas domesticated the squash as a food source. This was about 10,000 years ago—even before corn and beans were domesticated. The oldest domesticated squash species is C. pepo, which includes zucchini, acorn squash, and pumpkins. Researchers have found evidence of pumpkin seeds in Mexico dating back 7,000 years! Mexico is considered the origin point of this now wildly diverse genus.

Squash were unknown in Europe until the late 16th century. By that time, the Indigenous peoples of the Americas had been refining cultivars for centuries. By the 1800s, horticulturists were seriously pursuing the discovery of new species and the research and breeding of new varieties.

You’ve probably heard that you may be disappointed if you plant the seeds of a plant you’ve grown, because the resulting plants won’t grow “true to seed.” This is what happens when two different yet compatible species cross-pollinate. The seeds they produce will have traits of the other species.

Scientifically speaking, we have so many different types of squash because of the chromosomal makeup of the Cucurbita species. There are 20 chromosomes that aren’t completely separated by genetic barriers. This is what gives plant breeders the opportunity to develop new cultivars.

The corn serves as a pole for the beans to climb as they grow, and the beans help secure the corn stalk so it can stay stable in stormy weather. The beans also fix nitrogen in the soil, which is an essential nutrient for growing crops. And the large leaves on squash plants help shade out weeds and keeps the soil cool and moist. And wouldn’t you know—corn, beans, and squash help form a nutritious, balanced diet!

Did you know about the history of winter squash? Are you excited to try growing it? Let us know what you think.