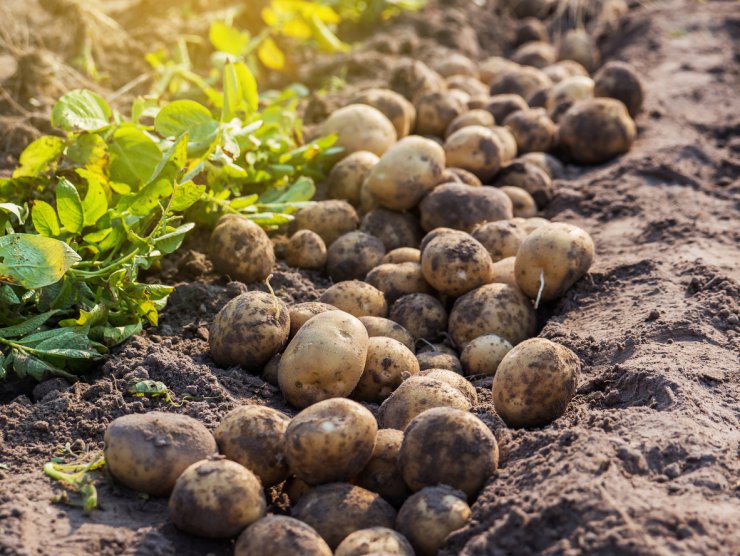 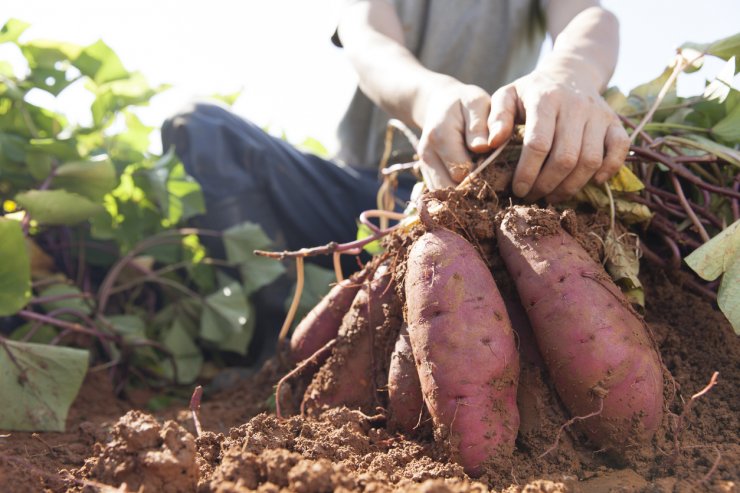 Enough of that; what we can agree on is that they’re delicious cooked up in so many different ways. The real question here is: how can I grow them myself?

Well, with a little patience and some TLC, you can grow delicious potatoes and sweet potatoes to get you through a long winter. They have different needs when it comes to growing temperature and soil composition; depending on where you live, you may find one is easier to grow than the other.

The good news is, you can grow both potatoes and sweet potatoes in your garden, in raised beds, and even in containers. And potatoes are among some of the most nutritious vegetables around. That old story about potatoes being fattening? Nope. Not true. They’re actually super nutritious and full of vitamins.

In fact, the potato is the third most important food crop in the world, right after rice and wheat. More than a billion people in the world eat potatoes and over 600 billion pounds of potatoes are produced every year. You can grow them right at sea level, or all the way up to an altitude of 15,000 feet.

Potatoes have been around for thousands of years, so it should come as no surprise that there are literally thousands of varieties, or cultivars, of potatoes—more than 4,000 at last count. We’re going to focus on the six basic types of potato and some specific varieties within those types that might work in your garden.

So here’s the classification of our friend, Mr. Potato, in this case the traditional, white “Irish” potato:

If you watch a sweet potato plant flower, you’ll see the resemblance to the morning glory. As a bonus, the leaves are edible and have some medicinal properties (more on that later).

But what about yams? I don’t know how to break this to you—the orange roots you’ve been cooking to make sweet potato pie and candied yams? They’re sweet potatoes. It all came out of a marketing ploy in the 1930s. Sweet potatoes come in many different colors—their flesh can be orange, white, yellow—even purple. Louisiana sweet potato farmers wanted to distinguish their orange-fleshed crop from the rest, so they started calling them yams. The name stuck, but it’s technically incorrect. If you see sweet potatoes labeled as yams, there should also be some fine print in the produce section that clarifies that “yam” in this instance is just a nickname.

An actual yam is a totally different root vegetable, and not commonly available in the United States. It’s used a lot in Caribbean and West African cooking. It’s more like a yucca in texture and flavor, and the flesh is more starchy than sweet. What we all think of as a yam is just a sweet potato by another name. Our focus in this collection is potatoes and sweet potatoes. The yams will have to wait. 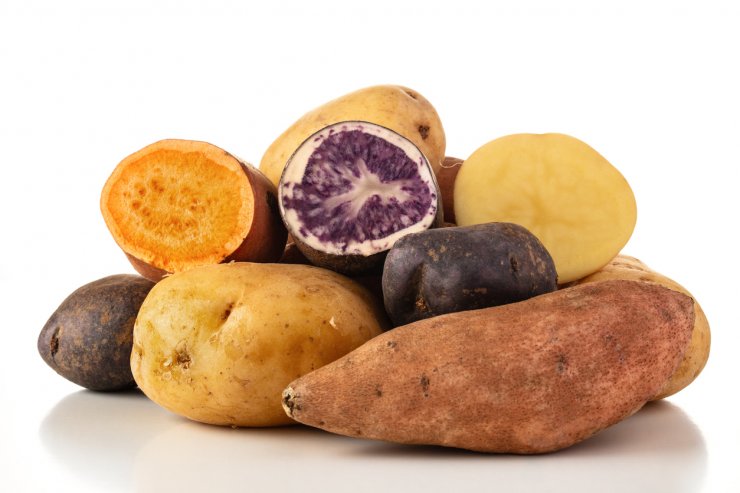 The potato is a real world traveler… from South America to Europe and eventually back to North America.

Its culinary cousin, the sweet potato, has a similar history.

The traditional “Irish” potato that we eat today can trace its roots back thousands of years to the Andes Mountains of South America. High on the Titicaca Plateau that stretches across parts of Peru and Bolivia, the Aymara Indians developed more than 200 varieties of potato—all at elevations over 10,000 feet! Potatoes became the foundation of the Aymaran and Incan diet.

You can see the potato’s influence in Incan art, too. Archaeologists often find potato-shaped pieces of pottery at ancient sites. Incans measured time by how long it took to cook a potato to different consistencies.

The itinerary of the potato goes like this. In the late 15th century and early 16th century, the Spanish Conquistadors roamed the wilds of South America in search of gold. What they wound up with was a treasure even more valuable: the compact, nutritious potato. Because potatoes are packed with vitamin C (45% of your daily requirement in one spud), sailors who ate potatoes didn’t suffer from scurvy—a nasty disease that affected sailors’ skin and made their teeth fall out. You can be sure the ship’s hold was packed with potatoes when the Conquistadors set sail for home.

But once they got back to Europe, it took a while for the potato to catch on. Part of its image problem was its membership in the nightshade family, and people avoided it out of fear of magic and poisoning. It’s most likely that the first potato crops in Europe belonged to those Spanish sailors saved from scurvy. By the late 16th century, the potato was a common food in Spain.

In the 1620s, Germany recognized the delicious, compact nutritiousness of the potato, and Frederick the Great ordered his Prussian subjects to plant and eat potatoes to protect against famine. Those who didn’t comply ran the risk of losing their noses and ears. And so the potato became a German staple.

In France, a young scientist who’d been a prisoner of war in Prussia was determined to make the potato popular in Paris; there was still resistance because of that whole nightshade family thing. He worked with chefs to develop fabulous potato dishes fit for a king and queen—Louis the XVI and Marie Antoinette, to be precise. Soon the commoners were clamoring for potatoes for themselves.

In Ireland, the potato was the top dog for all its nutritional qualities; it was possible for people to survive on potatoes alone if need be. Sir Walter Raleigh had introduced the potato to Ireland back in 1589. It was first a food for the landed gentry; eventually tenant farmers raised potatoes as a way to survive the long winter months.

But in 1845, the crops began to fail because of a fungal infestation—the blight. What’s known in Ireland as The Great Hunger, or the Great Potato Famine, killed as many as a million people in Ireland. The crops didn’t recover until 1852. By then a million more people had fled Ireland.

In North America, potatoes made their first appearance in the 1600s, to little acclaim. It wasn’t until Scotch-Irish immigrants planted potatoes in Londonderry, New Hampshire in 1719 that the potato began to grow in popularity and start to spread across the nation.

The sweet potato has been in Central and South America for time beyond memory—more than 5,000 years. Evidence of domesticated sweet potato has been carbon-dated on the Cook Islands in Polynesia back to 1210 to 1400. It made its way from there to Hawaii and New Zealand and eventually to Japan and China.

When Columbus landed at the Greater Antilles Islands, the natives there called sweet potatoes batatas. Christopher Columbus took them back to Spain after his legendary exploration. In Spain, they called them patatas. The Spanish introduced them to the English by serving King Henry VIII a delicious pie. King Henry took the tasty root back to England, where the vegetable’s name became potato. It wasn’t until the Scotch-Irish immigrants brought white potatoes to New England and beyond that the sweet potato got its descriptive name.

A yellow variety of sweet potato dominated the American market in the 1930s, which is when those clever farmers mentioned earlier took advantage of the southern slang term “yam” to distinguish their orange-fleshed root vegetable.

There are festivals all over the country celebrating the potato and sweet potato. Have you ever been to one? Did you already know all the history about potatoes? Please tell us if there are special ways you celebrate potatoes!