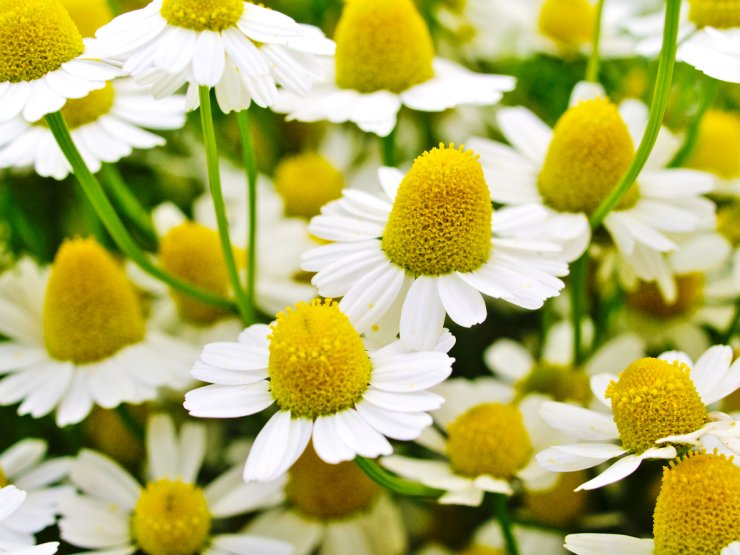 They look like miniature daisies. They smell like apples. Make tea from the blossoms to calm your stomach, relieve anxiety, and reduce fever. You can drink it, use it to soothe irritated skin, and add it to homemade soaps and shampoos.

Chamomile is an incredibly versatile plant. Chamomile tea is a popular bedtime beverage with a reputation for being a natural sleep aid. From potpourri to tea to tinctures of oil, chamomile seems to have something for whatever ails you.

Chamomile even makes a cameo appearance in the Tale of Peter Rabbit. Peter Rabbit’s mother gives him a soothing cup of chamomile tea when he comes home after a close call in Mr. McGregor’s garden.

All the potential health benefits aside, chamomile is a member of the daisy family. The flowers are so cheerful and delicate, they make a great addition to your garden, even if you have no intention of brewing a single cup of tea.

Chamomile is easy to grow, easy to take care of, easy to harvest, and packed with health benefits. What’s not to like?

There are primarily two species of chamomile that people use for tea and other herbal endeavors: they are commonly known as German chamomile and Roman, English, or garden chamomile.

Roman/English/garden chamomile is a perennial. It provides rich, fragrant ground cover and a light sprinkling of flowers. If you really love chamomile tea, this species may not be the right choice for your garden.

This is the classification of German chamomile:

As often happens in science, new discoveries replace previous understanding. You’ll also see German chamomile classified as Matricaria chamomilla or Chamomilla recutita. German chamomile is an annual, but as long as you leave some flowers still standing after your harvest season, the remaining flowers will reseed the ground, and you’ll have more plants in the spring.

Both species produce white and yellow, daisy-like flowers. Of the two species, German chamomile produces more flowers and so it’s the more popular of the two species for an herbal tea garden.

A Brief History of Chamomile

For centuries, people have recognized the flavorful and healing power of chamomile. It was used as an herbal remedy in ancient Egypt, Greece, and Rome. The Greeks thought it smelled like apples, so they called it Earth Apple. The ancient Egyptians found chamomile useful on several fronts: honoring the gods, curing the sick, and embalming the dead.

While the Egyptians dedicated chamomile to the sun and valued it more than any other herbs for it healing qualities, they also used chamomile to make cosmetics: crushed chamomile petals were part of an Egyptian noblewoman’s skincare regimen.

Records of the medicinal use of chamomile go back as far as an Egyptian papyrus dated to 1550 B.C. Notes from the first century A.D. in Europe praise chamomile as a health remedy. European doctors of the 16th and 17th century used chamomile as a fever reducer, among other things.

Fun fact: Even though Roman chamomile is a common name for Chamaemelum nobile, it actually wasn’t cultivated anywhere near Rome until the 16th century. The first “Roman” chamomile plants probably came from Britain, where people had been using chamomile as a medicinal plant for centuries. In the 19th century, a German botanist found some of the plant growing near the Roman Colosseum; hence the inventive name.