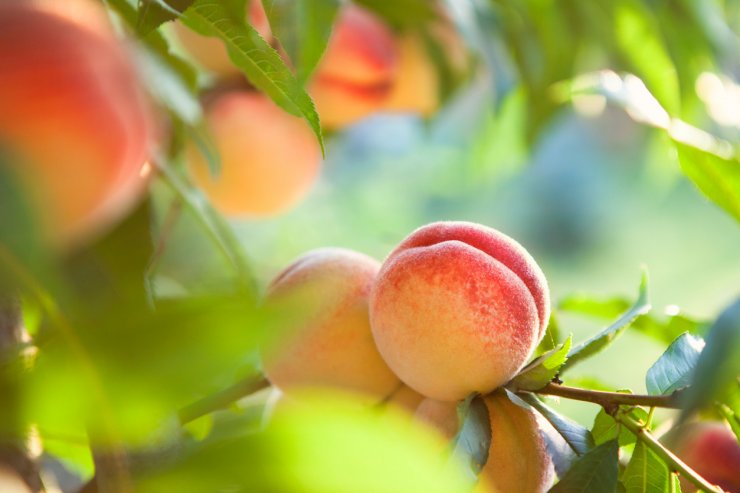 What other fruit is used as a synonym for someone who’s a delight to be around? Just the peach, as in “She’s a real peach!” There’s a reason for that: The peach really is a peach of a fruit, high in nutrients, low in calories, and absolutely delicious to eat.

It’s also easy to grow—with a caveat about pruning, about which more later—so there’s plenty of reason to add it to your food-growing repertoire. Sweet prunus persica (literally, “Persian plum”) is related to cherries, apricots, almonds, and plums—and it’s one of the fruits that make you think of summer.

Growing your own will allow you to choose varieties you like and even to grow peaches that aren’t sturdy enough to be transportable to supermarkets. It also allows you to avoid the pesticide residue that is commonly found in store-bought peaches.

And while the peach is a warm-weather-loving crop (but not too warm!), there are cold- and heat-hardy varieties that allow you to grow them outside their normal range of USDA Zones 5 to 8, not to mention the potential to grow them in containers.

The peach is a deciduous, perennial tree native to China. It grows 4 to 6 feet tall as a dwarf variety—perfect for home growers without a lot of land—or 25 feet tall for standard varieties. China is still a major grower, producing 62 percent of the world’s peach crop in 2018.

Peaches grow best where summer is hot and where winter temperatures regularly fall below 45 degrees F, but not below zero. Even if it does get a bit too cold in your zone, you can always plant one against a south-facing wall to get reflected heat, or even in a pot that can be moved to a warm, sheltered spot when necessary.

That leaves a lot of room for growing peaches—all 2,000 varieties of them—wherever you live! Soon you’ll be growing your own and using our recipes to enjoy your crop.

Tip: It’s a breeze to peel peaches if you use this method: Gently lower 2 to 3 peaches at a time into a pot of boiling water. Leave them in the water for about 30 seconds, and then remove them to an ice-water bath. The ice-water bath will shock them and keep the peach flesh from cooking, but the peach skin will slide right off.

Oh, and by the way: Everything that goes into growing peaches is applicable to nectarines, which are basically small peaches without the fuzz. So, if you like nectarines, too, feel free to try all of this with nectarine trees.

A Brief History of Peaches

Peaches are native to China, with cultivation starting as early as 6000 BC! But peaches were introduced to Europe by way of Persia (now Iran), hence the Latin name that means “Persian plum.”

From Europe, they were introduced to North America by Spanish monks near St. Augustine, Florida, in the mid-1500s. By 1607, peaches were widespread around Jamestown, Virginia. They proved easy to transport to new climates with their ability to grow from seed, and those peach pits we’re all familiar with were easy to preserve and carry from place to place.

Peaches spread throughout the south, but believe it or not, they weren’t a popular consumer crop for centuries. Up through the mid-1800s, they were sometimes used to distill into brandy, but also used as a food for half-wild hogs who were herded into the orchards to eat fallen fruit. It is believed that some slave owners also used the peach harvest as a kind of festival for their chattel, and that runaway slaves provisioned their secret journeys from untended orchards.

But it was in the 1850s that peaches began to come into their own. At that time, farmers began making a concerted effort to create a fruit industry in the Southeast, beginning a breeding campaign for peaches and other fruits.

It was the peachy peach that was the biggest success, and the industry as we know it today was born. Today we think of Georgia as the Peach State, and indeed a persistent marketing effort, highlighted by peach festivals across Georgia annually, sustains that belief.

Yet Georgia today has only 11,000-plus acres planted in peach orchards, compared to 1.4 million acres planted with cotton. And the state’s annual production of broiler chickens is worth more than 84 times the value of the typical peach crop.

Out of the 20 states where peaches are grown, U.S. peach production today is led by California, South Carolina, Georgia, and New Jersey. California supplies just over half of the nation’s peaches. But what would Georgia be without the Miss Georgia Peach pageant, or Atlanta without its 71—that’s right, 71—different Peachtree Streets?

Did you know that peaches are native to China? And that—while Georgia is known as the Peach State—California and South Carolina are number one and two, respectively, for peach-producing states? Please tell us anything unique you know about peaches.