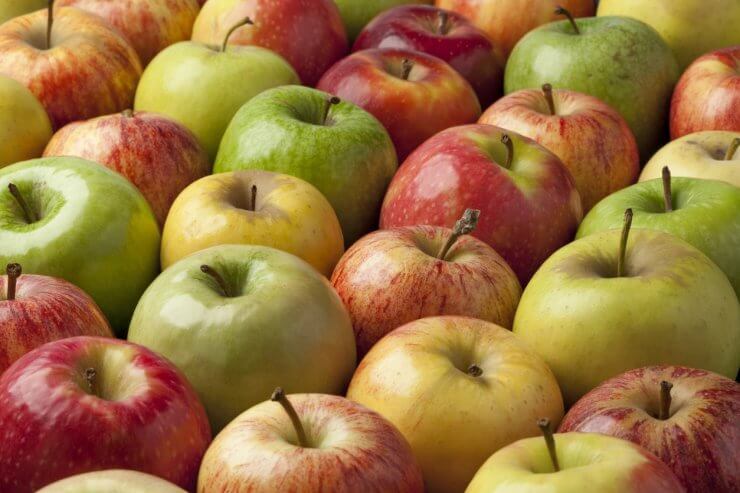 The apple plays a starring role in history, legend, literature, and—of course—gastronomy. Delicious, nutritious, versatile, and hardy—what’s not to love about apples?

The apple, Malus domestica, is a member of the rose family, along with pears, plums, peaches, cherries, strawberries, and raspberries. That’s quite a delicious family!

Throughout the world, there are about 7,500 varieties of apples. Of those, about 2,500 are grown in the U.S. That gives you more than enough opportunities to try growing interesting, different apples, depending on what you want them for: cooking, canning, eating fresh, or long-term storage.

Commercial U.S. apple growers limit themselves to only about 100 varieties. The top 10 commercially grown apples in the U.S. are:

How many of those varieties have you had? Apple orchards near you (if you live in USDA Plant Hardiness Zones 3 to 8) may have varieties you’ve never heard of. Not all apple trees are suitable to grow in all zones; when it comes time to choose cultivars to grow yourself, you’ll need to consult your local nursery to get trees suited for your growing zone. Now, if you live in a warmer zone, like 8 or 9, know that it is still possible to grow apples. You just need to pick a variety that has a low chill hours requirement—that’s the number of hours where the temperature has to be between 32 and 45 degrees F during the winter.

Because of the way apples are propagated—through grafting—you can now grow a 5-in-1 tree in zones 5 to 8. This unusual tree is self-pollinating and features five different varieties of apples on one tree! Ask your local nursery if they carry this uncommon tree.

The somewhat odd thing about apples is that they don’t grow particularly well from seed—at least, not the apples we’re used to eating. Much like other hybrid plants, the seed you plant may not at all resemble the tree from which it came. No two apple seeds will produce genetically identical trees. Most apple trees need to cross-pollinate with a compatible variety in order to produce fruit. And plant breeders want to keep customers happy with consistent cultivars. So, every year, fruit farmers invest a lot of time and energy grafting new apple scions onto a variety of rootstocks to grow trees that will produce predictable crops.

For all their popularity, the only apples actually native to North America are crabapples. All other apple varieties came to the continent from Europe—some as seeds, some as saplings. And those trees can trace their lineage back 750,000 years to the region that is now Kazakhstan.

Apples are grown throughout the U.S., but you’ll find the bulk of commercial growers in 32 states—from Maine in the northeast to California in the west. Washington state leads the nation in apple production, providing over half of the country’s supply of apples, with an annual yield topping five billion pounds. New York and Michigan trail behind with a production yield of just one billion pounds each.

Apples are celebrated all over the world. Chances are, if apples grow in the area, there will be a festival to celebrate the apple harvest. Leominster, Massachusetts—home of the legendary Johnny Appleseed—holds a two-day festival each year. The Green Bluff Apple Festival near Spokane, Washington runs over six weekends and features a wide variety of apples as well as fresh pressed cider. Canada, Mexico, Australia, Germany, and other countries also hold festivals to celebrate and showcase their apple varieties.

A Brief History of Apples 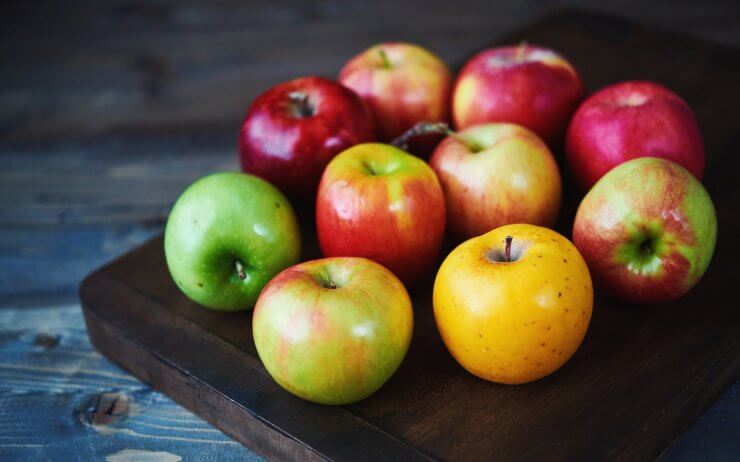 Cutting board with assortment of apple varieties

We can trace apples back to prehistoric times, to lake dwellings in Switzerland from the Iron Age. Archaeologists have also found evidence that Stone Age humans in Europe were preserving apples by slicing them and drying them in the sun.

Early writings in China and Egypt as far back as the first century include records indicating that people understood even then the art of grafting fruit trees.

Apples were a popular fruit in Europe for hundreds of years. When English colonists arrived in North America, they were dismayed to discover only crabapples. They were much relieved that they’d brought with them some of their own apple seeds and saplings.

The first orchards weren’t very fruitful; there were no honeybees to pollinate the trees. From 1622 to 1638, colonists welcomed shipments of honeybees from England. That got the orchards going. Eventually, almost all landowners had apple trees on their land.

In the 18th century, Robert Prince established the William Prince Nursery in Flushing, New York. During the Revolutionary War, the British occupying forces put an armed guard around the nursery—they considered it to be that valuable. When Lewis and Clark returned from their Northwest expedition, they sent many of their plant samples back to the William Prince Nursery.

And then there’s Johnny Appleseed—the man; the myth; the legend. For all the tall tales you can find about him, Johnny Appleseed was real. Born John Chapman in Leominster, Massachusetts in 1774, he grew up to appreciate apples in ways few people have since.

He left home with a bag of apple seeds, determined to spread the bounty of apple trees as he walked—barefoot by many accounts—westward into Pennsylvania, Ohio, and eventually Indiana. His goal was to plant apple orchards to welcome pioneer settlers as they moved west. He’d plant his seeds and set up a barrier of brush to keep critters away while his seeds grew. He’d return to his little orchards to check on them, then sell or give some of the apple saplings to settlers as he met them. The rest of the orchard he left for new settlers to discover and tend.

One of the things about Johnny Appleseed that you won’t read in most children’s books about this American legend is that the apples Johnny Appleseed planted and grew were nothing like the apples we get at the local grocery store or farmers’ market. Johnny Appleseed’s apples were more suited for making hard apple cider and applejack than apple pie. He got most of his seed supply from cider mills. The trees that grew from these seeds were known as “spitters”—as in take one bite, and spit it out.

But apple cider was actually better for pioneers than water or milk, which carried inherent infection hazards. So, cider was the most trusted beverage among pioneers until German immigrants brought clean beer-making techniques to the U.S. in the 1840s. Later, the Temperance Movement and Prohibition dealt a severe blow to the cider industry.

Johnny Appleseed was firmly in the “seed” camp rather than the “grafting” camp. He believed that apples should adapt to their new world home and his determination to grow apple trees from seeds eventually led to the development of new varieties such as the Delicious and Golden Delicious apples.

The last known tree to be planted by Johnny Appleseed is in Nova, Ohio. The tree produces tart green apples that are used not just for making cider, but for applesauce and baking. Johnny Appleseed, a lifelong proponent of seed-grown apple trees, might be surprised to hear that his last standing tree is a bud source for grafting new apple trees. One way or another, his legacy carries on.

Did you know about the history of apples? Are you excited to try growing them? Let us know what you think.