How to Stop the Japanese Flying Beetle From Destroying Your Garden 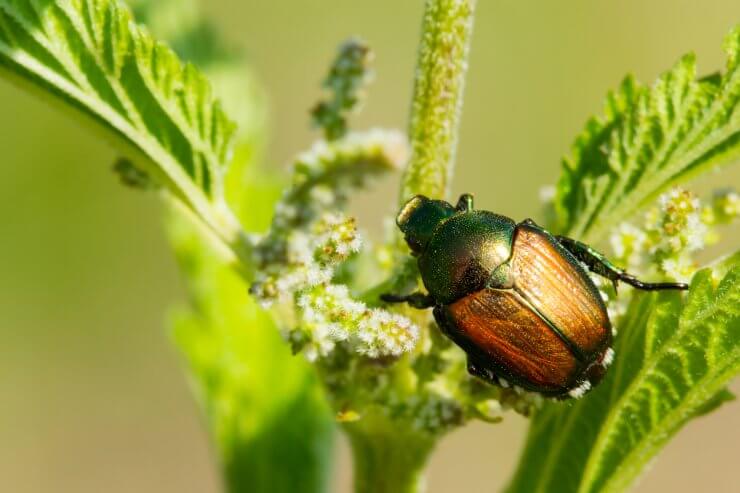 The Japanese flying beetle is quite the looker. The metallic green head and shiny copper wings make it look more like a jewel than a garden-destroying invader. Since the beetle’s accidental introduction to the United States in 1916, it has spread and flourished across most of the country.

The beetle is so prolific that it’s one of the most common beetles in the U.S., even though it has only been here for a century. Chances are good that you’ve seen them. They also happen to be quite the garden pest. 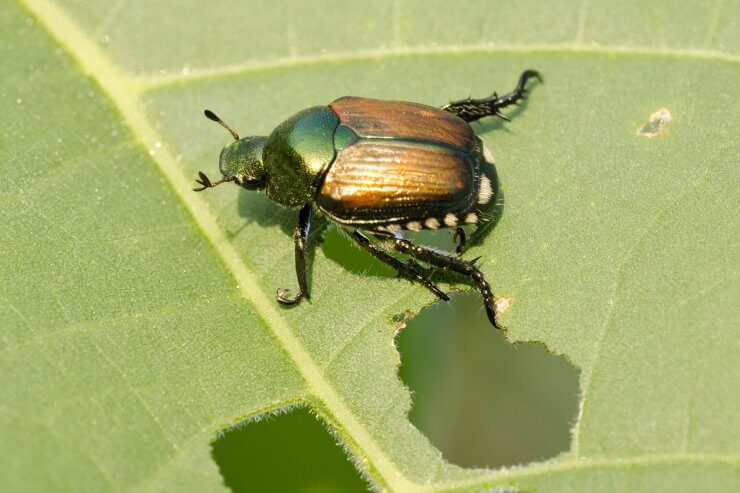 The Japanese flying beetle and the survival of your garden

The entomology departments at the University of Minnesota, University of Kentucky, and University of Florida all consider the Japanese flying beetle a “devastating pest.” If your garden has been unlucky enough to host them, you know how destructive they are.

The brown patches of lawn from the beetle grubs and the “skeletonized” plant leaves are common signs of the Japanese flying beetle. They often show up in large groups and devour foliage, and they can fly relatively long distances to munch on your garden. So even if you eradicate them from your area, you won’t necessarily eliminate the problem.

So what is a gardener to do? Especially if you don’t want to drench your vegetables in toxic chemicals?

Even though the Japanese flying beetle dines on over 300 different plants, there are a few out there that the beetle does not enjoy. Garlic makes a great companion plant for deterring the beetle, as does mint and catnip. In fact, all three of those plants discourage quite a number of garden pests.

Some gardeners feel that handpicking the beetles off your plants and dumping them in a bucket of soapy water is the best way to get rid of them. Indeed, if you catch them early enough in the season or have a smaller garden, this is feasible.

Neem oil is another popular natural insecticide that won’t harm ladybugs, bees, or butterflies. It’s toxic to insects that eat the coated plant leaves, so beneficial insects are safe.

You can use row covers, but they also keep pollinators away from your plants. That’s fine if you don’t have any plants that require pollination, but otherwise, you may want to use this option selectively.

One option you may come across are Japanese flying beetle traps. You can find them at most big garden stores and online. The problem with these is that they work a little too well. Many gardeners have found that the traps lure even more beetles to their garden. If you have a large infestation and aren’t having luck with any other methods, you could certainly try using a trap, but you may want to approach this solution with caution.

Unfortunately, pests are one of the problems that come with the territory of gardening. But gardeners have managed to work around that for ages, so don’t get discouraged.

How do you deal with pests like this beetle? I’d love to read your ideas in the comments.