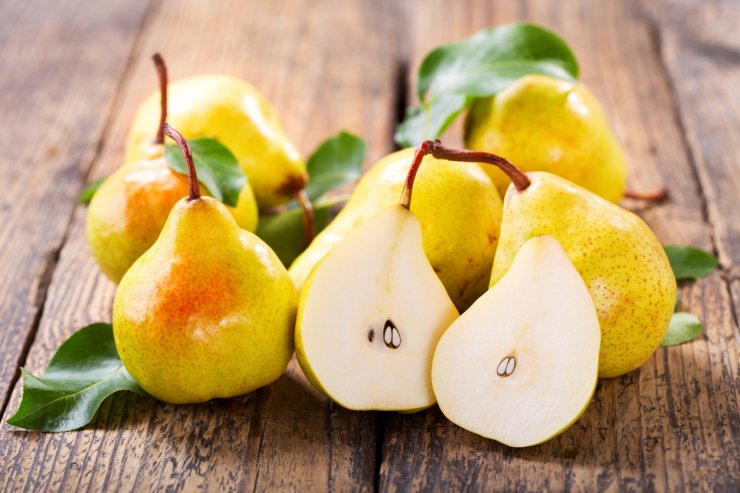 Pear trees flourish in temperate climates the world over. This delicious fruit is packed with vitamins and minerals, low in calories, and high in versatility. You can eat them whole, poach them, bake them into pies, cakes, muffins, and breads—and there are plenty of cocktail recipes that feature pears, too!

Pear trees are a feast for the eyes year-round: flowering in the spring, producing fruit over the summer, featuring flashy foliage in the fall, and providing a lovely landscape feature in winter.

If that’s not reason enough for you to plan to plant pear trees, consider these points:

Pear trees are easy to grow and can fit in pretty much any garden—you can even grow some pear trees in containers! There are thousands of varieties to choose from. Some are good for eating fresh; others are great for cooking. Some are good for both.

Most pear trees grow well in USDA Plant Hardiness Zones 4 to 8; there are a select few that are hardy to zone 3. Most pear trees need a lot of chill hours in the winter so they can produce flowers in the spring. Chill hours are the number of hours when the temperature drops below 45 degrees F in the winter. European pears need 600 to 900 chill hours; Asian pears need less, about 300 to 600 chill hours. There are a few exceptions. Some low-chill cultivars (cultivated varieties) are better suited for warmer regions in zones 9 and 10. So chances are pretty good there’s a pair of pear trees perfect for your garden, wherever you are.

Growing your own pear trees is a great food gardening project—but it does require patience. And pruning. You’ll get the hang of it; just know that you’ll likely need to nurture your new trees for at least two years before your first crop comes in. Some pear trees take up to 10 years to start producing.

Why trees, plural? Pear trees are not usually self-fertile, so they need a pollination buddy to help them set fruit. You’ll want to pick two different varieties that flower at or near the same time. Try to pick two varieties that mature at different times so you aren’t (ultimately) inundated by fresh fruit.

Pears love the sun and grow best in fertile, moist, well-drained soil with a pH of 6.0 to 7.0. They’re sensitive to frost, so find a sheltered site in your garden for them. You may plant your trees in late winter or early spring, while the trees are still dormant. It’s also possible to plant your trees in the fall, while the soil is still warm. Check with your local nursery or extension center for the ideal planting time for your area.

There are just two species of pear that are cultivated commercially for food, with thousands of cultivars developed from those two species. Some cultivars are trees; others look more like shrubs. Need a cool fact for trivia night? Pears are part of the rose family, which also includes apples, plums, strawberries, and, of course, roses. All pears fall into this scientific hierarchy classification:

A Brief History of Pears 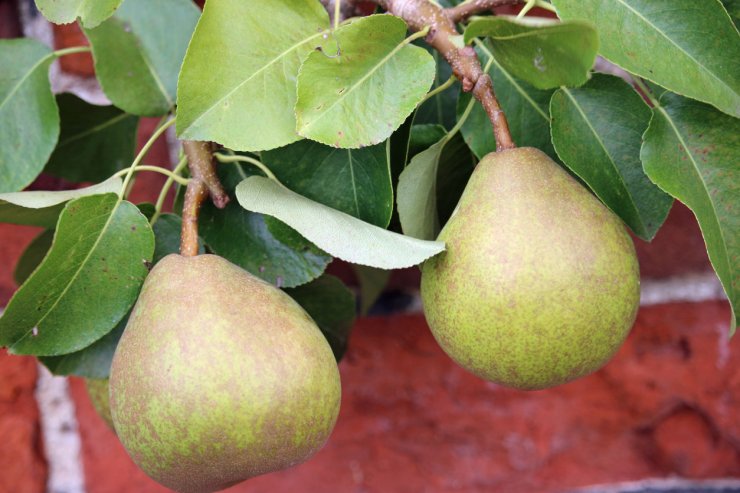 Pears hanging on a tree

Pears have a long history that reaches back thousands of years; their first mention in literature is in Homer’s ninth-century B.C. epic poem The Odyssey. Pears are mentioned alongside pomegranates and apples as one of the “gifts of the gods.”

The early Romans developed more than 50 varieties of pears and spread them throughout Europe. Hundreds more varieties have since been developed; the most popular pear is the Bartlett.

What we have come to know as the Bartlett pear was originally called the Williams pear in seventeenth-century England. Cultivation of pears in early America began with the first European settlers in New England in 1621. Colonial Massachusetts farmer Enoch Bartlett bought a farm that had a field of pear trees. In 1812, Bartlett started selling his pears under his own name, not knowing that this particular variety already had a name.

When a new shipment of pear trees arrived from England, it quickly became apparent that the Williams and Bartlett pears were one and the same. But alas, it was too late for the Williams name to take root in America; it’s still a Bartlett pear, at least in the United States and Canada.

The first mention of commercial cultivation of Asian pear trees dates back to about 5,000 B.C. A Chinese diplomat named Feng Li became obsessed with growing Asian pears. He was so obsessed, in fact, that he quit his high-powered diplomat job to become a full-time pear farmer. That’s dedication!

Pears are popular in much of the world, and there are, of course, festivals to celebrate everything pear. You can find pear festivals in the United States, Canada, Britain, Australia, and Japan.

In the U.S., the Kelseyville, California Pear Festival attracts thousands of people every year to sample homemade pear pastries, pies, cakes, and muffins. Festival attendees can go home with delicious pear treats or a box of pears to craft their own pear recipes at home.

Did you already know all this background about pears? Have you ever visited the Pear Festival in Kelseyville, California? Please tell us how you celebrate pears!