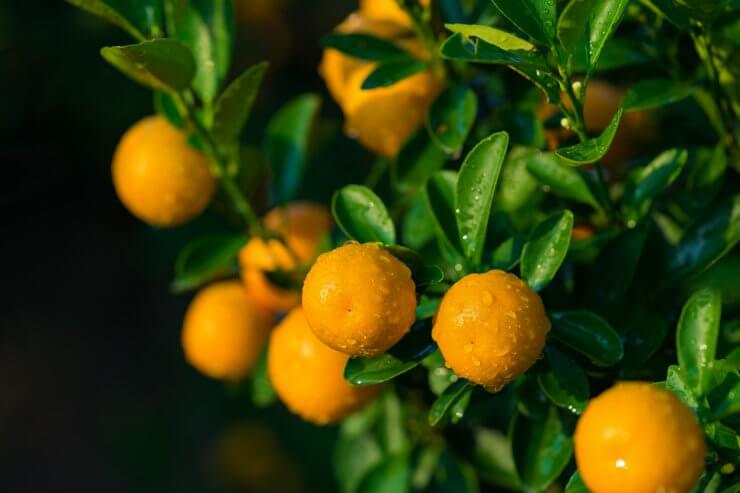 Kumquats are a delicious orange treat!

Kumquats are a delicious orange treat!

Kumquats—such adorable little gems; in Chinese, kumquat means “golden orange.” Sweet on the outside, tart on the inside, it’s the perfect-size fruit to pick fresh off the tree and pop into your mouth. You may have gotten them at the market, but there’s nothing to compare to the taste of a fresh kumquat warmed by the sun!

Kumquats are loosely considered to be part of the citrus family of fruits; that’s where you’re likely to find them at the market. They make great eating right off the tree; in marmalades, jams, and jellies; in salads and sandwiches; as pickles (yes, pickles!); in breads; baked into pies and cakes; even candied! You can even make a flavored vodka that will be ready in time for the weekend, for a fresh-flavored, fragrant martini. As an added bonus, most kumquats have very few seeds—from one to five—so they’re easy to prepare for whatever recipes you’re whipping up.

Kumquats are evergreen trees native to China and Japan; their leaves look more like those of deciduous trees, but these leaves don’t change color with the seasons. They can grow to a towering height of 15 feet! But not all kumquats grow that tall; some top off at 5 or 6 feet, making them a perfect candidate for container gardening.

These trees are easy to grow; all you need is full sun and well-drained soil. While kumquats are ideally suited for USDA plant hardiness zones 9 and 10, they can do well as container plants in cooler zones; in fact, they can handle winter temperatures as low as 15 degrees F!

With a little TLC, you can grow kumquats almost anywhere—as long as you have the right growing conditions, inside or out. Many gardeners in cooler zones move their kumquat trees outside for the warmer months and bring them back in when temperatures start to fall. So, if you love the taste of kumquats but haven’t tried growing your own tree yet, this could be the time!

All kumquats fall into these scientific hierarchy classifications:

Species: four species in all:

Now, not everyone agrees with this classification of the kumquat (who knew such a little fruit could be so controversial?)—whether it belongs in the genus Citrus, or whether it deserves its own genus. It acts like a citrus; it tastes like a citrus; but it doesn’t behave entirely like a citrus. And so you will find that many growers classify the kumquat as a citrus and not its own genus. Does it matter? It depends on how particular you want to be about your plant classification.

The USDA has declared the kumquat its own genus (Fortunella Swingle) in the family Rutaceae—which also includes our friends the citrus fruits. But you may see kumquats referred to as citrus (Citrus japonica instead of Fortunella japonica, for example). The cultivation requirements for kumquats and citrus are much the same, and kumquat trees are propagated by grafting cuttings onto citrus rootstock. So the only real argument might be who gets to pick the first fruits off the tree in your garden.

How to eat a kumquat
The sweetest part of the kumquat is the skin. It’s full of delicious essential oils that make the kumquat a fragrant, tasty treat. To get the most out of eating a kumquat, be sure to roll it between your fingers to start releasing the oil. Then, if it’s a smallish kumquat, pop it in your mouth and chew—really chew—to release more of the sweet essential oil to blend with the more tart-tasting flesh inside.

Find a seed? Spit it out; those aren’t really good to eat. And don’t bother saving it to plant later; kumquats don’t grow true to seed. Sure, they’ll grow, but who knows how they’ll grow? Plus, you’ll have to wait years to find out.

A Brief History of Kumquats 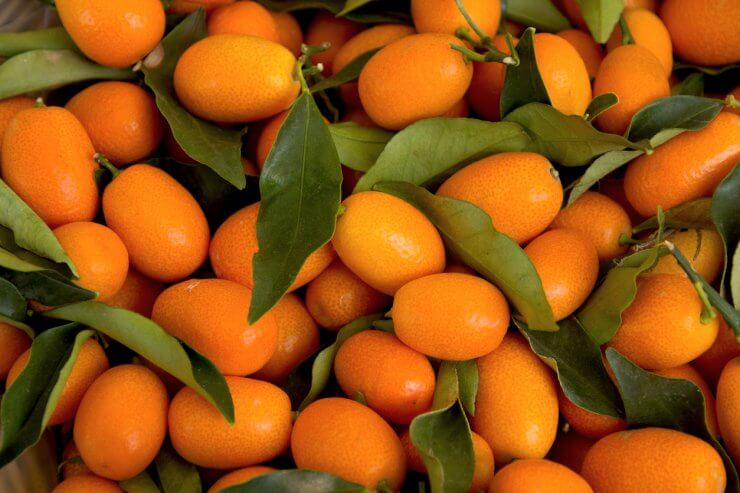 Kumquats are thought to have originated in China and southern Japan; an early reference to the tree in the 12th century called it a “gam kwat.” Kumquats are a sign of prosperity in China; people give them as gifts during the Chinese Lunar New Year.

In 1843, the Horticultural Society of London commissioned Scottish botanist Robert Fortune to go on a three-year plant collection expedition to southern China. Among the plants he returned with was the kumquat, then considered a citrus plant. But as Fortune introduced the kumquat to Europe and then America, it was reclassified with its own genus (conveniently named after him)—Fortunella.

In Dade City, Florida, the kumquat takes center stage every year for the Kumquat Festival. Thousands of people attend this free festival each year, where they get to sample kumquat pie and other kumquat delights. The festival promises family fun with an “old Florida” feel to celebrate the “little gold gems of the citrus industry.”

Have you ever been to the Kumquat Festival in Dade City, Florida? Please tell us about the unique ways you celebrate kumquats!