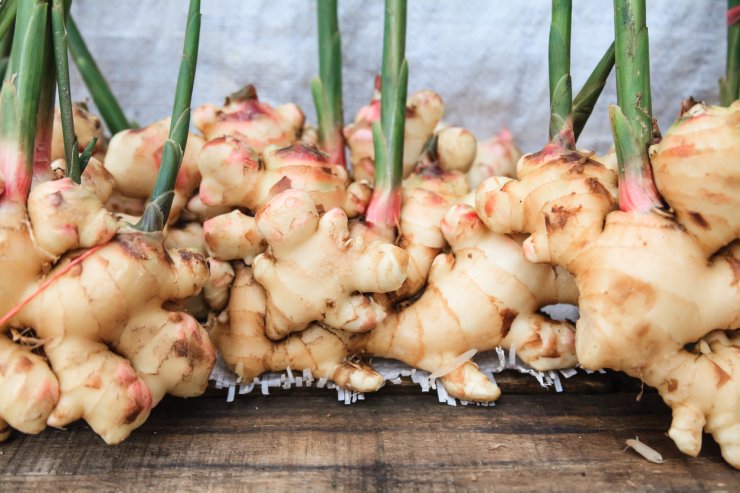 Ah, the fresh taste of gingerbread cookies, and the enticing aroma as they come out of the oven. The soothing sensation of steaming ginger tea. That extra zing in a stir-fry dinner. That palate-cleansing bite between sushi dishes.

All credit for such full flavor goes to ginger—official name, Zingiber officinale. Ginger is a tropical herbaceous perennial, most likely native to southeastern Asia. Ginger has a bit of a biting taste. It’s used fresh, dried, ground, preserved, and candied for a wide variety of culinary and medicinal uses.

Technically, the part of the ginger plant we eat is not a true root; it’s a rhizome. Rhizomes are actually subterranean plant stems that thicken up with food reserves for the plant. They also produce shoots above ground and roots below. The key distinguishing factors between true roots and rhizomes is that rhizomes can produce roots, buds, nodes, and sometimes, scalelike leaves. Roots anchor a plant, absorb nutrients from the soil and water, and store a little extra food for the plant.

But we call it ginger root anyway. Save your knowledge of rhizomes for the next trivia night.

While there are about half a dozen true gingers and many other species that are related to ginger but are not quite ginger, this collection focuses on the ginger that you’re likely to find available at your local market, garden center, or, yes—even a dollar or discount store. All true ginger falls into these scientific hierarchy classifications:

Ginger’s common name of Zingiber comes from the Greek zingiberis, which in turn comes from the Sanskrit name singabera. We tend to eat just the Zingiber officinale; the rest of the gingers are more ornamental and less flavorful—with the exception of a ginger plant popular in Japan.

The leafy stems of the ginger plant grow to about 3 to 4 feet high, with long, slender leaves up to a foot long. The flowers grow from dense, conelike spikes covered with leaves called bracts, with several small flowers on each spike.

However, the ginger plant does not require pollination to reproduce, so don’t worry if your ginger plants don’t flower. Ginger reproduces rhizomatously: You break off a chunk of rhizome (not a root, remember!) and plant that. The rhizome will set out shoots and roots, and with enough TLC, the plant will create a whole fresh new crop of rhizomes for your ginger cooking/baking/stir frying pleasure.

If you live in a tropical/subtropical zone, you can leave some of the rhizomes in the ground to sprout again in the spring. If you live in USDA Plant Hardiness Zones 1-6, you should bring those extra rhizomes inside and store them in a cool, dark, dry place until you’re ready to plant again; or pickle them, candy them, or powder them. Ginger is the gift that keeps on giving, season after season.

Speaking of season, be prepared for a long wait for your first “crop” of ginger to come in. The growing cycle of the plant is almost a year. It originates from the tropics/subtropics, where the weather stays warmer longer. But even if you live in a more temperate zone, don’t despair; you can grow your ginger in containers and bring it inside for the winter. Just be patient.

Turmeric is a close cousin of ginger. It’s also a member of the Zingiberaceae  family, but it’s in the genus Curcuma. If you love turmeric, you’ll be happy to know that it grows in much the same way as ginger, so you could try growing both!

A note on the name ginger

A lot of plants carry the moniker ginger, but they’re not all true ginger. In fact, there are some “ginger” plants from the Aristolochiaceae (birthwort) family that can be toxic. Asarum splendens, also known as Chinese ginger (how ironic, since ginger originally came from China) contains chemicals that are known to be carcinogenic and that can cause organ damage. When in doubt, check with a plant professional. If you’re just looking for ornamentals, that’s one thing; but if you’re growing ginger to eat, proceed with caution. To stay on the safe side, stay in the Zingiberaceae family and you’ll be OK. When in doubt, ask before you eat.

A Brief History of Ginger 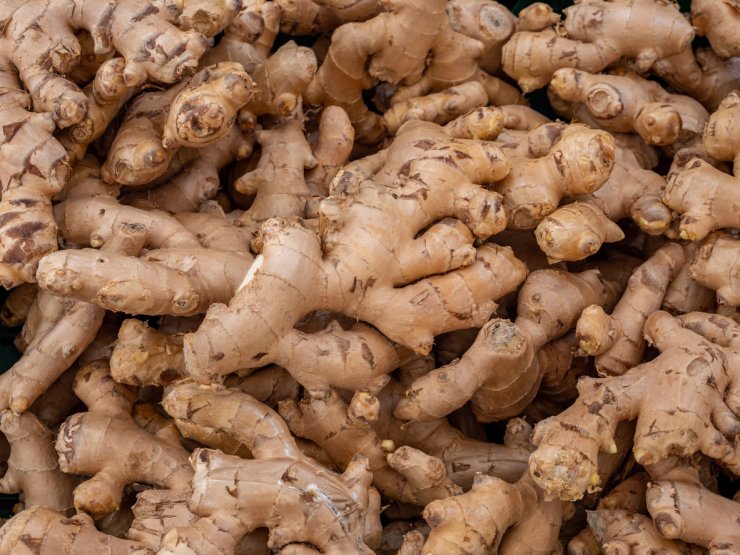 Ginger is a flowering tropical plant whose rhizome has been used as a spice and a health aid since ancient times. The first record of ginger appears in the southern parts of ancient China. From China, ginger’s popularity spread to India, the Spice Islands (how appropriate!), much of the rest of Asia, and on to West Africa.

Ginger has a history reaching back thousands of years. The ancient Chinese philosopher Confucius praised ginger’s healing powers, and the Romans considered ginger to be a symbol of both wealth and fertility.

China and India were not the only sources of ginger; by the first century, traders were negotiating for new crops of ginger throughout the Mediterranean region. When Rome fell, so did the interest in ginger. Explorer and savvy tradesman Marco Polo brought ginger back into vogue when he brought it back to Europe after his travels to the far East.

People have been trading ginger for hundreds of years, beginning in the 13th century. The precious rhizome (not a root, remember?) was dried in order to preserve it as traders embarked on long voyages from ginger’s Asian fields to the lucrative European markets.

Ginger was an expensive import in the Middle Ages, something only the wealthy could afford. In the 14th century, a pound of ginger was worth the price of an entire sheep. As explorers set out across the Atlantic, they introduced ginger to the natives of the Caribbean islands, where ginger grows easily. Humid, bright (but not too bright) spots make perfect homes for this versatile tropical plant. The Spanish explorers introduced ginger to the West Indies and Mexico. Soon after that, the conquerors were exporting ginger back to Spain.

Ginger also has a long history as an aphrodisiac. South Pacific islanders have long praised ginger’s warming properties, using it in love potions. Ginger is mentioned as an aphrodisiac in the ancient Sanskrit text of the Kama Sutra. And Madame du Barry, the notorious mistress of France’s King Louis XV, was reported to serve the king this inspiring ancient spice.

Foods with a faithful following often have festivals in their honor. Consider the National Cherry Festival in Michigan; the Picklesburgh Festival in Pennsylvania; the Peanut Boil Festival in Alabama; the Apple Scrapple Festival in Delaware; the Persimmon Festival in Indiana; and the Mushroom Festival in Missouri.

Well, ginger doesn’t get its own festival in the United States, but it has its own amusement park in Australia! You can spend the day at The Ginger Factory north of Brisbane, Australia. Ride the Ginger Train through lush sub-tropical gardens full of—you guessed it—ginger. There’s plenty to see—and eat!—at The Ginger Factory, including ginger ice cream. And when it’s time to head home, you can treat yourself to ginger cakes, cookies, teas, and more!

Have you ever gone to a food festival that featured ginger? Please tell us about the unique ways you celebrate ginger!