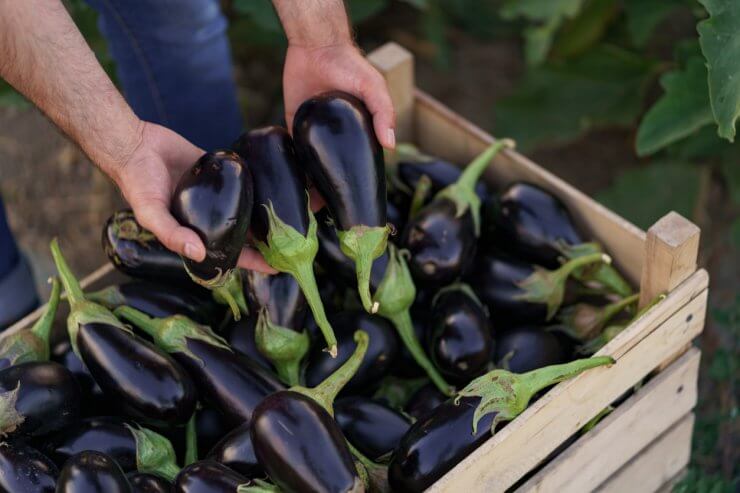 Eggplant goes by many names. In the U.S. and Canada their name is based on their egg-like shape, however much of Europe calls them aubergines and in Southeast Asia, they are called brinjals. Less common names are the garden egg, melongen, and guinea squash.

Eggplant is a delight to grow, particularly in warm weather climates, because they love the heat and are happy to grow all summer long. That said, even though they are a tender perennial, they can tolerate cooler weather as long as there’s no frost. As long as your soil is 50 degrees F, eggplants are happy to grow, making them easy to cultivate in the summer just about anywhere with a 65 to 80-plus day growing season.

You may think of eggplant as a shiny purple fruit, but it can come in many shapes and colors, for example:

People love to grow eggplant because they require little maintenance and produce lots of fruit.

Eggplants come from the same plant family as tomatoes, peppers, and potatoes, and are considered nightshade fruits like tomatoes and peppers, while potatoes are nightshade vegetables. Technically, they are berries.

Today, eggplants are grown worldwide, but they haven’t always been so beloved. Because of its relationship with various nightshade plants, the fruit was once believed to be extremely poisonous (but is now known to be safe). However, the flowers and leaves of the plant can be poisonous if eaten in large quantities because they contain solanine.

This is probably the root of the eggplant’s rocky past being noted as a fruit of the insane. According to 13th-century Italian traditional folklore, eggplant can cause insanity. In the 19th century, Egyptians also believed that insanity was more common and more violent during the time of the eggplant harvest in the summer.

If you ask us, you’d be insane not to eat eggplant!

As for the types of eggplant out there, you’ll find there are two main types of eggplants: long and round. The long ones are usually sweeter and less bitter than the round ones. Both types have thick skins and fleshy seeds. While all eggplants are edible, they vary in size and color according to where they’re grown and the varietals planted. Eggplant comes in many varieties, including the long, skinny Japanese varieties that look like cucumbers. There are also many small varieties available in grocery stores, such as mini, baby, Italian red, and Chinese eggpant.

Eggplant plants have leaves like other members of the nightshade family. However, the flowers and fruits are different. The flower head is generally a big white or purple flower with five petals. The fruit is shaped like a squash, and the meat is spongey like a mushroom. Eggplant comes in many colors, but is most recognized as purple, white, or pink.

The earliest known written records of eggplant come from China, where it was cultivated since at least the fifth century B.C. Arabic texts indicate that it was grown throughout the Mediterranean region during the Middle Ages, and a book on agriculture by Ibn al-Awwam in the 12th century describes how to grow eggplant.

Eggplant was then introduced into Europe during the 17th century, when they were adopted as a standard vegetable crop, especially by Italians and French. The word ‘aubergine’ in English was derived from Italian “auberga”, meaning “stewed or boiled”. This in turn comes from Arabic ‘albānjal’.

This plant of many names and backgrounds continues to be a favorite around the world!

A Brief History of Eggplant 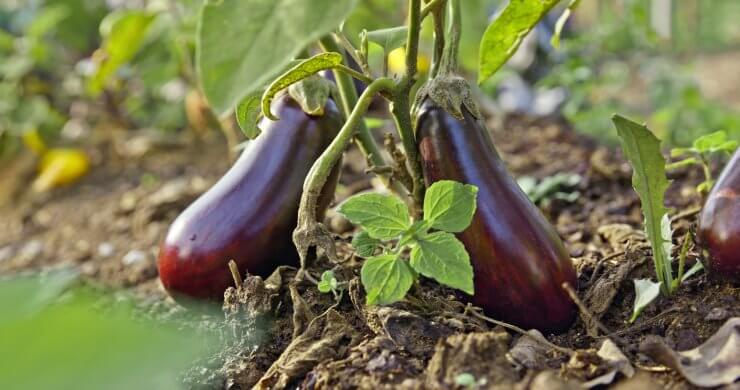 Eggplant growing in the garden

If there is a vegetable that has a colorful history, it’s the eggplant. Over time, this fruit has been feared, revered, and known by many aliases. We know it today as aubergine or brinjal in parts of Europe and Asia, while mentions of the vegetable from 2,300-year-old Sanskrit texts offer multiple names that translate roughly to mean “excellent vegetable” and “royal melon.” In the European Renaissance era, the eggplant was known as the “mala insane” (mad apple), and also the “pomo amoris” (love apple). The name “eggplant” likely comes from the white variety of the vegetable which can look like eggs.

While it’s generally agreed that the eggplant is indigenous to southern Asia and India, there is some evidence that the plant originated in parts of northeastern Africa, where some species of the plant still grow wild.

Even with the uncertain history, there is a lot we do know about the eggplant. In the Hindi system of Ayurvedic medicine, eggplants were used as a remedy for diabetes and as a treatment for asthma. As an agricultural crop, Chinese farmers were growing eggplants as early as A.D. 200.

Around the ninth or 10th century, Persian physicians used eggplants to treat ear diseases and help with indigestion. However, if not properly prepared, they also believed eggplants could cause such ailments as ulcers, constipation, insomnia, and even leprosy. The poor image of the vegetable could be, in part, due to the fact that Persian scholar Al-Razi described gum disease by noting the color was similar to that of an eggplant.

Even so, the eggplant was a beloved food crop throughout the Mediterranean basin. Eggplants slowly moved north and west as the Moors moved into Spain, and were widespread in Europe by the Middle Ages. References to the plant appear in “De Vegetabilibus”, a natural history tome written in 1256 by German scientist Albertus Magnus. The reception throughout Europe was mixed, though, as the plant is in the same family as both the poisonous belladonna and the mandrake. Superstitious Europeans feared the eggplant might be equally poisonous.

Even during the Renaissance, some herbalists warned of the dangers of the vegetable, while others lauded eggplants for their aphrodisiac qualities. Meanwhile, Spanish sailors brought the eggplant to North and South America.

Today in the U.S., eggplants are considered a specialty commercial crop, with only around 7,000 acres dedicated to eggplant production. New Jersey, California, and Florida are the top three producing states in the U.S. Worldwide, China and India are by far the largest producers, distantly followed by Egypt, Turkey, and Iran.

While the U.S. ranks 17th in worldwide eggplant production, you can still find celebrations of this vegetable. The Loomis Eggplant Festival, in Loomis, California, includes an eggplant cooking contest, live music, and a street chalk art contest.

Did you know about the history of eggplants? Are you excited to try growing them? Let us know what you think.