The Best Hydroponic System for Vegetables and Herbs 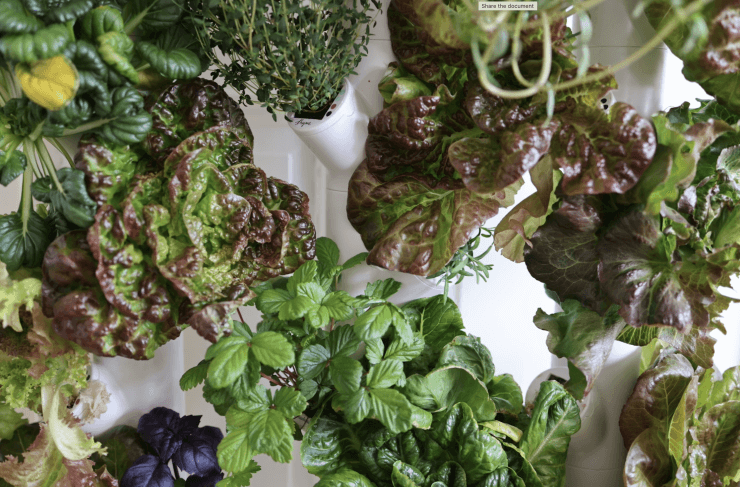 As someone who loves to cook and does it a bit for a living, I always need fresh ingredients, especially herbs. With so many lettuce recalls in the last few years, I’ve also gotten wary about purchasing store-bought lettuce. It was these two things that led me to seek out a way to start gardening indoors during the winter, and how I discovered the best hydroponic system for vegetables and herbs.

While it’s not important to everyone, it was important to me that the hydroponic system I bought into was a “smart” one, because I was (and still am) new to hydroponic indoor gardening.

In terms of a smart hydroponic system, I was looking for automatic watering (or a reservoir), automatic lights, and the ability to plant my own seed eventually, and not rely on buying from the system indefinitely. 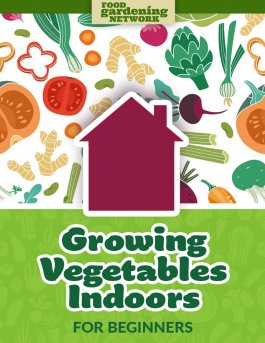 So narrowing down the best hydroponic system for vegetables, I landed on a decision between an Aerogarden, Click & Grow Smart Garden, and a Gardyn, which are all very different products.

Aerogarden | Buy it on Amazon 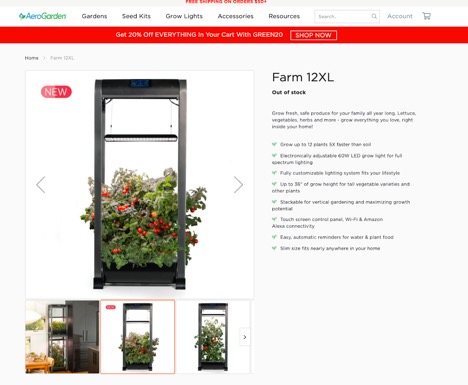 Aerogarden seems like the obvious choice, because it’s quite popular. When you search for the best hydroponic system for vegetables, Aerogarden will end up on the list. But out of the three options here, this is the only one I haven’t tried, mostly based on the structure.

I do have the smaller AeroGarden Bounty Elite, which I use for herbs and I love.

But for the purpose of this article, we’re talking about bigger grow systems that you could do some real indoor farming with during the colder months. The Farm 12XL and the Farm 24XL grow 12 or 24 plants respectively, but they are grown indoors like they would grow outdoors in a container garden, from the ground up. This didn’t seem to me like the most efficient use of space, which was also echoed in the reviews I read, so ultimately I never ended up trying the bigger Aerogarden models even though, of the three, they have the most reviews and are a household name.

In terms of growing traditional, bigger vegetables, the Aerogarden may be the better fit than the other two choices, but I imagine you’ll sacrifice volume with the limited space, and personally I don’t need a bunch of smelly tomato plants growing indoors with all the fuss of hand-pollinating them; I can wait until summer for tomatoes. 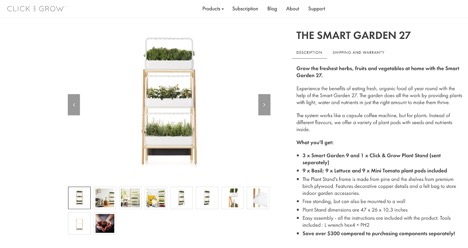 The Click & Grow Smart Garden (first the 3-pod, then the 9-pod) is the first indoor garden I’d ever tried, and I used it for years to grow herbs. In terms of growing herbs for the winter, this is all any chef needs for a kitchen garden. I used the Smart Garden 9 most which is just under $300.

For equal comparison’s sake, the model most close to the AeroGarden above is the Click & Grow “Smart Garden 27”, which looks comically like it’s just three 9-pod Click & Grow Smart Gardens on a stand. I haven’t used three at a time, for the record, but just one is enough to have an opinion, which is this.

The Click & Grow is probably the best hydroponic system for herbs, and it’s pretty to look at if you have the counter space (2’w x 1’4”h x 7”d), but its limited space is a bit too small for growing real vegetables. Even my herbs would eventually outgrow the system, get burned by the lights, and need to get re-homed. I was not successful with growing any vegetables like tomatoes or peppers in mine, though I know many people have been.

I also found that the pods, which are reusable, tended to get mold in the filter that couldn’t be removed and are meant to be re-used. The seed pods, which you purchase from Click & Grow are made of a patented “smart soil” which already has the nutrients in it that plants need. The fact that they use soil makes it easy to transplant your herbs outside, which is nice if it’s summer, but you can also move them into a container.

My goal was to grow and keep everything indoors, so when I decided to grow more than herbs, I outgrew what I felt were the limitations of this garden.

On the plus side, it’s incredibly easy to clean, easy on the eyes, and easy to grow herbs, which is why I’d say it’s the best smart garden for growing herbs.

Gardyn | Buy it on Amazon 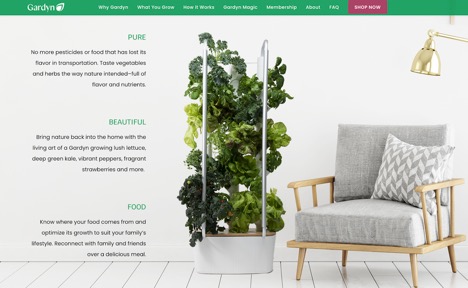 After much research, and trial and error with the last system, I landed on Gardyn, which at the time felt like a risky move because they were a newer company at the time. But after looking into the company, the owner’s stories, and joining their “Gardynrs” Facebook group to talk to other users, I felt confident in buying this system, and I now feel like it’s the best hydroponic system for vegetables and herbs.

The Gardyn is pretty to look at and the pods all have codes on them, which the system reads and offers tips for your plants, like harvesting, watering and lights. The pods that you buy from Gardyn are biodegradable, so if you did decide to remove them you could plant them in the ground. They do not, however, wash well in the dishwasher for re-use, which I learned the hard way. You can, however, wash them by hand, buy your own rockwool for cheap, which is what the system uses, and plant your own seeds. This alone made the system worth it because I didn’t feel dependent on the company if they ever closed down.

In terms of growing vegetables, it works beautifully. You can grow 30 plants at once, so I like to grow a number of different lettuces, and one of every herb possible. I grow my lettuces at the top, herbs down the middle, and my bushier veggies, like celery, swiss chard, mustard greens, even strawberries on the outsides. I have also grown Fiesta Gitana flowers, tomatoes and peppers. I have seen others use strings across the back to grow beans, and members of the Gardyn Facebook group take on personal challenges to push it to its limits, and it seems you can really grow anything that grows above ground (so no carrots, sorry).

Below is a photo of my first Gardyn. It’s bursting with lettuces and herbs, which I think is where this hydroponic system really excels. 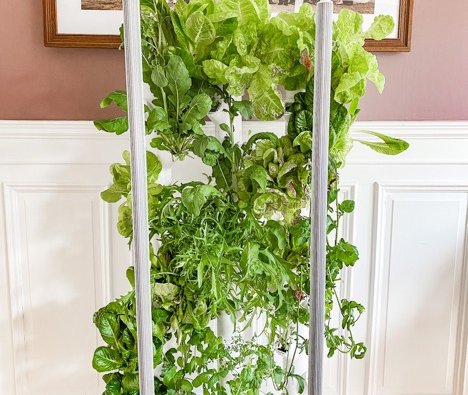 And this is my most recent year’s garden where I got more experimental with growing things like strawberries, peppers, and chamomile, though I do still like to stick to lettuces and herbs because I use them most. I did bring some new plants into the house, which ended up infesting my Gardyn plants with spider mites. Bah! 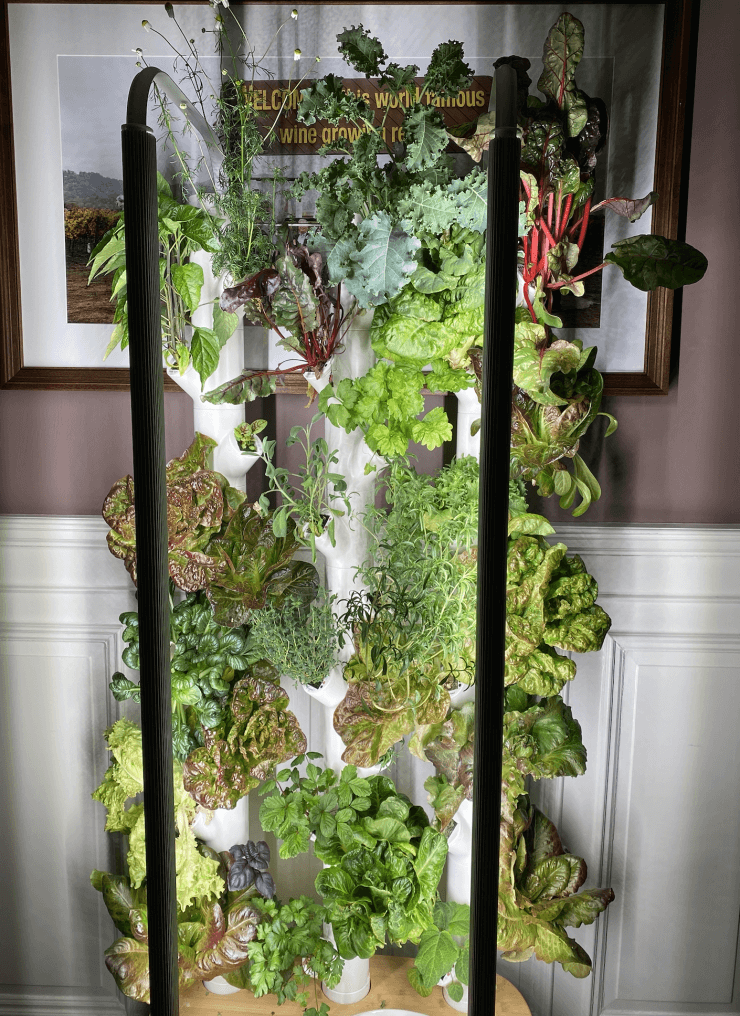 The amount of greens I harvest from this thing is over the top. 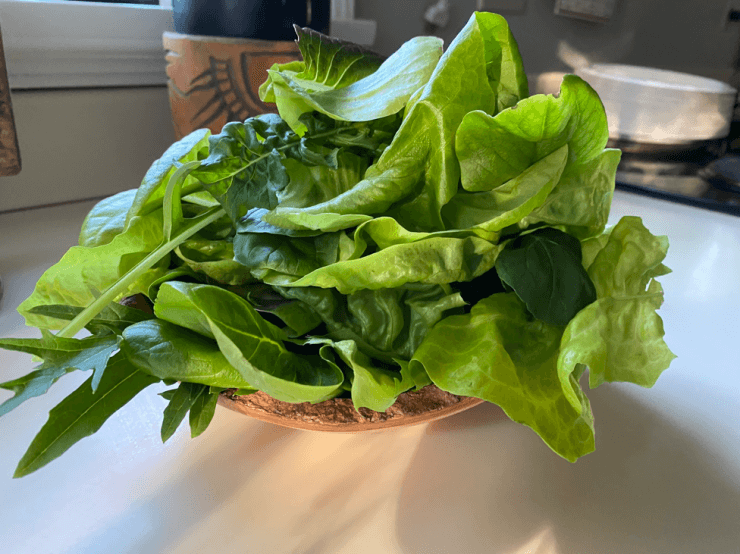 The cons of this system is that after a month, there is a membership fee to keep the automatic alerts and watering working, however I never used it after the first month and my plants have had no issues growing without them. You learn a lot from the assistant in that first month so that you don’t need the prompts. However, the membership fee also includes 10 pods per month. My first 30 pods lasted 4 months (some longer) so I didn’t see the need for a membership.

This system is a lot bigger, and more complex than the simple Click & Grow, so cleaning it once per month as recommended is a light chore, but still a chore. When I decided to harvest everything and start over with all new pods, that was a process as well.

All that said, I love the Gardyn. It took about a month to get started, and in the middle of winter with a husband who hates to use the heat, not all the pods sprouted in the first go. Though, the company replaced all those pods for free. I feel confident I’ll be using this for a while, and I don’t have any reason to want a different kind, so I’m dubbing the Gardyn the best hydroponic system for vegetables and herbs, based on my experience.

I’d love to hear your opinion about the best hydroponic systems for vegetables. Which hydroponic gardening system do you use, and do you like it?

Note: Food Gardening Network contains links to affiliate websites including Amazon and Rakuten Affiliate Network and we may receive a commission for any eligible purchases made by you through links on this page.

« The Best Grow Lights for Tomatoes and Peppers
Why is My Cilantro Bolting? (And 7 Ways to Stop It) »