The Three Sisters of Companion Planting

Where would wine be without cheese, or peanut butter without jelly? Simon without Garfunkel? And let’s not forget our special guests today, the “Three Sisters” otherwise known as corn, beans, and squash.

Native Americans have long understood that some plants work better together, and the Three Sisters’ planting method is based on centuries of Native American agricultural traditions. The name “Three Sisters” comes from the Haudenosaunee, also known as the Iroquois, who inhabit areas around the Great Lakes. The Haudenosaunee method includes planting the seeds of corn, beans, and squash together in the same mound. The mound is used, like it often is in planting, to prevent the roots from becoming waterlogged.

The Three Sisters garden mound has corn in the middle, pole beans around the corn, and pumpkins or other types of squash at the corners.

Beans fix nitrogen in the soil; surprise — corn and pumpkins are heavy nitrogen users. This benefit can result in faster growing and more prolific corn.

It’s a perfect “I’ve got your back” sort of planting, and the best part is that all three can either be dried or stored for the winter. The three also create a nutritional balance of carbohydrates, protein, and vitamins. Corn is high in carbohydrates, while the beans are full of protein and amino acids, and squash is rich in just about every great vitamin and mineral.

There are a few other rules to keep in mind too:

Today, farmers plant the Three Sisters in large fields to maximize yield. Traditionally, the plants were planted in mounds to drain excess water. Farmers also plant them closely together so they can grow close enough to support each other.

How to create the perfect “Three Sisters” mound

The technique for planting the Three Sisters is a bit more nuanced than just planting them in close proximity.

Generally speaking, corn wants to grow in a group, and close together, which makes this planting method make a whole lot of sense. Two things to know:

This Three Sisters planting diagram displays the most basic layout for creating traditional Three Sisters mounds in the Haudenosaunee way. Keep in mind that you want at least 25 corn plants within close proximity to one another in order for them to pollinate naturally, and ideally in a square. A 5×5 grid would be ideal, with room to walk between the mounds. 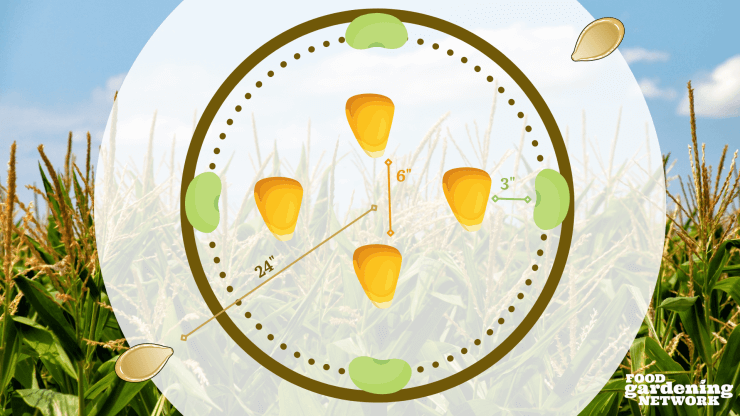 How to create a Three Sisters layout without mounds

Planting in mounds isn’t the only way to benefit from planting the Three Sisters. In fact, other Native American tribes have entirely different approaches to organizing these companion plants. Below is a traditional Tarahumara field.

In this Three Sisters planting diagram, a block of at least 5×5 (this diagram is more ideal at 10×5), corn is planted 6 inches apart. The corn is then surrounded by beans on every side that are planted 3 to 12 inches from the corn. On one side, to avoid issues harvesting the corn and beans on the other sides, squash is planted 3 feet from the beans. 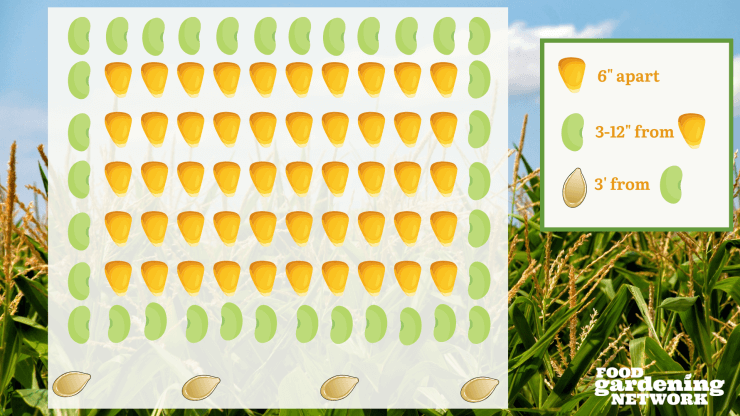 While this set of companions is clearly beneficial, I have a friend with a sensitivity to corn who instead will plant giant sunflowers and beans (or petite cucumbers), which will climb the sunflowers. Personally, the cucumbers sound like a stretch, but I like the idea. As for the vines below, you can also swap in melons.

I’ve read conflicting information about what happens to the soil around sunflowers that may hinder other plants from growing, but I haven’t personally experienced this. Have you?

What about growing the Three Sisters? Have you seen them grow together? Leave a comment below with your thoughts, and additions to these planting designs. 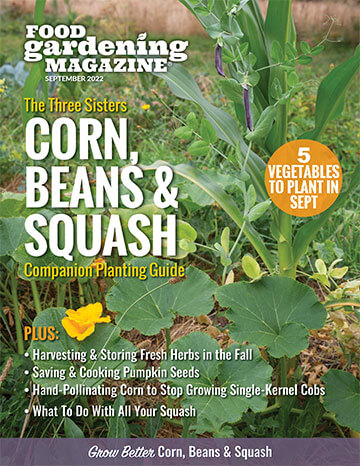