The Best Type of Asparagus to Grow: Green, Purple, or White? Maybe, but let’s talk about why.

Three Types of Asparagus to Grow 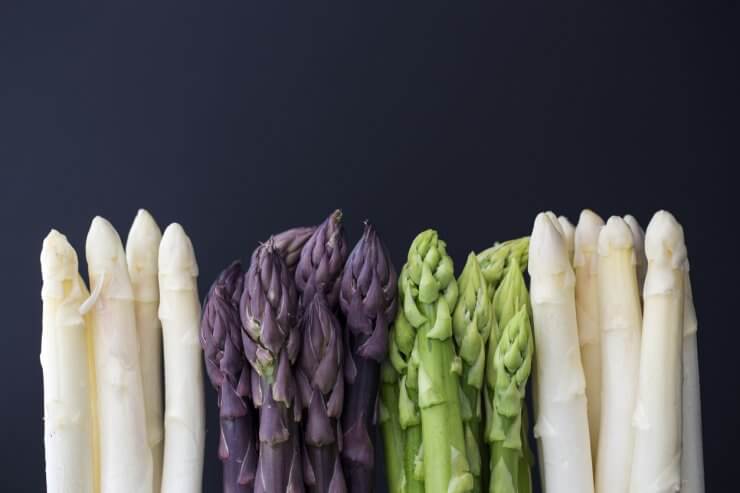 Green asparagus is by far the most popular type of asparagus plant and it grows almost anywhere. It is characterized by bright green stalks with pointed tips that are often purple. A bit grassy in flavor, green asparagus is considered the most nutritious type and has the most fiber.

Purple asparagus was developed in Italy and is relatively rare in the US. It gets its color from high levels of anthocyanins which are high in antioxidants. Purple asparagus is somewhat nuttier and sweeter than green asparagus because it has about 20 percent more sugar. Despite its ‘royal’ skin, purple asparagus is green or white inside the stalk and will turn green when cooked. To enjoy its original color on your plate, eat it raw or lightly steamed. 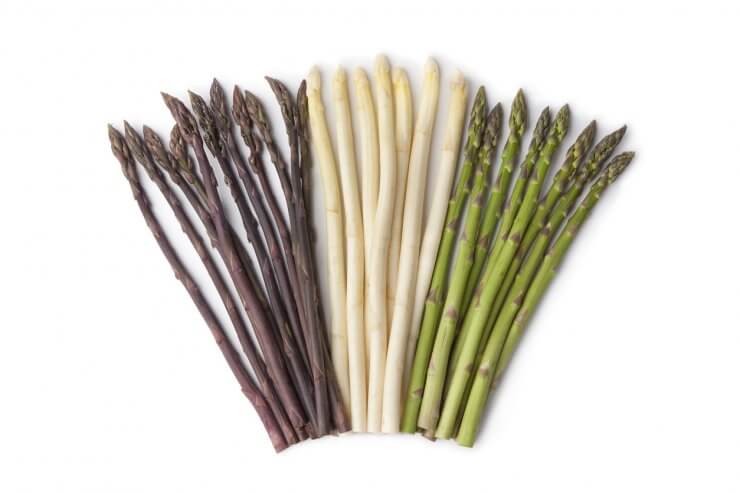 There are more flavor nuances to asparagus plants, depending on their colors too:

Green asparagus—the most common—has a slightly grassy flavor with a high degree of fiber and superior nutrition. Its flavor and texture goes well with butter, lemon, eggs, salads, and most seafood, poultry, and meats.

Purple asparagus has a sweet, nutty flavor owing to the higher amount of sugar in it compared to other varieties. This type will turn green when cooked, so it’s best served raw in salads or lightly steamed to preserve its unusual color.

White asparagus tends to be more fibrous, with woody stems that should be trimmed before cooking. Because of its density, white asparagus takes longer to cook than other types and lends itself to grilling. It is most often served whole with melted butter or hollandaise sauce.

The best type of asparagus to grow really depends on you, and the effort you want to put into your garden. Obviously white asparagus sounds like a fun novelty, but it’s a bit of added work, and maybe adding a little ugly to your garden with a tarp you have to keep over your crop. But, if you’re looking for ideas of which ones to grow, here are a few ideas.

The Best Green Asparagus to Plant 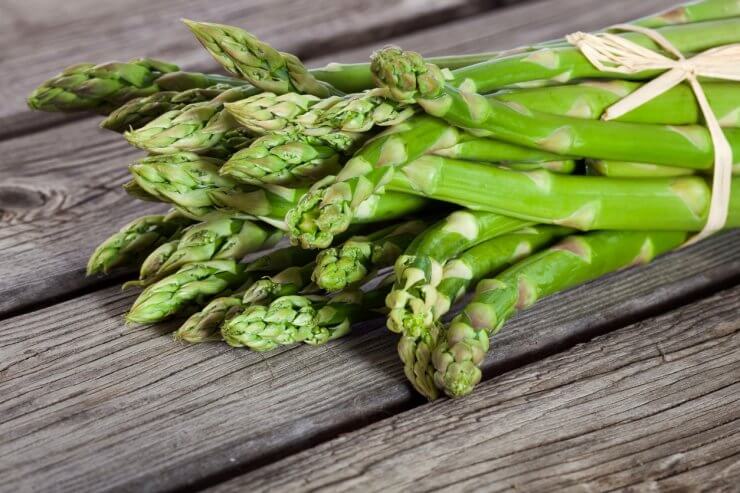 Jersey Giant asparagus is one of a group of three popular “Jersey” asparagus series, including Jersey Knight and Jersey Supreme. You can’t go wrong with any of these hybrid varieties, but many gardeners like Jersey Giant for its high yield of male-only plants and tender, flavorful spears. This variety also resists asparagus rust and fusarium rot, and is one of the most winter hardy varieties. Its foliage grows in shades of green, up to 5 feet high. With its large, tasty spears, you can serve Jersey Giant asparagus alone as a green vegetable with little or no adornments, or as part of a more complex dish.

The Best Purple Asparagus to Plant 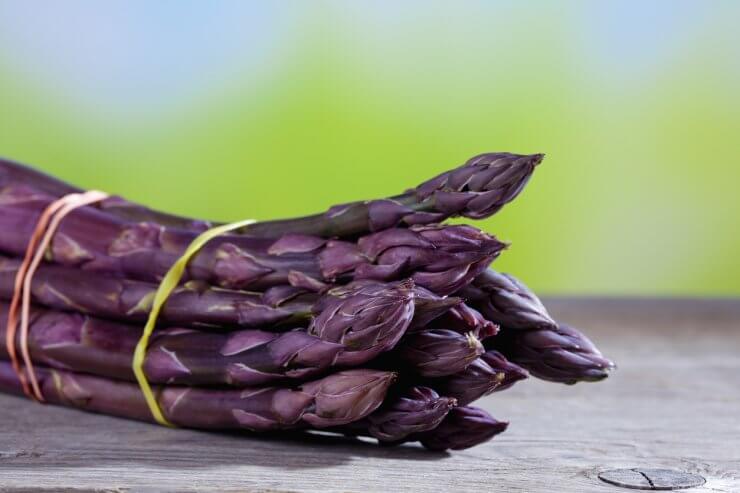 Considered the gourmet’s choice, Purple Passion asparagus is one of the most popular purple varieties. It contains 20 percent more sugar than green asparagus and takes on a nutty flavor—and turns green—when cooked. Purple Passion asparagus spears are so sweet and tender they can be eaten straight from the garden, as a raw snack with your favorite dip. Not only are the spears a beautiful color, but the Purple Passion’s foliage is light and airy with creamy yellow to green flowers. This asparagus variety is a real stunner in the garden and on your plate!

The Best White Asparagus to Plant 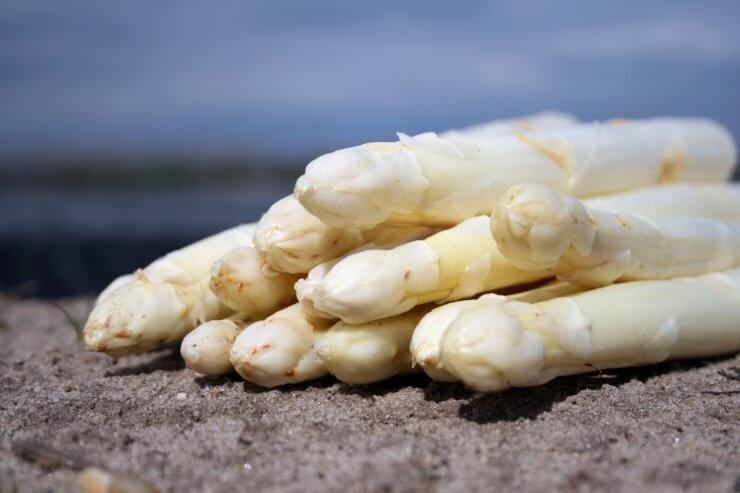 Precoce D’Argenteuil  is an heirloom variety dating back to the 19th century and is prized in Europe for its delicious stems and bright, rosy buds that can be blanched white. ‘Precoce’ means ‘early’ in French (Argenteuil is the name of the town in France where it gained popularity), and this plant is early in a couple of ways. First, it is usually ready for harvest in two years rather than the typical three. Second, it’s one of the first asparagus varieties to emerge in the spring. If you are going to bleach this crop, you need to be ready with topsoil or a black tarp to keep the sunlight out as soon as the tips begin to emerge. Not only does this asparagus variety look pretty on a plate, but the sweet, mild, slightly nutty flavor is exquisite!

Do you feel like you know the best type of asparagus to grow? Want a home garden crop that will produce delicious, nutritious, stately vegetables for decades? Then plant asparagus. You’ll need a little patience at first, but once established, asparagus will reward you for years to come. With the Asparagus—King of the Garden premium gardening guide, you’ll have everything you need to know about growing and enjoying this versatile food. From the history and background of the revered asparagus plant to specific advice about soil requirements and fertilizer … from watering techniques to details about avoiding root rot … from easy-to-make and delicious recipes that will allow you to enjoy the fruits of your gardening labor to the nutritional benefits of asparagus—get it all in the Asparagus—King of the Garden gardening guide right now! 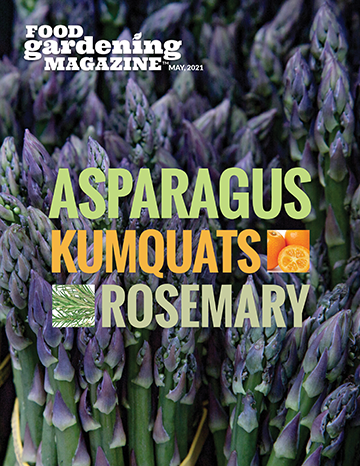