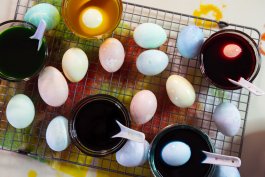 Have you ever wondered why so much packaging these days proudly says that they are dye-free and why so many children’s products only use natural dyes? It’s because commercial dyes used to dye foods have a proven track-record for ill effects on humans. I’ll give you a shortlist below, and you’ll be primed and ready to know how to make natural dyes from vegetables.

And where can you find synthetic food dyes? In everything. All of it. Candy, cake mix, salad dressing, salsa, toothpaste, drinks, smoked salmon, applesauce, pickles. You name it. A decade ago, 90% of products marketed to kids contained synthetic dyes. Luckily, we’re getting hip to the risks. Still, in 2016, a study by CSPI found that 43% of grocery-store kid products used synthetic dyes. According to the study, “candies marketed to kids had the highest proportion of products with artificial dyes (96 percent) followed by fruit-flavored snacks (95 percent), drink mixes and powders (90 percent), and frozen breakfast foods (86 percent).”

CSPI is working to have the Food and Drug Administration ban Red 3, Red 40, Yellow 5, Yellow 6, Blue 1, Blue 2, Green 3, and Orange B (used in sausage casings). In Europe, foods that use synthetic dyes require a warning label that the product “may have an adverse effect on activity and attention in children”. The US has no such label.

Loaded with all this information, you might be feeling a bit wary like I was. The good news is that many products for kids and adults are now using vegetable dyes. And while vegetable dyes aren’t as vibrant as their petroleum-based counterparts (yuck), they’re natural and effortless to make, and that’s why I was so inspired to show you how to make natural dyes from vegetables.

These vegetable dyes can be used to color frostings and cakes, dip Easter eggs, tie-dye shirts, and everything in between! 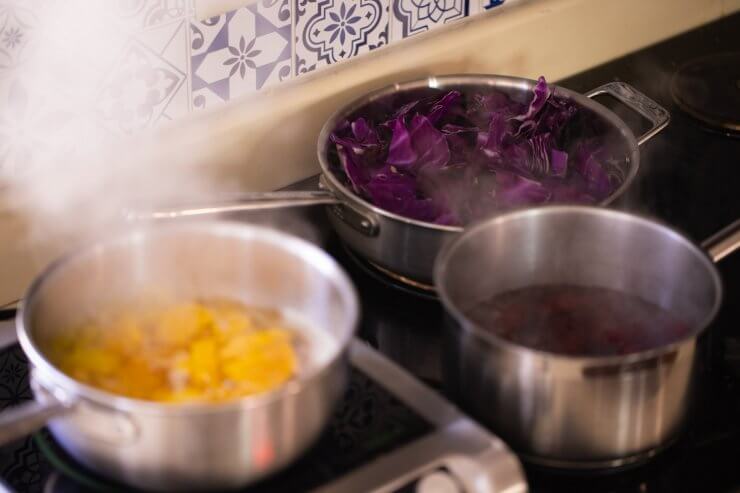 To make a full spread of natural dyes from vegetables, you only need to make the three primary colors: red, yellow, and blue.

But to have fun and experiment, in the video above, you’ll see Ruby and I made five popular colors: red, yellow, blue, purple, and green. Here’s how we made them:

Making Red Natural Food Dye from Beets: There’s no better natural red vegetable dye than beets! Simply peel and chop three red beets, then bring 2 cups of water to a boil and boil for 20 minutes. The color bleeds out quickly into the water. After 20 minutes, strain, and it’s ready!

Making Yellow Natural Food Dye from Golden Beets: Since red beets worked so well, I decided to try golden beets. They work! Boil three peeled, chopped golden beets in 4 cups of water for 20 minutes, then strain. The bonus: You can eat them after! I found that I needed to keep adding water to my golden beets; they seem to soak up water. That’s why I used 4 cups of water to make this dye instead of two like the red beets. You can also use turmeric.

Making Purple Natural Food Dye from Red Cabbage: Chop ½ a head of red cabbage, throw it into a medium saucepan, and bring to a boil with 2 cups of water. The water will become purple pretty fast, but boil for about 20 minutes or longer. When it’s ready, strain.

Making Blue Natural Food Dye from Red Cabbage: You’ll need baking soda for this one; it’s a bit of a magic trick! Just follow the same instructions for the purple dye, and then add baking soda when it’s done boiling. Easy peasy! To get a deep-sea blue, add 1 tsp baking soda and stir. Using more or less baking soda determines the shade of blue. If you want to make both purple and blue dye, boil a whole head of red cabbage, chopped, in 4 cups of water, then halve to make the blue.

Making Green Natural Food Dye from Spinach: For some reason, boiling spinach doesn’t have the same effect as the others, so for this one, we’re just blending and straining. In a blender, combine two handfuls of spinach and two cups of water. Blend until pulverized, then strain through a cheesecloth and/or fine mesh strainer to get out the grit.

If you have a juicer, you can also use carrots to make orange and coffee grounds to make brown!

For more concentrated colors, double-boil your colors. After you’ve made your colors and strained them, add them back into the pot and let simmer until they reduce in half or more. 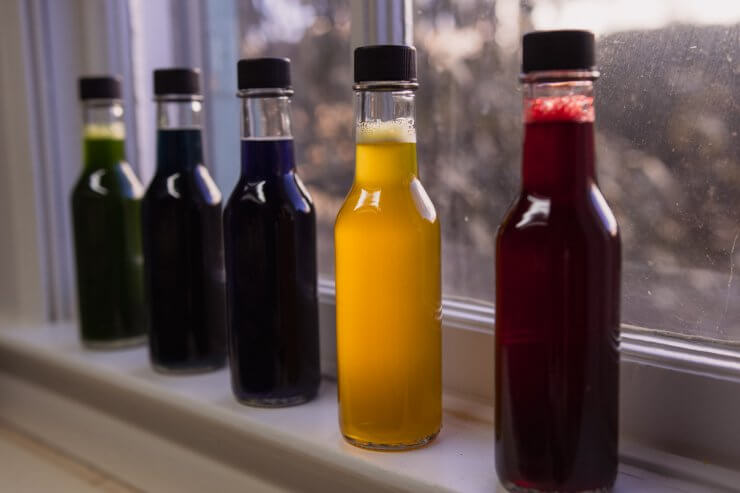 How to Use Your Natural Food Dyes

Now that you know how to make natural food dye from vegetables, you can use them for cakes, frosting, and lots of goodies. 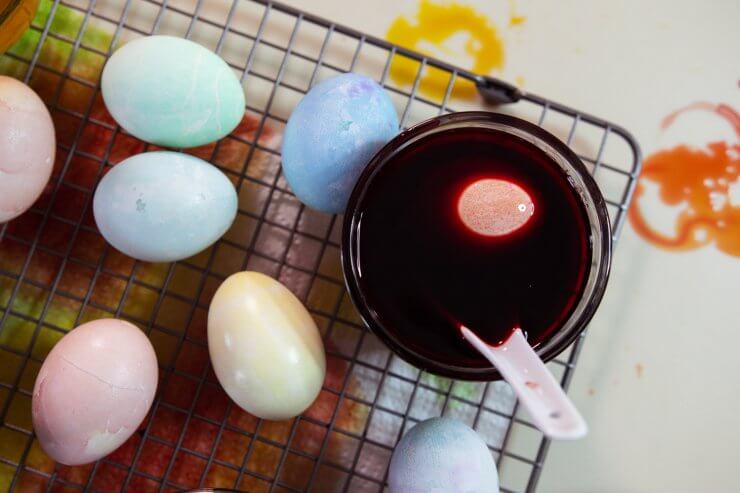 Since vegetable dyes are lighter in color and more pastel, they also make great dyes for coloring eggs.

Simply boil white eggs, then pour the dyes into small bowls with vinegar (1 tbsp per cup of dye), dip your eggs and leave for 15 seconds (or more) at a time.

Let’s make this collaborative! Share all your tips and tricks for making natural food dyes at home in the comments below. 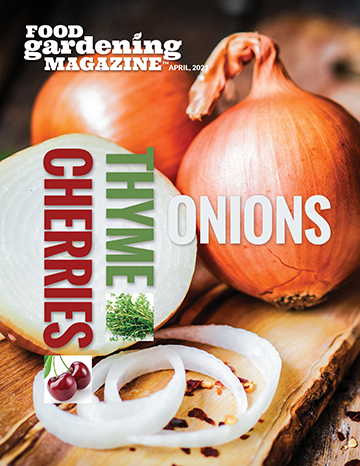