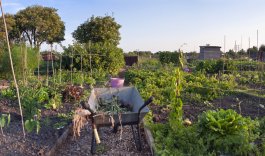 If you have a small backyard plot for your Freedom Garden, or a porch garden, or a space where you grow herbs beside your kitchen window, you might wonder what kind of crop rotation advantages really exist—or are possible—when your garden is a 10′ x 10′ square… Or smaller… Or bigger…

As tempting as it might be, it’s best not to grow the same crops in the same soil—open garden, raised bed, or container—for more than one growing season. Each plant takes certain nutrients from the soil and leaves others behind that may be beneficial to another type of crop. Some crops, especially root crops, onions and garlic which all grow underground, are susceptible to soilborne diseases or particular pests. For these reasons, you want to rotate your crops from growing season to growing season. This will help ensure better soil health and healthier, more productive harvests. This practice applies primarily to annual crops; perennial crops can continue to grow where they’re planted.

Now, in a perfect gardening world, you would be able to implement a crop rotation plan that spans decades. There are some soilborne diseases that can live in the soil for up to 20 years! Though, I don’t personally know anyone who plants once every 20 years.

Even so, it’s a good idea to switch things up from season to season. We’ll look at some more crop rotation advantages below. For now, here’s a list of vegetable crops by category. The general rule of thumb here is to plant crops on list 1, followed by list 2, so on and so forth. They go in this order because each category either has a disease that shouldn’t affect the crop after it, and/or leave nutrients in the soil that the crop in the following list needs.

And for a small garden, there are more simplified crop rotations:

Rotating between light feeders, soil enrichers, and heavy feeders is what much of crop rotation accomplishes but perpetuating the same pests and disease year after year are also an important factor.

So for example, when you have a heavy feeder like tomatoes, and follow them with soil enrichers like beans, you are replenishing the soil, and following them up with root vegetables which are light feeders. At that point, you could add beans back in before planting tomatoes again or attempt tomatoes right away.

A three-year rotation is a good rule of thumb, meaning you don’t plant the same crop in the same place any more than once every three years.

Succession planting is another component of crop rotation. For example, once your cucumbers are tapped out for the season, you can plant beans to enrich the soil before the winter and prepare it for the next crop.

Wondering about corn or other grains? Grains have their own complex rotation schedule between one another, though if you have a small backyard Freedom Garden and aren’t planting different grains in the same place each year, you could add in another rotation, which would be grains like corn and wheat. Plant them after legumes because legumes leave nitrogen in the soil that grains enjoy.

How much do you need to make it worth the effort? There’s an assumption that, aside from corn, you need acres and acres of grains like wheat to actually grow enough to do much with. That’s not entirely true. And, of course, it depends on the grain you grow. Here’s an example, though.

According to the Kansas Wheat Commission, one acre of land can yield about 37 bushels of wheat. That’s over a ton of wheat. I’m guessing that’s more than most of us need on a regular basis. However, you can grow around a bushel of wheat on a space a little over 33 square feet. That gives you enough to make about 90 one-pound loaves of whole wheat bread. That’s still a pretty fair-sized section of land, but it does add some perspective.

Oats are another small grain that offers crop rotation advantages, as well. Oats suppress weed growth and they are hardy enough to grow in poor soil. As an example, on commercial farms in Maine, an acre of land can yield up to 80 bushels, or more than 2,500 pounds, of oats. Again, a more practical version of that for Freedom Garden would be that we can get around 32 pounds of oats in a 23 square foot space.

Small grains also have some unique qualities that make them good for home gardens. Millet matures in as little as 30 days. Barley and some rye will overwinter for an early spring harvest.

Adding some of these into your crop rotation can help control disease and improve soil fertility and structure. Of course, one of the big crop rotation advantages is higher yields. That’s something we can probably all agree is a big benefit.

If you can’t do a complete crop rotation, consider alternating what you grow from one season to the next—a virtual crop rotation of sorts. With containers and raised beds, you have the option of changing out the soil, depending on what you want to grow there. Keep in mind that container soil, especially, will be severely depleted of nutrients at the end of the growing season and should just be replaced. 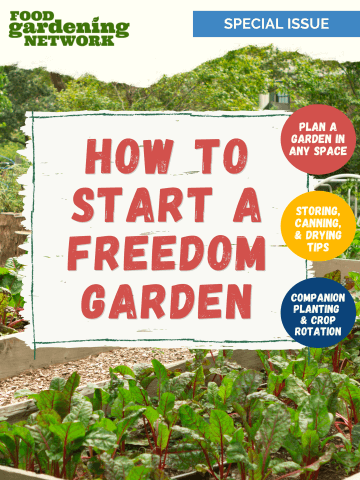